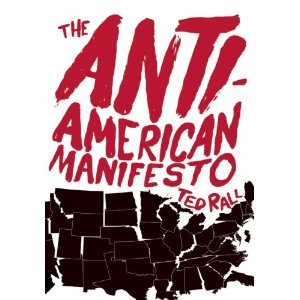 Oct. 1, 2010 -- PHILADELPHIA (Information Clearing House) -- I am touring to promote my new book. "The Anti-American Manifesto" lays out America's biggest problems and what we can do to fix them.

Before I started out, I knew that Americans were angry. With a real unemployment rate of 20-plus percent and a government that gave $1.4 trillion to banks instead of people in need, how could they not be?

Americans have lost faith in "their" government's willingness or ability to address their needs and concerns. But Americans' pessimism is deeper and broader than I thought. And their rage is burning white hot.

At the beginning of each event I ask attendees to answer two questions:

Question One: What is the worst problem that you face? Something the government could solve or at least mitigate? The top response is healthcare; either or they or someone they know can't afford to see a doctor. Other answers include making college affordable and improving mass transit. Some are arcane: at the top of one man's wish list is the metric system.

Question Two: What is the biggest problem the world faces today? Whether or not it personally affects you, what should be job one for government? Most people say global warming or ecocide in general. Many complain about poverty and income inequality.

"Now think about your two top issues," I ask them. "Do you think there's any chance -- not a high chance, not even a 50 percent chance, but any significant chance whatsoever -- that this system, our American capitalist system and the two-party political structure that supports it, will impact either one of those two issues?"

I reset for clarity. "Do you think you will see any improvement, on even one of those two problems, in your lifetime?" I ask for a show of hands. "Raise your hand if you have any faith, any optimism at all."

Depending on the city, between 10 and 30 percent of my audiences raise their hands.

Bear in mind, these are Ted Rall readers. Few if any voted for John McCain. So when the man they did vote for urges Americans of all political stripes "to stick with me, you can't lose heart," as he did in Madison recently, he's wasting his time.

According to the latest Gallup poll, 54 percent of Americans expect the economy to be the same or worse by this time next year.

If you're one of those 54 percent of Americans (or 70 to 90 percent of Ted Rall fans) who see the government as unwilling and/or unable to alleviate their suffering, what should you do?

In my "Anti-American Manifesto" I argue that the time has come to stop putting up with a regime so incompetent that it can't protect us from 19 clowns with boxcutters, who are allowed to fly around the nation's airspace for two and a half hours because our military prioritizes killing Muslims over defending the United States. I say that it's insane for the citizens of the richest nation in history to watch their living standards shrink while lawless corporations and a tiny cabal of ultrarich pigs feed off the public trough. Why should we accept a $1.4 trillion handout to wealthy bankers, while the unemployed are told to pack up their children and get out of their homes?

If you don't think the government will do anything for you, why not get rid of it?

There is one logical answer: because it could be reformed. Well? Could it?

Barack Obama is living proof that it cannot, that the system is broken beyond repair. Because, like him or not, this system is never going to give us a better president. We will not end up with a smarter, more well-intentioned person in charge. He's the best they've got.

Unfortunately, as we've seen since he took office almost two years ago, he's not good enough. As I wrote in my book, there's only one difference between Bush's policies and Obama's: opposition. Under Bush, there was a semblance of a Left.

So now Americans are faced with a choice. They can accept that nothing will ever get better, watch the rich get richer while they get poorer, sit on their butts as the planet heats up and the coral reefs die off.

Or they can act.