Why are teens and pre-teens always on their phones? The answers will blow you away. | Mickey Z. 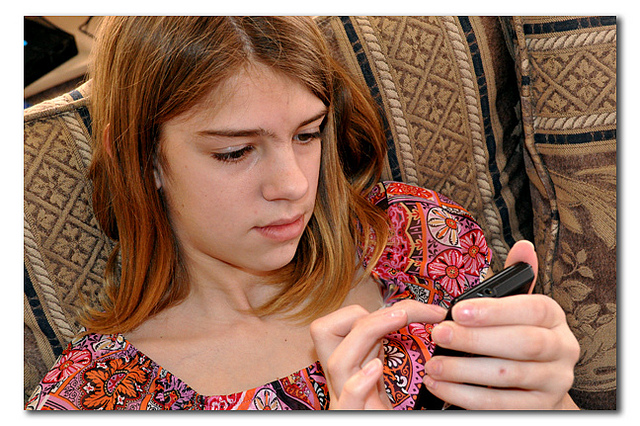 It ain’t exactly The Breakfast Club, but imagine a classroom filled with 12- or 13-year-old kids -- seventh graders serving after-school detention -- all of ‘em eating snacks while staring at their phones. Let take a closer look at six of these adolescents, shall we?

After watching the documentary, Fed Up, I decided I’d break down what each kid was consuming. From there, I was gonna' introduce you to the kids and explain what they’re doing on their phone. I only got through two such descriptions before the whole thing unraveled, in a hurry. Here are the two intros I wrote:

Daisy is in detention for missing so much school lately. Born in Mexico, she’s lived in the United States since she was a toddler. Daisy is downing her second Snapple Iced Tea (16 ounces = 50 grams sugar, 200 calories) as she frantically answers a series of texts from, um… “clients.” Four months ago, she was prostituted by two friends of her older brother. Since then, she’s been sold to buyers 10, 20, even 50 years older than her. Daisy has managed to keep this from her family but she suspects her brother knows after seeing the bar code tattoo on the back of her neck -- a tattoo which includes the name of her pimp (or “manager” to the liberal, post-modern crowd).

Donnie is the school’s star athlete but has, um, lost his motivation. This landed him in detention for skipping four straight baseball practices. Sipping on his Nesquick Fat Free Chocolate Milk (16 ounces = 54 grams sugar, 300 calories), Donnie is huddled in a corner seat, his eyes and mind fully focused on the images flashing on his phone’s screen. He started consuming “Gonzo” pornography two years prior and now spends up to five hours a day searching for more and more extreme videos.

This is where I dared myself to discover what “searching for more and more extreme videos” truly means in 2016. Before I address that, please allow me to introduce the other four kids:

3. Nate, a Black boy. He’s obsessed with video games, anything to do with the U.S. military, and revenge porn. What he’s doing on his phone during detention: playing a violent video game. When James goes on his shooting rampage, it’ll be Nate who sneaks up and disarms him. He’ll ride this “hero” status right into an enlistment in the Marines. He’ll be injured in Afghanistan and come home suffering from PTSD and become homeless. I might tie in another issue by adding in that Nate would eventually be killed by a white cop that just so happens to be Donnie. (But that might be way over the top, huh?)

Actually, yes. I do have to say more. Much more.

I’ve vacillated over how many details to share. Should I tell you about the rivers of blood, the permanent scars, the surgical needles and thread, and the medieval devices? Speaking of devices, do you wanna hear about the vast technological advances made in the name of sexual torture? How about the trope of severe humiliation and public degradation as a rapid fire path to arousal? Perhaps it’d be more telling to focus on the sadistic language of the captions? Would you even flinch if I spoke of live fishes and a funnel? Or even worse, would you immediately and excitedly click away from this article and go see it for yourself?

As Andrea Dworkin once said, “When your rape is entertainment, your worthlessness is absolute.”

With this as a cultural pillar (along with the poisoned food, the inherent isolation and alienation, the normalized violence and increasing white supremacy, etc.), I’ll sum up the primary point of this disjointed article: If we want even the hint of a chance at creating any worthwhile change, we can’t allow our children’s minds and bodies to be polluted -- on an hourly basis.

Mickey Z. can be found here.

"Why are teens and pre-teens always on their phones? The answers will blow you away." by Mickey Z. is licensed under a Creative Commons Attribution-ShareAlike 4.0 International License.
Based on a work at https://worldnewstrust.com/why-are-teens-and-pre-teens-always-on-their-phones-the-answers-will-blow-you-away-mickey-z.