When Technology Fails: A Book Review By Carolyn Baker 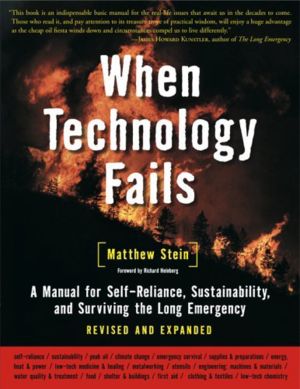 When Technology Fails feels as if it has erupted out of the urgent necessity of this moment. Its intention is unmistakable: to offer a "bible for emergency preparation and survival" as well as green and healthy living.

Feb. 10, 2009 -- Rarely in the specialized milieu of industrial civilization does one encounter a Renaissance man or woman-someone who is well-versed in a wide spectrum of disciplines and who can expound upon them in writing that is both articulate and engaging. So when I discovered Mat Stein's phenomenal When Technology Fails: A Manual For Self-Reliance, Sustainability, and Surviving The Long Emergency, I immediately contacted the publisher, Vermont's own Chelsea Green, for a review copy of this fabulous tome on preparing wisely for the end of the world as we have known it.

While this book at first glance may resemble something of a 21st century Whole Earth Catalog, it is so much more. Whereas that classic of some three decades ago served as a primer for individuals and groups seeking to live simply and sustainably, primarily because it felt good and seemed like the right thing to do, When Technology Fails, feels as if it has erupted out of the urgent necessity of this moment. Its intention is unmistakable: to offer a "bible for emergency preparation and survival" as well as green and healthy living. However, one should not assume that this book is a "survivalist" manual. It isn't about grabbing your bug-out bag with a few cans of beans in it and running into the woods dressed in camo. It is a book about surviving but also about living well in harmony with the earth community while using methods that allow one's lifestyle to endure and flourish.

The book begins by noting that technologies frequently fail and that the greater the number of earth's population and the more is consumed by it, the more the likelihood of irreversible failure of many aspects of technology. "Emergency preparedness," Stein says, "is cheap disaster and terrorism insurance." After offering a number of resources to introduce the reader to self-sufficiency, the book offers an explanation of the various threats now facing humankind: eco-threats, Peak Oil, bio and terror threats, and of course, natural disasters. As if to underscore humanity's intuitive sense of what lies ahead, Stein references the plethora of prophecies that have been around for millennia, originating primarily from indigenous peoples, and pointing to a culmination of catastrophes.

From here Stein launches into a chapter on short and long-term preparation-survival kits, first aid kits, and of course, food storage-recommending if possible, a cache of one year's supply. In the following chapter on "Emergency Measures for Survival", he includes not only the proper equipment and how to use it, but a remarkable section on developing a survivor personality and the importance of paying attention to one's intuition. Because some individuals may feel "intuition challenged"-as if they can't quite access it when they need it, Stein offers a "Testing Your Intuition" exercise which facilitates the process. Concluding this chapter and indeed all chapters in the book, are abundant references to books, websites, DVD's and other resources related to the topics at hand.