What 'Who Took Johnny' can teach us about filmmaking, 'sex' trafficking, and missing children | Mickey Z. 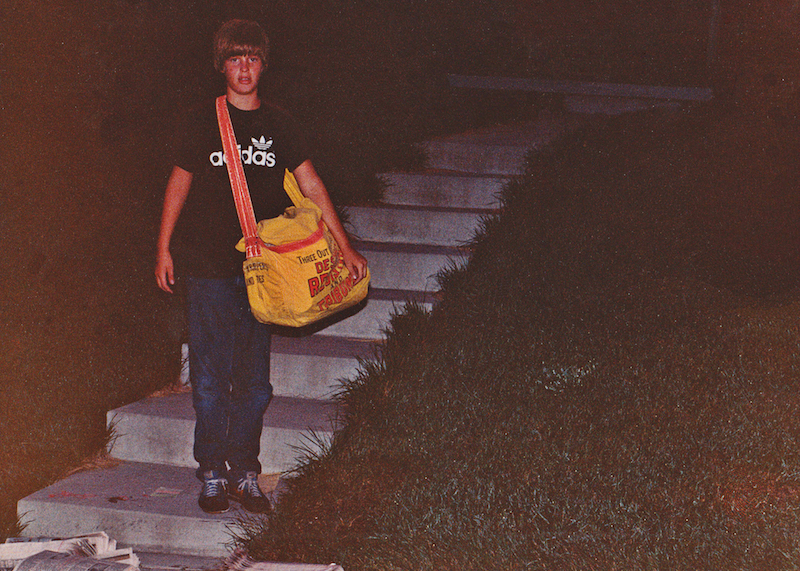 “Most of the films we make are about people fighting for what they believe in against incredible odds. Who Took Johnny is one of those stories.” (Michael Galinsky)

From the Who Took Johnny press kit: There are currently almost 90,000 unsolved missing person cases in the department of justice database, and it's clear that even with all of the advancements in technology and public awareness, the problem of missing and exploited children has only gotten worse since Johnny disappeared over 30 years ago. Understandably with such an ugly issue, people would rather skip-over reading about these stories or change the channel of a news report, pretending the problem doesn't exist, rather than confront the brutality of the exploitation and trafficking of children in our country.

I met Michael Galinsky and Suki Hawley somewhere around 1999, when they were making a documentary about Sander Hicks and Soft Skull Press. Hicks was about to publish my first book, Saving Private Power: The Hidden History of “The Good War,” hence it was inevitable we’d all cross paths. We did, we hit it off, and we stayed in touch -- zig-zagging across the realms of NYC art and activism.

Teaming with their partner, David Beilinson, Suki and Michael formed Rumur and together have created an array of essential, must-see documentaries, e.g. Battle for Brooklyn, Code 33, and Horns and Halos. Their most recent film, Who Took Johnny, led to us yet again land on common ground. Their film centers on the oft-hidden/ignored plague of pedophilia, child abuse, and “sex” trafficking, topics on which I’ve been writing and blogging.

Michael saw one of my recent articles, set me up to see Who Took Johnny, and this interview became inevitable.

Mickey Z.: I’ve always been moved by your work. For example, I wept through the last 30 minutes of Battle for Brooklyn. However, Who Took Johnny is straight-up haunting me. So, firstly, how did you get involved in this project?

Michael Galinsky: After a screening of Horns and Halos, a guy named Nick Bryant approached us and said, "I've got a story for you." He proceeded to tell us all about the Franklin Scandal. He was writing a book about this insane story of children being trafficked, black mail photography, bribery, and nefarious political shenanigans. We started to make a film about his efforts to tell this story, but it was just too big and there was no way we could get it funded. We tried, but we failed. We thought that the Johnny Gosch story, which was really just a small sideline to this bigger scandal, was a story that could be told as a film. It took another few years of trying but we finally got MSNBC to pay for a short TV version that allowed us to shoot the whole thing. Still, we were nervous about trying to make it.

Suki Hawley: The Franklin Scandal was horrendous, but didn't have any major characters we could follow and empathize with -- and up to then, that's the kind of film we were interested in making. The Johnny Gosch story had more empathetic characters and a really good one: a mother searching everywhere for her lost son but nobody would listen to her. MSNBC agreed to make a version for TV broadcast but also agreed to leave us the rights to making a feature documentary, which is what Who Took Johnny became.

MZ: I’ve researched and written about such issues but so much of this film floored me and/or took me by surprise, e.g. the lifetime dedication of Noreen (Johnny’s mother), the scope of this problem, how impossible it feels to address it when those in power will not step up or are perhaps involved. How about you? What surprised you? Where did Who Took Johnny lead you that you never expected to go?

SH: The whole thing was surprising and difficult to deal with, which is why it took us so long to make the film. I went through the same kind of reactions to the story that seem to happen culturally: first aversion and avoidance of dealing with the details of the story, then slowly coming to hear more and more that makes sense and is hard to deny. At that point, the passion for justice takes over because you can see Noreen's theories have merit and yet everyone is acting as if she's a crazy person. Upon seeing that no one was listening to her, it became important for us to at least give her a chance to speak and lay out her ideas on the events of the early '80's. The film never takes sides but presents what Noreen has to say, intercut with the other known evidence that exists (which tends to corroborate her theories). And the idea was if the film gained enough of an audience, then law enforcement would have to react to the information and explain why they did or didn't agree with Noreen's version of the events. That hasn't happened yet.

MG: It all surprised us at first, but then we started to see the patterns that were discussed. We would see the stories about pedophile stings and child porn stings where people were rarely named and nothing really came of them. The Johnny story was a lot less scary than the Franklin story because that was much more organized and much deeper. I think the hardest thing about the film was going with Noreen to shoot with the Collins family who were struggling to deal with the disappearance of their daughter. I don't think I have ever been as emotionally overwhelmed as I was in that situation.

SH: I, too, was floored by Noreen's commitment and dedication to the thankless job of finding out what happened to her son. In working on this film, it became obvious that most parents can't function when this type of thing happens and they rely entirely on law enforcement to carry out the investigation. The fact that she had the tenacity to dig into this so deeply on her son's behalf, while being actively deterred by law enforcement, was incredibly unexpected.

MZ: Through my writing and social media postings, I've learned firsthand how defensive people get (usually men, usually white middle-aged men) when confronted with word that their heroes are exploiters of children, pedophiles or pedo-apologists, e.g. Burroughs, Ginsberg, Jimmy Page, R. Kelly, Gore Vidal, Roman Polanski, Bowie, etc. Have you encountered anything similar and if so, can you share examples and/or any insights on the root of this dangerous reality?

SH: The idea of pedophilia is so abhorrent in our culture that most people say, "ick," and turn away, so as not to have to deal with it. But as Paul Sparrow says in the film, it exists in a way that shouldn't be ignored. I think the biggest way this is manifested is in the news stories when law enforcement does a big pedophile "sting" like around the Super Bowl, where they "round up" a group of 20-30 men, and haul them off somewhere. It's always an anonymous group, who are dealt with and whisked away so we don't have to think about that any more. Since working on this film, I've read the stories like this over and over, stories we usually avoid so we never notice how stunningly similar they are. There's never a follow up identifying any of the suspects, and we never know exactly what happened. As soon as our culture can come to deal with this in an emotionally mature way, the whole thing will be able to be examined honestly, and understood in the arena of complexities where it exists. Nothing is all black or all white. But when we don't deal with something in a culturally open and mature way, injustice and abuse continues.

MZ: Your film offers a frightening, much-needed reality check on such abuse. These nefarious predators go out of their way to abduct children from close-knit families in order to maximize the emotional pain and if such a child attempts escape, they are literally branded. As I said earlier, I am haunted by what I learned from Who Took Johnny. Have you heard from other victims, other families, or anyone else seeking ways to help end this scourge?

MG: The film has not really made it into the world so, no, we haven't heard from anyone else -- it simply hasn't been seen in a way that could make that happen.

MZ: So how can we change that? What's next for the film? How can readers get involved, spread the word, learn more about this issue and about Rumur?

MG: We currently have Who Took Johnny on Gathr so that people can set up theatrical screenings on demand. It works like Kickstarter. People can request a screening, but they have to get enough people together to make sure it happens. Currently, there are three screenings that are “gathring.” We also now have a distributor who’s working to get it on the different platform, like iTunes and Netflix.

Closing notes from Mickey Z.: I didn’t want to end this interview without tying up a few loose ends. Firstly, the fact that Who Took Johnny has not yet attained notoriety dramatically highlights the drastic need for more independent and socially aware filmmakers reaching more hearts and minds. Rumur’s work deserves a wide audience and our society desperately needs alternatives to the vapid, culture-reinforcing Hollywood spectacles. Learn more about Who Took Johnny here. Connect with Rumur here. Support Who Took Johnny on Gathr here. Spread the word.

Most importantly, I hope this interview has helped shine a light on the brutal and omnipresent reality of child exploitation and pedophile culture. Saying “ick” and then refusing to talk about it in polite society only enables this plague and its predators. Making excuses for high profile figures who exploit children and/or underage teens is nothing more than indefensible apologia. If you feel jolted and angry about this issue: speak up, get involved, and fight back! Ask yourself: how can I help and how soon will I begin?

Mickey Z. is the author of 13 books, most recently Occupy these Photos: NYC Activism Through a Radical Lens. Until the laws are changed or the power runs out, you can “like” his Facebook page here and follow his blog here. Anyone wishing to support his activist efforts can do so by making a donation here.

"What 'Who Took Johnny' can teach us about filmmaking, 'sex' trafficking, and missing children" by Mickey Z. is licensed under a Creative Commons Attribution-ShareAlike 4.0 International License.
Based on a work at https://worldnewstrust.com/what-who-took-johnny-can-teach-us-about-filmmaking-sex-trafficking-and-missing-children-mickey-z.