They Paved Paradise (Honk If You’re An Environmentalist?) | Mickey Z. 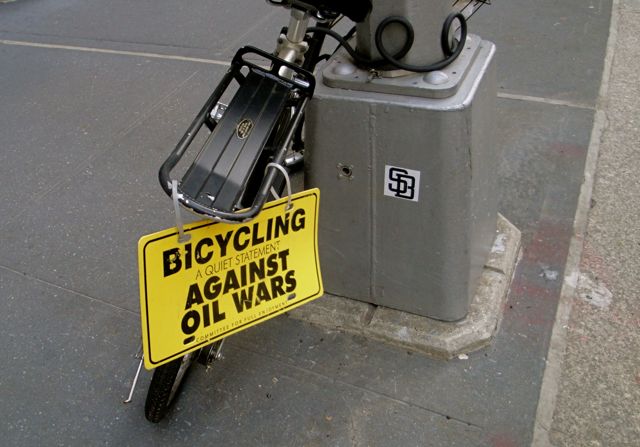 “In a sense the car has become a prosthetic, and though prosthetics are usually for injured or missing limbs, the auto-prosthetic is for a conceptually impaired body or a body impaired by the creation of a world that is no longer human in scale.”

(Lately, I’ve been saying plenty about meat-eating environmentalists so I figured it’s time to add in a little context, re: the automobile culture.)

From 1950 to 1970, the U.S. automobile population grew four times faster than the human population. In 1970, the U.S. Department of Transportation reported more than 89.9 billion vehicle miles traveled. By 2011, that number nearly tripled to more than 246.3 trillion.

The automobile and the lifestyle it inspires have risen to prominence through the power of relentless suggestion. There’s nothing delicate about car commercials and car toys and the hundreds of songs and movies that venerate the irrefutable gratification of owning an internal combustion engine of your very own.

We no longer consciously acknowledge the presence of cars on the street, the highway, and in driveways from coast-to-coast… not to mention the de-funded public transportation and the carchitecture -- myriad structures that exist exclusively to nourish the car culture -- e.g. highways, gas stations, strip malls, car washes, auto repair shops, car rental establishments, bridges, tunnels, and, of course, the fuckin’ suburbs.

It’s simply expected that practically everyone will become a motorist. Even radicals and dissidents (including environmental activists) regularly drive to protests and rallies -- their cars often adorned with bumpers stickers bearing eco-slogans.

Owning a car is considered a virtual birthright, an actuality not open for debate on any philosophical level. As a result, although cars have been around a relatively short time, the culture that facilitates their subconscious acceptance has quickly passed the point of any widespread scrutiny. Yeah, we own and drive a motor vehicle. Of course we do. Who doesn’t? And why wouldn’t we?

Why wouldn’t you? Here’s a small sampling:

Cars Kill Humans
During the 40 days of the (first) Gulf War, 146 Americans died keeping the world safe for petroleum while at home, 4,900 Americans died in motor vehicle accidents. The leading cause of death for children aged five to 14 in New York City is pedestrian automobile accidents. Each year, motor vehicle accidents claim the lives of 37,313 Americans. That’s 102 per day -- roughly equivalent to one major plane crash daily. Also, about 80 Americans are killed each day by car-induced air pollution.

Cars Kill Non-Humans
Each week in the United States, roughly 1 million animals are killed by cars, trucks, SUVs and other fossil-fuel-burning machines. That number, of course, doesn’t include household “pets.” In addition, that weekly death count does not do justice to the innumerable forms of life that perish when entire eco-systems are obliterated to make way for the auto-centric structures listed above.

Then there’s the use of non-vegan substances like anti-freeze, bio-diesel fuel, hydraulic brake fluid, and asphalt binder -- all of which usually contain animal ingredients. Finally, consider the faceless animals that suffer and die during the scientifically useless and morally indefensible laboratory testing of car-related dangers like gasoline fumes.

Sticker Shock
The average price of a new vehicle in 2008 was $26,477 but, according to authors Catherine Lutz and Anne Lutz Fernandez, the costs just keep coming. "The U.S. Department of Energy reported that the typical American household drove its average two cars about 22,000 miles per year," they write. "Most recent estimates calculate that driving costs the average American 66 cents a mile, or $14,000 a year per family to drive their two cars over the distance." (In 2007, Americans spent nearly 4.2 billion hours stuck in traffic -- more than twice the per-person average in 1982.)

Car Culture vs. Eco-system
Where do I begin? I could tell you about run-off, land use, air pollution, noise pollution, water pollution, solid waste, and impact on wildlife and not even scratch the surface, e.g:

Another World is Possible
Re-inventing human culture is, of course, a daunting task. But this process can commence with us opening our minds, recognizing what is consciously obscured, and tirelessly spreading the word. In the meantime, there are tiny choices we can make right now:

Drive a Hybrid: In terms of green activism in the realm of transportation, choosing a hybrid falls into the "hey, it's the least you can do" category. Unfortunately, since so much of our landscape has been altered as to make automobiles necessary, going hybrid is one of the only choices some folks have. If that sounds like your situation, you should also consider carpooling, car sharing, and hypermiling.

Get on Yer Bikes and Ride: Since 40 percent of everyday travel in the United States is trips of two miles or less, choosing to bike makes plenty of eco-sense. When Worldwatch Institute compared energy used per passenger-mile (in calories), they found that a bicycle uses only 35 calories per passenger-mile, while a car expends a whopping 1,860.

Walk: It's the ultimate all-natural, super green form of transportation,  but it's not just putting one foot in front of another. To make the most of your walk, consider shoes, clothes, hydration, posture, and companionship.

Become a Transportation Activist: It's one thing to recognize how automobiles have carjacked our culture, but what are we gonna do about it? As with all forms of activism, it starts with education and solidarity and succeeds with endurance.

Big Picture: What would you rather have: interstate highways or ancient forests? If you opt for ecosystem over economics, it’s time to dismantle the petroleum-based culture.

Days after he was first elected in 2008, Barack Obama made headlines when he pressured outgoing president George W. Bush to take steps to ensure a “viable auto industry.”

FYI: There was a related announcement made in November 2008… but this scoop did not hit the Reuters wire. The North American Earth Liberation Front (ELF) Press Office declared: “We have one message for the incoming Obama Administration: act to protect the environment or the ELF will.”

Note: To continue having conversations like this, come see Mickey Z. in person on Jan. 27 in NYC at Occupy the Climate: Hurricane Sandy, Eco-Activism, & the Vegan Option.