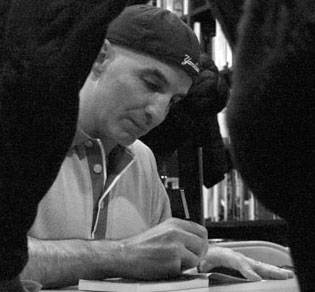 March 7, 2009 (Atlantic Free Press) -- The next in the Unprofessional Interviews series is Mickey Z., author of one novel, CPR for Dummies, and several fiction books and contributor to this site, ZNet, Press Action and others too numerous to mention.

I have been a visitor to his site for a number of years. I started going there because I was asked by someone at Spinwatch to review one of his books and I very much enjoyed his view of history combined with humour, which is sometimes blatant, sometimes hidden away in the corners but always disrespectful to the right people.

So this interview is a bit of an old pals act. An old pals act might seem a little unprofessional and as I have discussed many things with him, along with the ‘expendables’ on his website the tone of some of the questions is quite familiar. The interviews to follow will not be the same as I simply cold-called some of the other people.

However, if it all seems too unprofessional to you I suggest you look at the documentary “Spin: Behind the Scenes Manipulation of Mainstream News” and watch the politicians and journalists cooing at each other when they think the camera is off.

Michael Greenwell: Orwell, Huxley, Monbiot, Ursula Le Guin and many others have written or talked about the anarchist dilemma. In short the problem they all described in various ways is that a truly anarchist community that was peaceful and self-contained is always vulnerable to outside attack by more aggressive neighbours. Can you see any way around this?

Mickey Z: I agree that a truly anarchist society -- read: the threat of a good example -- would be attacked by all sides of the political spectrum but I’m not so sure such a society would, by definition, be either peaceful or self-contained. It could involve participants in the least likely places and also, would be unafraid to meet aggression with effective self-defense.

What is the most bizarre objection you have had to your work?

“Die painfully okay? Prefearbly by getting crushed to death in a garbage compactor, by getting your face cut-to-ribbons with a pocketknife, your head cracked open with a baseball bat, your stomach sliced open and your entrails spilled out, and your eyeballs ripped out of their sockets. Fucking bitch.”

Who is the biggest waste of oxygen on the planet?

If you could bring someone back from the dead temporarily so you could hear their analysis of current events then who would it be?

MZ: My mother, although we probably wouldn’t bother talking about current events.

Is there a book you reread often?

MZ: “Zen in the Martial Arts” by Joe Hyams. I’ve read it at least once a year for more than 20 years now.

Looking from outside if often seems like the USA is a loony bin. Is it?

MZ: This is god’s country,

There was a jokey MZ for prez campaign last time round. Under what circumstances, if any, would you consider getting involved in conventional politics?

What satisfaction do you take from your books?

MZ: If you have enough of them, they make excellent door stops and when the economic situation gets worse, I can burn them for warmth.

I know you like his music but can you tell me where Bono gets off?

MZ: He could call a press conference tomorrow, draw thousands of international journalists, and help change the course of human history by simply stating the realities behind our society/culture and urging his fans to wake the fuck up now. Instead, he brown-noses the Pope and blabs on about how much he loves Africa. If it weren’t for the music U2 continues to create, Bono just might be the biggest waste of oxygen on the planet.