BOOKS: The Unmaking of Israel. By Gershom Gorenberg | Jim Miles 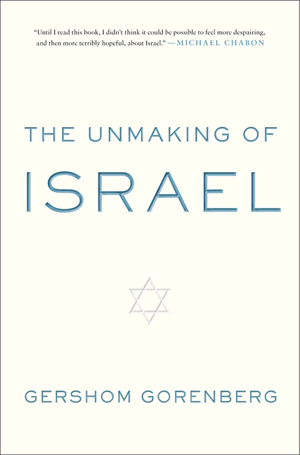 Feb. 21, 2012 (Palestine Chronicle) -- Many recent works are reflecting an internal crisis within Israel, part of which is the increased power of the ultra-Orthodox Jews within the educational, military, and political systems of Israel.

Gershom Gorenberg’s “The Unmaking of Israel” presents clear and well argued points concerning this aspect of current Israeli life and politics, and, as reflected in other works by Jewish writers, “The ongoing occupation, the fostering of religious extremism, the undercutting of the law by the government itself all threaten Israel’s future.”

Gorenberg’s thesis is narrowly focussed on this aspect of Israeli life, and while there are some arguable points of historical interpretation, his general argument is well presented and well thought out. It is not a work about the Palestinians per se, but about the nature of the ongoing occupation and all the hazards that it brings back to Israel.

It is about the nature of the settlements, and although this is not new territory (see Yakov M. Rabkin, “A Threat From Within,” Fernwood Publishing, Canada, 2006; and “Lords of the Land,” Eldar and Zertal, Nation Books, New York, 2005), his presentation is current with the ongoing trends of the settlements and Israeli politics. He looks at the affects on the military as the ultra-Orthodox constituency becomes political -- against its better wishes -- but also effectively so as a majority creator in the Knesset. His third thread is the increasing power of the ultra-Orthodox community in the manner in which the military is operated, and how that influences in turn the settlements and the occupation.

The second chapter provides a brief and generally accurate description of events following the nakba. Gorenberg discusses aspects of democracy within the new state and the fact that neither a constitution nor a Bill of Rights has never been crafted. Without a constitution to restrain political power (as opposed to democratic power), Gorenberg argues that the “deification of the state was even more dangerous than the potential concentration of power,” yet the “majority in parliament held nearly unlimited power.”

Compromises that were made then -- the financial support of the Orthodox haredi schools, the deferments given to men studying at yeshivot, Talmudic studies, from military service, the creation of a Rabbinic bureaucracy to control marriage -- were all seeds for the future. “No one imagined, for instance, that by funding haredi schools, the state would transform ultra-Orthodox society and risk ending up in the palm of its hand.”

As for the Palestinian Arabs, they were treated as “ethnic adversaries” rather than citizens to be integrated. The creation of new property laws, the exploitation of older laws from the Ottoman empire and the British Mandate, and the ongoing acceptance of the Jewish National Fund contributed to the double standards of Israeli Arabs being colonized citizens of a theoretically democratic state.

In “The Capital of Lawlessness,” Gorenberg discusses events post 1967 in relation to the settlements in the occupied Palestinian territories. After the war, settlements became a means by which Israelis could reclaim the land, and at the same time, “At driving wedges between Palestinian towns and preventing the emergence of a continuous Palestinian state.” Most of the section presents information that “in acquiring land for settlement, the state’s misuse of law was particularly blatant,” that the “new technique for acquiring land was to exploit local laws to establish that the property belonged to the state in the first place.... Everything was done according to law. But the law existed to serve the cause of settlement, not the cause of justice.” As Gorenberg argues, the occupied territory became “a realm where, ultimately, there was no law.” The end result of this lawlessness he argues, is that “Stone by stone, they were dismantling the state of Israel.”

The next chapter examines the next generation of the settler population. Supported by the state through large financial incentives, the religious settlement movement is “recasting nationalism, at its most tribal, as religious doctrine.” The newer outpost settlements are “the flagship project of the militant second generation” again violating Israeli law and international law. The result of the support for the outposts, “fomented the growth of a theologically driven far-right movement that saw the state and even the established settlement leadership as illegitimate.” Generally, Gorenberg gives examples of how settlements have ignored/abrogated/transgressed laws in the occupied territories. While the courts may at times uphold the law, generally the government, army and /or police involved take no action.

Religion, the military, and working life

The influence of the religious academies and their co-opting of the military is the subject of the next chapter. A later development augmenting the yeshivot studies of the Orthodox was the establishment of paramilitary academies. These academies present a viewpoint in which their becomes a risk of future insubordination or mutiny, and from the events surrounding the disengagement of 2005, “the state and the army have allowed the threat to democratic control of the military to grow.” Similarly, the government’s acquiescence to clerics in the military allows the “theological right ... to politicize the military,” and legitimizes “the religious right’s antihumanistic attitudes and its claim to be the voice of Judaism.” Gorenberg concludes “Israel evolves backward, returning to the moment of a fragile state facing an armed faction (Irgun -- Menachim Begin) dedicated to fantasies of power and expansion.” Only this time, it comes from within the army.

The final argument on Israel’s unmaking concerns the haredi role of civic society within Israel. Generally the haredi schools “provide scant preparation for earning a living and no preparation at all for participation in a democratic society.” By exempting the haredi from basic education and allowing the ultra-Orthodox to control the state’s religious bureaucracy, the state fostered a “burgeoning sector of society that neither understand nor values democracy.” The descriptions provided of the schooling and lifestyle of the haredi as fundamentalists is reminiscent of the criticisms many on the right in the west attribute to the Muslim madrassas, and indeed of the Christian fundamentalist right.

The influences of this sector are felt in politics, education, the economy, the military, the courts, religious institutions, and in arguments as to who is really Jewish.

The final arguments concern the “importation” of the settler’s ideology into Israel proper, behind the Green Line. This has several facets. One is the ongoing ethnic struggle for land, where “settlers” are encouraged to live in areas that are predominantly Arab, or in cultural boundary areas between Arabs and Jews. In a sense Israel has created a burgeoning one state solution, as the “Green Line had truly been erased. Israeli cities and West Bank hills were fronts in the same war.”

Another facet was created when Avigdor Lieberman and “Israel is Our Home” party joined a coalition with Netanyahu’s Likud. This created an “intense effort to use parliamentary power against basic democratic principles.” A declaration of allegiance to Israel as a “Jewish and Zionist state” did not receive sufficient support, but another bill introduced the same idea for civil servants and yet another for employees of the film industry, and a third required it for immigrants other than those entitled under the right of return law. Another bill allowed housing segregation in community settlements.

Gorenberg’s solutions are obvious in consideration of his thesis and supporting arguments. He sees three basic threads:

A discussion on how to repatriate the settlers indicates that “For Israel to move forward, most settlers must move home.... The point of evacuating settlements is to end the ethnic conflict, not to import it.” With the more recent activism by Jewish and other supporters of Palestinian/Arab rights (the BDS movement is not mentioned, but “international pressure” is) Gorenberg concludes “The settlements do not improve Israel’s bargaining position: rather, they destroy Israeli credibility and chain Israel to the occupied territories.”

The solutions offered by Gorenberg make a great deal of sense, and generally amount to unravelling the complicated web of military, religious, and political structures that have developed over the decades since Israel was formed and in particular since the start of the post 1967 occupation. If Israel existed in an isolated scenario these solutions would be difficult enough to enact.

There is a larger position to consider. Israel’s overall economy now reflects the general trend of right wing governments, with corporations and the military fully entwined in the political arena (see “Start-Up Nation -- The Story of Israel’s Economic Miracle.” Senor and Singer McClelland & Stewart, Toronto, 2009. While extolling Israel’s “miracle” economic growth, it also illustrates the intertwined roles of the army, education, the government, and corporations (free enterprise it isn’t). The union of right-wing theocracy with right wing political ideology will be a difficult arrangement to overcome, as the ability to control the population becomes one of the main enterprises of the now corporate-military state.

The United States is a prime example of this. While espousing the virtues of freedom and democracy, it has in the past decade enacted many laws that take away many citizens’ rights, and has abrogated and ignored many other laws from their own Constitution to international law. The United States is Gorenberg’s biggest miss in his discussion. Israel is either a U.S. outpost of militarized corporations, or the United States is Israel’s puppet fighting for its empire in the Middle East -- perhaps a bit of both. With more than $3 billion annually in aid -- with much more in military ordinance and military, technological, and security information trading between the borders -- not only does Israel need to resolve its internal problems if it is to survive as a democracy (already an arguable proposition), it will also have to resolve its relationship with the United States.

Israel tends to use or ignore the United States as it best sees fit for its own purposes. With several hundred nuclear weapons and a technologically advanced military, Israel will continue to exist in one form or another for a long while. Whether it does so according to Gorenberg’s suggestions, all worthwhile and valid, will also depend on how it deals with its ties to the U.S. empire.

“The Unmaking of Israel” is a worthwhile study in current political thought in Israel from the Jewish perspective looking for a fair, equitable, and democratic state, alongside the same for the Palestinians. I would like to see an addendum, or perhaps a whole new volume with suggestions on how Israel will deal with its U.S. ties, ties that will continue to limit its abilities to become what Gorenberg suggests.