The Truth About Amy Cooper (Hint: She’s not the “Karen” in this story) — Mickey Z. 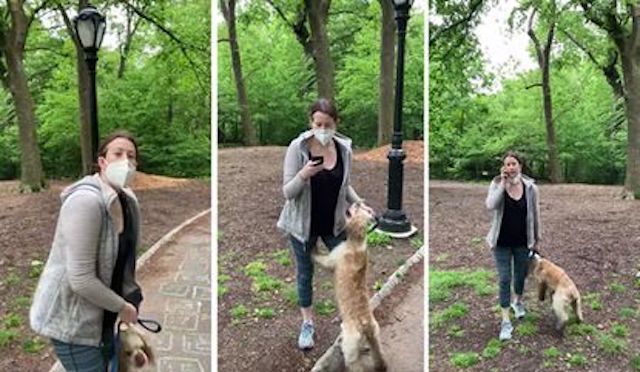 It’s been more than a year but I’m guessing each of you could still recite a basic description of the “Central Park Karen”: A privileged white woman called the cops on an innocent black male bird watcher simply because he politely asked her to leash her dog, as per the rules in that part of NYC’s Central Park.

The "racist woman" is Amy Cooper. The "black victim" is Christian Cooper (no relation). I’ll call them Amy and Christian for the sake of clarity. Christian filmed Amy’s 911 call. What we all saw on that very brief video eventually cost Amy her job and her dog. She and her family received death threats. Until the charges were logically dropped, she even faced criminal charges. Amy was forced to leave the country and is still in hiding. On more than one occasion, she has experienced suicidal ideation.

As for Christian, the gay black man was basically canonized. After all, he is a Harvard University grad, former Marvel Comics editor, and a current member of the board of directors for the NYC chapter of the Audubon Society. The notoriety from the incident even landed him a book deal. In June 2020, then-candidate Joe Biden praised Christian and re-tweeted a video Christian made to endorse Biden. See that here. 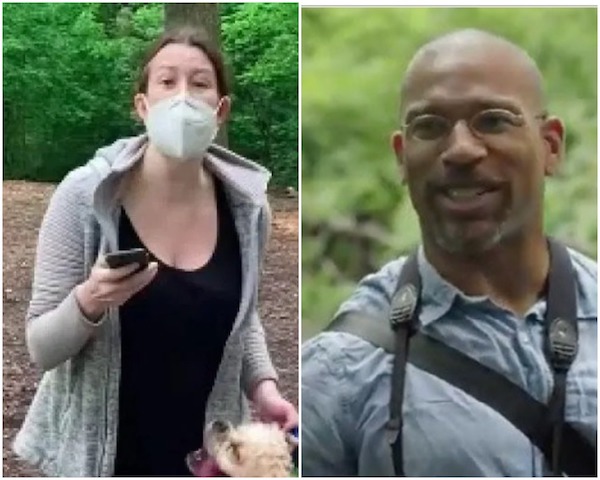 Amy is finally starting to share her story on podcasts like The Fifth Column and Honestly with Bari Weiss. (I got my information from those podcasts and then did some follow-up searching.) Amy says we don’t know the whole story. But this is not a "he said/she said" situation. It’s more like “they said.” You see, Christian has verified all of the same facts Amy tells in her story. In fact, he made a Facebook right after the May 2020 confrontation to share what happened with his friends. Here’s a snippet:

Central Park this morning: This woman’s dog is tearing through the plantings in the Ramble.

ME: Ma’am, dogs in the Ramble have to be on the leash at all times. The sign is right there.

HER: The dog runs are closed. He needs his exercise.

ME: All you have to do is take him to the other side of the drive, outside the Ramble, and you can let him run off leash all you want.

HER: It’s too dangerous.

Let’s pause for a minute. Amy was wrong to let her dog walk unleashed in the Ramble. But who’s the Karen here? Christian witnessed a minor city park infraction and immediately set about enforcing the law himself. In fact, he was known amongst birders for such behavior. Just two days prior, he was on a Zoom Community Board meeting demanding more police presence in the Ramble to enforce the leash rules. Yes, you read that correctly. The black guy was asking the NYPD to be more present and more aggressive with those most heinous of criminals, dog walkers. Anyway, after making a public threat in an empty and isolated section of a massive park (“Look, if you’re going to do what you want, I’m going to do what I want, but you’re not going to like it.”), here’s how Christian retells the rest of the story:

ME: We’ll see about that…” before adding, “I pull out the dog treats I carry for just for such intransigence. I didn’t even get a chance to toss any treats to the pooch before Karen scrambled to grab the dog.

That’s when I started video recording with my iPhone, and when her inner Karen fully emerged and took a dark turn.

You see, the sainted Christian Cooper regularly carries around dog treats to deal with “intransigence.” He does not own a canine. The man literally goes to the store and purchases dog treats as a way of intimidating dog walkers from interrupting his beloved birdwatching hobby. Four other people have already reported being confronted by Christian and his dog treat ploy (including the same vague threat). One, a black man, has publicly shared his story. The other two people are white. They're afraid to talk for fear of being labeled racists. 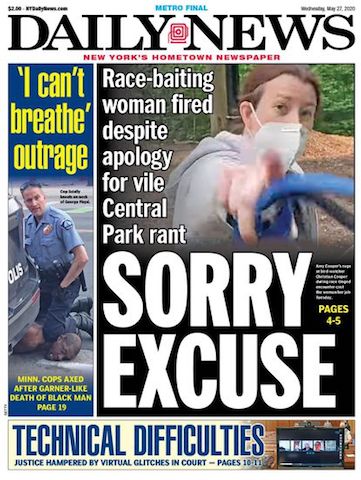 Christian only filmed Amy as she called 911. Viewed out of context, that short video gives the appearance that Amy is overreacting — perhaps even performing. It turns out, the 911 operator couldn’t understand what Amy was saying due to a bad connection in the heavily wooded part of the park. The operator kept asking Amy to repeat her story. As a result, Amy got louder and more upset. (She would later reveal that she had been sexually assaulted in college and was starting to feel truly frightened.) This somewhat explains why she used the term “African-American man” more than once but again: She was responding to the NYPD operator’s multiple requests to repeat her complaint.

Did she need to say “African-American man” at all? You can decide that for yourself. What matters most is that the brief video snippet that went viral offered NONE of the above crucial context. In fact, look at Christian’s aggressive tone in his transcription above. Then watch the video and juxtapose it with the victimized tone of voice he chooses as begs Amy to not come close to him. Who’s the performer here? Still, a woman’s life has been ruined for reporting a threat. Meanwhile, a man behaved like a textbook “Karen” and got himself a book deal and retweet from the next president.

Oh yeah, there’s one more important fact to consider. Later that very same day, another video went viral. This one featured a certain Minneapolis cop kneeling on the neck of a man named George Floyd. Amy never stood a chance. A nationwide narrative had been formed that it was “open season” on black men. Amy Cooper became the ideal scapegoat for the late May 2020 "racial reckoning." To repeat: She lost her job, her dog was taken from her, she received death threats, she has been suicidal, she was charged with a misdemeanor for allegedly filing a false police report, and she is still in hiding. #Woke justice is a form of mob justice and this is what it looks like.