The Sound of One Wing Flapping | James Howard Kunstler 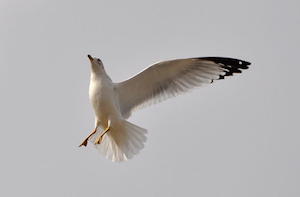 And suddenly the storms of early Trumptopia subside, or seem to.

The surface of things turns eerily placid as the sweets of May sweep away the toils of an elongated mud season. Somebody stuffed Kim Jong Un back in his bunker with a carton of Kools and the Vin Diesel video library. France appears resigned to Hollandaise Lite in the refreshing form of boy wonder Macron. It’s been weeks since The New York Times complained about the Russians stealing Hillary’s turn as leader of the free world. We’re given to understand that Congress managed overnight to cook up a spending bill that will avert a Government shut-down until September. Rest easy America… oh, and buy every dip.

A calm surface is exactly what Black Swans like to land on, though by definition we will not know they’re out there until our reveries are broken by the sound of wings flapping. Some kind of dirty bird showed up on Canada’s thawing pond last week when that country’s biggest home loan lender suffered a 60 percent pukage of shareholder equity and had to be bailed out -- not by the Canadian government directly, but by the Ontario Province’s Health Care Workers Pension Fund, a neat bit of hocus pocus that amounts to a one-year emergency loan at 10 percent interest.

If that’s a way for insolvent public employee pension plans to find enough “yield” to meet their obligations, then maybe that could be the magic bullet for the USA’s foundering pension funds. The next time Citibank, Goldman Sachs, JP Morgan, and friends get a case of the Vapors, let them be bailed out by the Detroit School Bus Drivers’ Pension Fund at 10 percent interest. That ought to work. And let Calpers take care of Wells Fargo.

The situation across Western Civilization is as follows: virtually every major financial institution has become a check-kiting operation or a Ponzi scheme, and we’ve reached the point where they can only pretend to be rescued. Bailout or not, the Toronto-based Home Capital Group is still stuck with shit-loads of non-performing sub-prime mortgage loans -- its specialty -- and Canada’s spectacular real estate bubble has hardly begun to pop. The collateral is starting to turn, like dead meat in the May sunshine, and the odium will waft across the border.

It doesn’t take much to blow things up, as the world discovered in several other historically recent episodes. The 1998 banking contagion started with the collapse of Thailand’s currency, called the baht. I doubt you could count on one hand the number of people in Wall Street or the Federal Reserve (with its 300-plus PhD economists) who gave a flying fuck about the Thai baht. Before you knew it, South Korea and Indonesia started whirling around the drain. And then Russia felt the suck. And then the Nobel Prize winning economists at a Connecticut hedge fund called Long Term Capital Management found out the hard way that their “secret sauce” investment formula which “could not fail in the life of this universe or several like it,” fatally poisoned its balance sheet on a repast of Russian sovereign bonds after only about 18 months. And it took all the poobahs of American banking to paper over the firm’s death about five minutes before the global banking system would shut down via the greatest daisy chain of cross-collateralized financial booby-traps ever assembled.

And 10 years later, there was the fiasco of 2008, starring Lehman Brothers and a demonic host of grifters trafficking in worthless bonded debt around the sub-prime mortgage racket tied into a toxic web of “derivative financial products” -- i.e. bad bets between insolvent counter-parties masquerading as “insurance” against unsound investment. Trillions of bailout monies conjured out of thin air fixed that, oh yes it did!

So enjoy the festivities around the Maypole today, and the suddenly calm waters of global affairs, and keep your ears pricked for the sound of wings flapping.

James Howard Kunstler is the author of many books including (non-fiction) The Geography of Nowhere, The City in Mind: Notes on the Urban Condition, Home from Nowhere, The Long Emergency, and Too Much Magic: Wishful Thinking, Technology and the Fate of the Nation. His novels include World Made By Hand, The Witch of Hebron, Maggie Darling — A Modern Romance, The Halloween Ball, an Embarrassment of Riches, and many others. He has published three novellas with Water Street Press: Manhattan Gothic, A Christmas Orphan, and The Flight of Mehetabel.
back to top