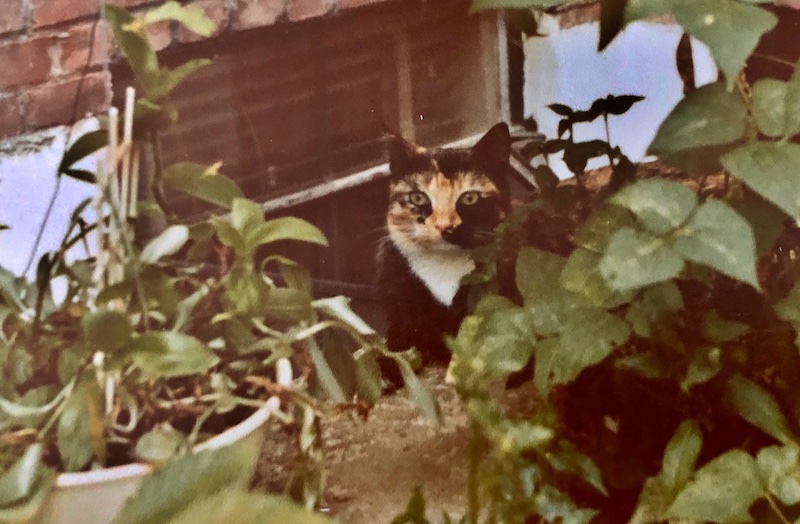 “I believe cats to be spirits come to earth. A cat, I am sure, could walk on a cloud without coming through.” (Jules Verne)

I grew up sharing space with cats since I was four years old and my family adopted a kitten we named Rusty. This imprinted felines onto my psyche in a profound way. It’s been decades since I’ve lived in a building that allows pets yet my bond with cats remains as strong as ever. I feed local strays, fawn over bodega cats, visit NYC’s cat café when I can, and regularly overdose on kitteh memes and videos.

There are other interesting manifestations of my cat connection. This confession may sound odd but I’m certain I’m not alone. Sometimes, when I turn out the lights and hit the sack, I experience the sensation of a cat jumping up onto my bed from the floor. The gentle landing and subtle shake of the mattress is a feeling I remember well. And I always need a moment to remember that I do not have a feline companion. Or do I?

These are not the only magical kitty moments I’ve encountered. When my parents moved to Texas, I visited them often. This meant spending lots of quality time with Tina and Mr. Lucky. After a week or so, I got awfully used to the two cats scurrying about. When I’d return to my apartment in Astoria, I could swear I’d occasionally catch sight of them out of the corner of my eye. Having recently acclimated to the presence of felines, my brain would initially process it as nothing out of the ordinary. After a beat, I’d do a silent-movie-level double-take and end up disappointed that I was indeed alone. Or was I? 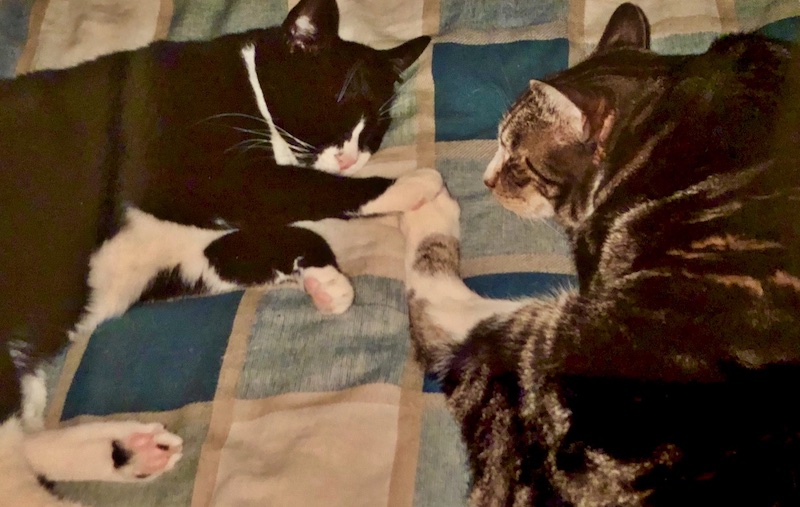 Tina and Mr. Lucky holding hands during a nap

Then there was a more persistent variation on this theme. I was married at the time and my wife’s parents asked if we could “foster” their cat (Boots) while they took a two-week vacation. After much cajoling, our landlord gave us permission and Boots arrived for his stay. We loved his presence (except for the very early breakfast wake-up calls). I can still recall sitting at my desk, working on a film screenplay. Boots insisted on laying across my lap, leaving me to position my hands awkwardly to reach the keyboard. I wondered aloud if this how William Goldman got his start.

After two weeks, we kissed Boots a tearful goodbye and I’m guessing you can surmise where this is going. Yep, you simply cannot tell me that Boots didn’t visit us every now and then over the next month or so. My wife and I kept catching glimpses of him here and there throughout our small one-bedroom apartment. And yes, both of us “felt” Boots jumping up onto the bed to join us as we slept — even though this couldn’t be true. Or could it?

Type in something like “mystical powers of cats” into your nearest search engine. Results range from claims of cats secretly being dragons to reports on the healing powers of a feline’s purr. Most interesting to me were the copious anecdotal reports that dovetailed with mine. More than a few folks touted the astral travel skills of your average house cat. This would somewhat explain how cats, um, “related” to me could miss me and come visit. However, I still don’t know who is responsible for the bed-jumping sensations I occasionally feel today.

As a lifelong question-asker, I do my best to stay open to as many possibilities as I can. Simply put, I cannot prove or disprove any theories about a cat’s ability to engage in astral projection. And neither can you. However, there is one particular bit of feline magic I witnessed and documented firsthand. You see, once Rusty moved in a million years ago, my mother and sister became cat ladies for life. As for me, well, re-read the above. I’m addicted. My Dad? That was a more complicated process. 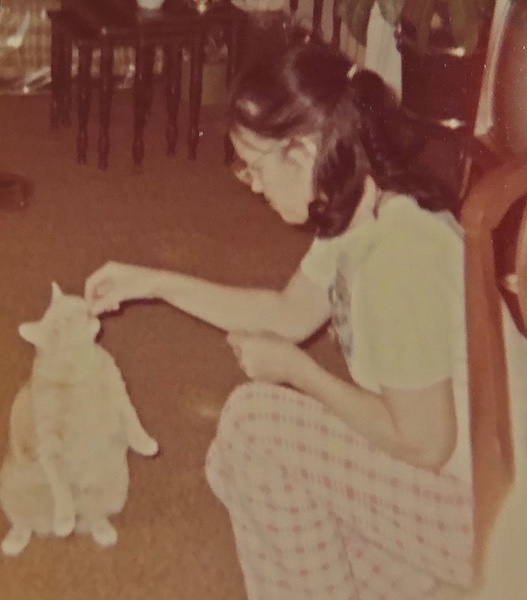 A very young version of my mother with Rusty

He welcomed Rusty because he saw how badly the rest of his family wanted her. Being a great father, he agreed. Next came the legendary Shanty (I saw her take on a German shepherd — and win). Then my all-time favorite, Pumpkin Puss (see photo up top). Before long, there was an endless array of cats passing through our humble abode. In one instance, a tabby named Abigail gave birth to six kittens in my sister Debra’s bedroom. We ended up keeping two of them. Missy was bonded with Debra. The other kitten was Ditto.

Ditto was named because he kinda-sorta looked like Shanty (who got her name because she was found in a neighbor’s backyard shanty). My Dad had warmed up considerably to the never-ending parade of cats but Ditto stole his heart. This strange little boy loved to eat saltine crackers and lettuce. It was completely normal in my home to enter the living room and find my federal agent father patiently holding a cracker for Ditto to (very sloppily) munch on. 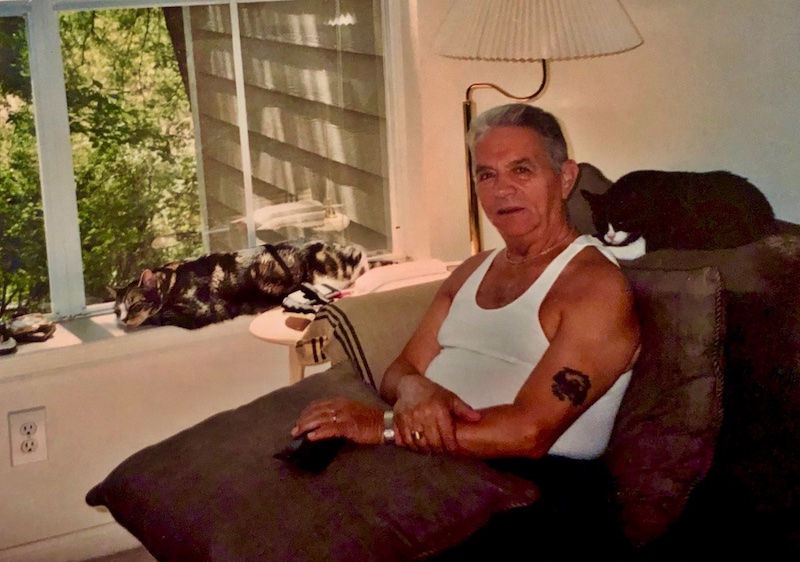 Fast-forward to Texas: Both of my parents religiously fed the strays near their apartment complex. One particular cat, a tortoiseshell, really clicked with my Dad and his “cat lady” status escalated. Even after my mother (and Mr. Lucky) passed away, Dad never missed a day feeding his outdoor friends — until he had to spend time in the hospital. I flew down immediately and please allow me to introduce a brief sidetrack of me seeing my poor sick Dad in the hospital. 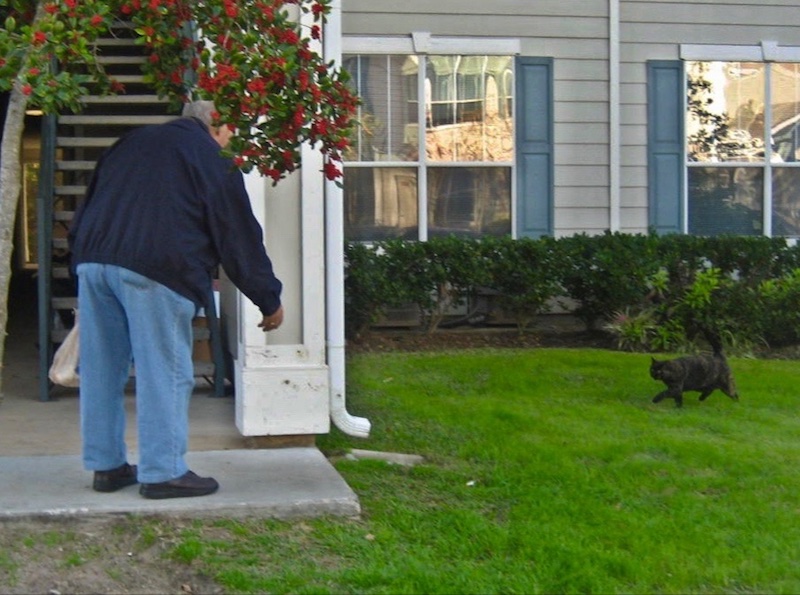 Dad was very disoriented and, at times, could be difficult with the staff. My sister opted to not tell him I was coming. She picked me up at the airport and let me drop off my stuff at Dad’s apartment. After she and I fed the tortoiseshell, it was off to the hospital. Debra entered the room first, saying: “You have a visitor.” I waltzed in and will never forget the expression of surprise and deep love on my father’s face when he saw me.

“I can’t believe you’re here,” he gasped. I assured him that as soon as I heard he was sick, I booked a flight. “That’s because you’re my guy,” was Dad’s response. I often replay those words in my head whenever I’m missing him more than usual. 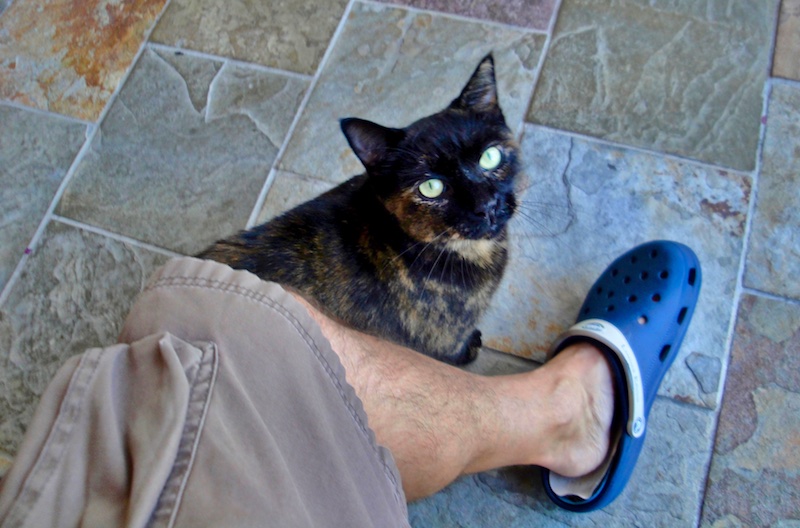 Later, as I sat by his bed, the confusion suddenly returned. He tried to spring to his feet. I jumped up to keep him in place. “What’s wrong, Dad? Where do you wanna go?” He pointed at the clock and earnestly declared: “It’s past four o’clock. I’m late to feed the cat.” I gently explained that he was in the hospital and I would handle the stray-feeding until he was back home. We had to go through this routine a few more times before he finally settled down.

My Dad lived another year or so in that apartment and fed the tortoiseshell right up to the end. When he had to move to a senior center, Debra arranged for some of Dad’s neighbors to take care of the strays. 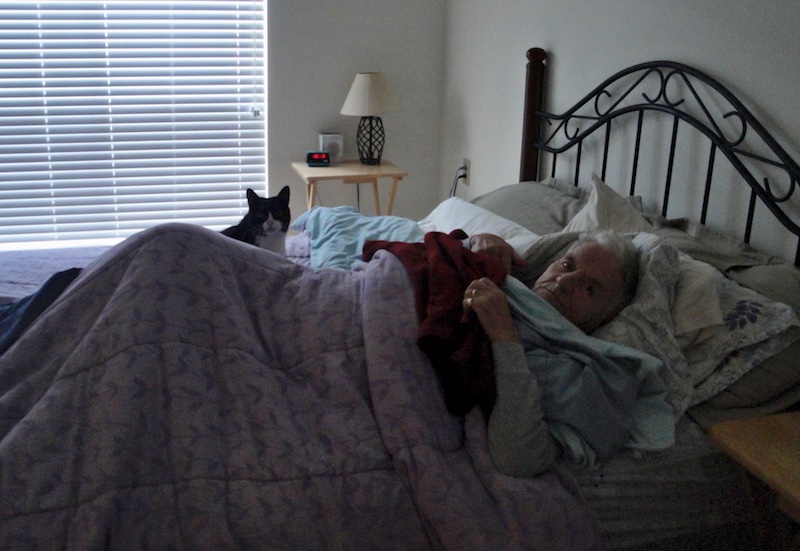 Dad and Tina, in their later years

So yeah, I very much believe in the supernatural power of cats. After watching my Dad happily transform into his own version of a cat lady, I have no doubt that these incredible felines carry with them some very special and unique gifts — if we’re willing to remain receptive and open.

Coda: My Mom would've turned 85 on February 20. If there are cats in heaven, you can be certain that, between her and my Dad, those felines never go hungry.