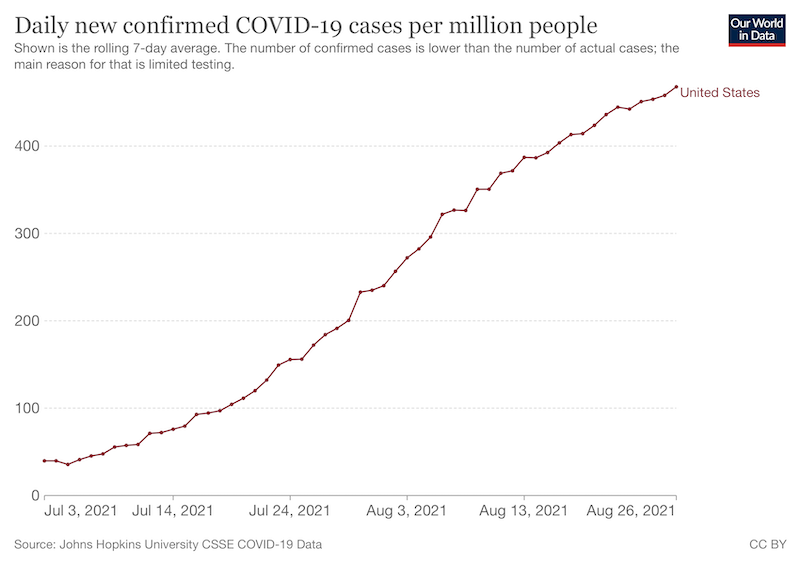 The Truth About Why Covid’s Never Going Away: The world is not vaccinating people fast enough

Aug. 29, 2021 (Eudaimonia & Co) -- I want to tell you a story about one of the greatest heists ever. You might not know it, but you were probably both an accomplice and a victim, tricked into picking your own pocket. This is the story of the Great Covid Heist.

Covid’s exploding all over again in America. Averaged, cases are hitting levels they haven’t since last autumn. But averages can be deceiving things. On Aug 23rd, there were 266,000 cases. That is, so far the fourth highest total for Covid cases in America — ever.

On one level, this story is one that’s all too familiar, dispiriting, and stupid. America’s Red States became the world’s Covid Belts, some of its hottest hot zones. And so when a new variant surged across the globe, Red Staters did what they’re what now laughed at for around that world. They refused to wear masks. They screamed and threw huge baby tantrums. They called making kids wear masks “tyranny” and “fascism.” Of course, they didn’t get vaccines. And because American Idiots like this are in control of Red States, governors like DeSantis in Florida and Abbott in Texas, already prodding marching backwards into the middle ages, declared basic public precautions like masking and social distancing the enemies of “freedom.”

There’s a kind of direct, dismal relationship between the American Idiot and Covid. And so the Delta wave did what it was always going to do: rip across America with a special vengeance. America’s not New Zealand or even Australia, countries which, for all their shortcoming and flaws, aren’t completely backwards, naive, and self-destructive. For the American Idiot, Covid is a kind of apocalyptic test which separates the strong from the weak, the faithful from the faithless, the pure from the impure.

But you know all that. And the truth is that this particular story cuts much, much deeper than that. If you really want to think clearly about it, let’s try to, from a more fundamental level altogether, using as much reason and logic and directness as we can muster.

Why is Covid ripping across America? Because there’s a new variant. There are a lot of new variants, in fact. Delta is just the first. Then there’s Delta Plus, Lambda, and so on. These variants are going to reach every country on the globe. The question is just whether or not a nation is prepared for them. America clearly wasn’t — it’s a society made of about half idiots at this juncture in history, like all those poor morons who denied Covid was a problem, and then died from it, acknowledging only in their very last breaths how wrong they’d been.

But a society should never be at the mercy of people so foolish they only acknowledge reality when it’s too late. How many such people are there, though? The answer to that question is a lot grimmer than Americans realize. Let’s continue our little analysis to illuminate it.

Covid’s ripping across America because it ripped across the world yet again because there was a new variant. Why was there a new variant? For a painfully simple reason. The world is not vaccinating people fast enough. What does that mean?