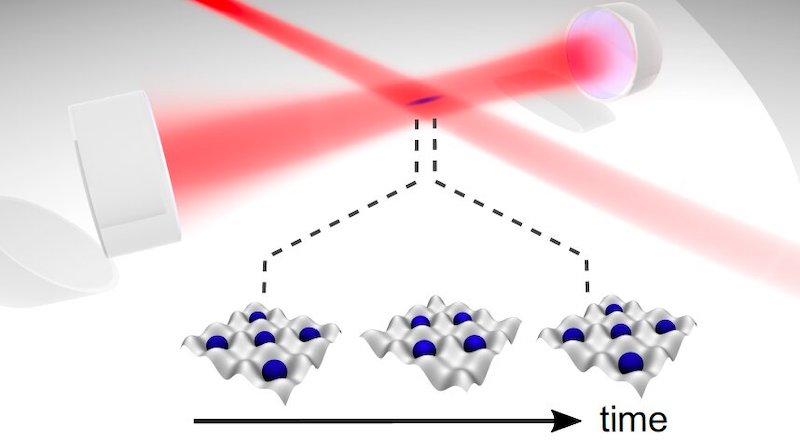 Sketch showing the optical cavity with the Bose-Einstein condensate at its centre. Credit: Keßler et al.

Sept. 3, 2021 (Phys.org) -- Researchers at the Institute of Laser Physics at the University of Hamburg have realized a time crystal in an open quantum system for the first time. Their paper, published in Physical Review Letters, could have important implications for the study of exotic phases of matter in quantum systems.

"The primary objective of our research is to investigate dynamical phases of matter known for how their properties change over time in an orderly manner," Hans Keßler, one of the researchers who carried out the study, told Phys.org. "During my Ph.D. studies, my colleagues and I investigated the phase transition from a homogenous BEC to a self-ordered super-radiant phase and we were studying how the system reacts on a quench from one steady state to another."

A time crystal is a unique and exotic phase of matter first predicted by the American physicist Frank Wilczek in 2012. Time crystals are temporal analogs of more conventional space crystals, as both are based on structures characterized by repeating patterns.

Instead of forming repetitive patterns across three-dimensional (3D) space, as space crystals do, time crystals are characterized by changes over time that occur in a set pattern. While some research teams have been able to realize these exotic phases of matter, so far, these realizations have only been achieved using closed systems. This raised the question of whether time crystals could also be realized in open systems, in the presence of dissipation and decoherence.