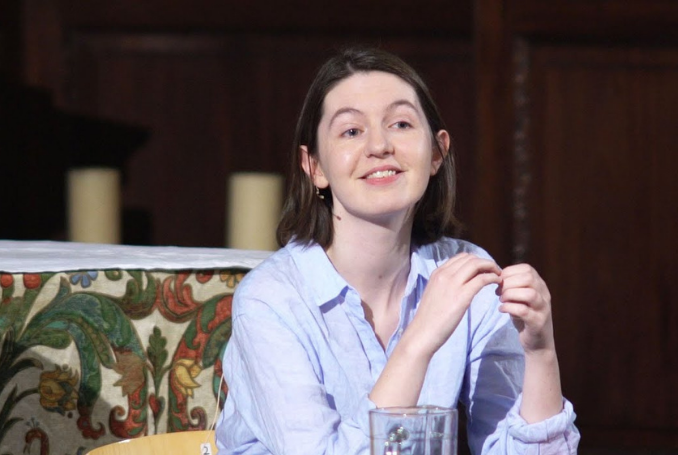 The pro-Israel crowd on social media was quick to pounce on award-winning Irish novelist, Sally Rooney, as soon as she declared that she had “chosen not to sell … translation rights of her best-selling novel, 'Beautiful World, Where Are You’ to an Israeli-based publishing house.”

Expectedly, the accusations centered on the standard smearing used by Israel and its supporters against anyone who dares criticize Israel and exhibits solidarity with the oppressed Palestinian people.

Rooney’s laudable action was not in the least "racist" or "antisemitic." On the contrary, it was taken as a show of support for the Palestine Boycott Divestment and Sanctions Movement (BDS), whose advocacy is situated within anti-colonial and anti-racist political discourses.

Rooney, herself, has made it clear that her decision not to publish with Modan Publishing House, which works closely with the Israeli government, is motivated by ethical values.

“I simply do not feel it would be right for me, under the present circumstances, to accept a new contract with an Israeli company that does not publicly distance itself from apartheid and support the U.N-stipulated rights of the Palestinian people,” she said, in a statement on Oct. 12.

In fact, Rooney’s contention is not with the language itself, as she stated that “the Hebrew-language translation rights to my new novel are still available, and if I can find a way to sell these rights that is compliant with the BDS movement’s institutional boycott guidelines, I will be very pleased and proud to do so.”

Rooney is not the first intellectual to take an ethical position against any form of cultural normalization with Israeli institutions, especially those that directly support and benefit from the Israeli military occupation of Palestine. Her position is consistent with similar stances taken by other intellectuals, musicians, artists, authors and scientists. The ever-expanding list includes Roger Waters, Alice Walker and the late Stephen Hawking.

The BDS movement has made it abundantly clear that, in the words of the movement’s co-founder, Omar Barghouti, “the Palestinian boycott targets institutions only, due to their entrenched complicity in planning, justifying, whitewashing or otherwise perpetuating Israel’s violations of international law and Palestinian rights.”

Of course, some are still not convinced. Those critics of the BDS movement intentionally conflate between antisemitism and a legitimate form of political expression, which aims at weakening and isolating the very economic, political and cultural infrastructures of racism and apartheid. The fact that numerous anti-Zionist Jews are supporters and advocates of the movement is not enough to make them reconsider their fallacious logic.

One of the "politest" denunciations of Rooney, appearing in the Jewish Forward magazine, was penned by Gitit Levy-Paz. The author’s logic is puzzling, to say the least. Levy-Paz said that Rooney, by refusing to allow her novel to be translated into Hebrew, has excluded “a group of readers because of their national identity.”

While the Jewish Forward writer is guilty of confusing political ethics and nationality, she is not the only one. Israeli Zionists do this as a matter of course, where the Zionist ideology and the Jewish religion -- and, in this case, language -- are quite often interchangeable. As a result, the definition of "antisemitism" has been stretched to include anti-Zionism - though Zionism is a modern ideological construct. Since Israel defines itself as a Jewish and Zionist state, it follows that any form of criticism of Israeli policies is often depicted as if a form of antisemitism.

One of the most interesting aspects of this conversation on language is that the Hebrew language has been used by the State of Israel since its establishment in 1948 as the language of oppression. In the minds of Palestinians, anywhere in Palestine, Hebrew is rarely the language used to communicate culture, literature, social coexistence and such. Instead, every military ordinance issued by the Israeli army, including closures and home demolitions, let alone the proceedings of military court hearings, and even the racist anti-Palestinian chants in football stadiums, are communicated in Hebrew. Palestinians are then excused if they do not view the modern Hebrew language as a language of inclusion, or even innocuous, everyday communication.

These realizations are not the outcome of daily experiences only. Successive Israeli governments have passed numerous legislations over the years to elevate Hebrew at the expense of Arabic. For over seven decades, the ethnic cleansing of the Palestinian people has been coupled with the erasure of their culture and their language, from the Hebraicization of historic Arabic names of towns, villages and streets, to the demolition of ancient Palestinian graveyards, olive groves, mosques and churches, the Israeli ethnocide is a top item on the Israeli political agenda.

The Israeli Nation State Law of 2018, which elevated Hebrew as Israel’s official language and downgraded Arabic to a “special status,” was the culmination of many years of a relentless, centralized Israeli campaign, whose sole purpose is to dominate the Palestinians, not only politically but culturally as well.

All that in mind, the hypocrisy of Israel’s mouthpieces is unmistakable. They welcome, or at least remain silent, when Israel tries to demolish and bury Palestinian culture and language, but cry foul when a respected author or a well-regarded artist tries, though symbolically, to show solidarity with the oppressed and occupied Palestinian people.

The Palestinian boycott movement is conscious of its morally driven mission, thus can never duplicate the tactics of the Israeli government and official institutions. BDS aims at pressuring Israel by reminding peoples all over the world of their moral responsibility towards the Palestinians.

BDS does not target Israelis as individuals and, under no circumstances, does it target Jewish individuals because they are Jews, or the Hebrew language, as such. Israel, on the other hand, continues to target Palestinians as a people, downgrades their language, dismantles their institutions and systematically destroys their culture. This is rightly referred to as cultural genocide, and it is our moral responsibility to stop it.