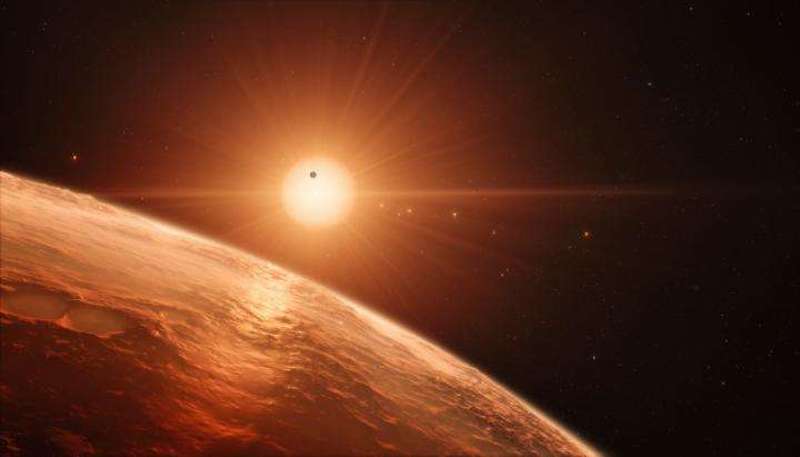 This artist's impression shows the view from the surface of one of the planets in the TRAPPIST-1 system. At least seven planets orbit this ultra cool dwarf star 40 light-years from Earth and they are all roughly the same size as the Earth. They are at the right distances from their star for liquid water to exist on the surfaces of several of them. Credit: ESO/M. Kornmesser

They were detected as they passed in front of their parent star, the dwarf star TRAPPIST-1. Three of them lie in the habitable zone and could harbour water, increasing the possibility that the system could play host to life. It has both the largest number of Earth-sized planets yet found and the largest number of worlds that could support liquid water.

Astronomers using the TRAPPIST-South telescope at ESO's La Silla Observatory, the Very Large Telescope (VLT) at Paranal and the NASA Spitzer Space Telescope, as well as other telescopes around the world, have now confirmed the existence of at least seven small planets orbiting the cool red dwarf star TRAPPIST-1. All the planets, labelled TRAPPIST-1b, c, d, e, f, g and h in order of increasing distance from their parent star, have sizes similar to Earth.

Dips in the star's light output caused by each of the seven planets passing in front of it (astronomy) -- events known as transits -- allowed the astronomers to infer information about their sizes, compositions and orbits. They found that at least the inner six planets are comparable in both size and temperature to the Earth.

Lead author Michaël Gillon of the STAR Institute at the University of Liège in Belgium is delighted by the findings: "This is an amazing planetary system -- not only because we have found so many planets, but because they are all surprisingly similar in size to the Earth!"