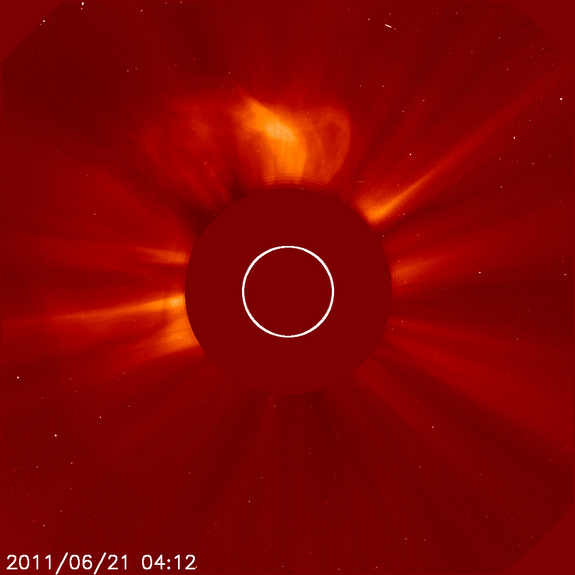 This image taken by the sun-watching SOHO observatory. CREDIT: SOHO/NASA/ESA

June 21, 2011 (SPACE.com) -- The sun unleashed a powerful solar flare and eruption Tuesday (June 21) just in time for the summer solstice: the first day of the summer in Earth's Northern Hemisphere.

The solstice solar storm occurred in the early hours of Tuesday and was spotted by the space-based Solar and Heliospheric Observatory (SOHO) operated by NASA and the European Space Agency, according to the website Spaceweather.com, which monitors space weather and skywatching events.

"Magnetic fields above sunspot complex 1236 erupted during the early hours of June 21st, hurling a coronal mass ejection (CME) almost directly toward Earth," Spaceweather.com stated in an alert. "The incoming CME does not appear to be particularly potent; nevertheless, the cloud could trigger polar geomagnetic storms when it reaches Earth on or about June 23rd."