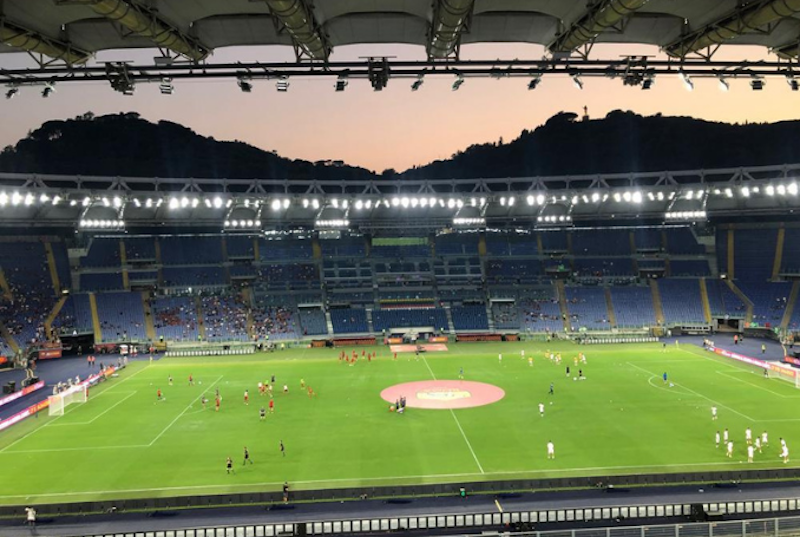 Friendly match between Roma and Raja Casablanca at Stadio Olimpico in Rome, on August 14, 2021. (Photo: Ramzy Baroud, The Palestine Chronicle)

Amid chaotic politics and anti-immigrant and refugee sentiments, Stadio Olimpico in Rome seemed like an oasis of social and cultural harmony. AS Roma and Raja Casablanca fans gathered in their thousands on a hot Saturday evening to cheer for their teams in a friendly match, the first in the Olimpico for nearly one year and a half.

The guest team is a Moroccan football powerhouse and an African champion par excellence. AS Roma, though it had a tough season last year, seemed ready to reclaim its past glory, especially with Jose Mourinho now leading the squad.

The match was Roma’s final ‘friendly’ before embarking on the difficult task of reclaiming their strong standing in Serie A. Relegated from both the UEFA Champions League and Europa League, Roma is forced to play in the less prestigious Conference League. Neither the team nor the fans, however, seemed shaken by the setback. To the contrary, the team’s Ultrà were, once again, back in the stadium, in their fixed spot in the Curva Sud, with their massive flags and melodious chant, “Roma Roma Roma…”

Raja Casablanca’s fans, although fewer in numbers, were still far more animated and, at times, rowdy. They danced in unison amid the occasional flares, fireworks and massive clouds of colored smoke.

As someone who has written and reported on issues pertaining to human rights, socio-economic inequalities and political discord in Europe, the Middle East and elsewhere, the spectacle was atypical. Italians, Moroccans and other Arabs seamlessly mingled as friends, or friendly rivals.

Muslim women, some in their traditional attires and headcovers, others without, some speaking Italian, others Arabic or French, were at home, free from judgments, harassment and unfriendly looks.

The children, however, took the center stage. A 10-year-old Roma fan, sitting alongside his father while wrapped in a Roma flag, bellowed screams of joy and anger, and quite often specific instructions at Roma players, who, starting in the middle of the first half, dominated the game.

Two Italian-Moroccan boys wore green and white jerseys with this Arabic inscription at the back: “Rajawi Falastini”, Palestinian Rajawi, the typical homage to Palestine and her people, often exhibited by Raja Casablanca and its loyal fans. The two children remained hopeful that their team could still stage a comeback despite the fact that Roma’s victory was almost assured well before the end of the game. The two boys chatted in Italian, spoke to their parents with a distinct Moroccan accent and yelled at the players to play better or move faster in French.

In fact, the intermingling of languages was omnipresent throughout the entire event. Raja’s Ultras chanted in several languages, including Italian, and held large banners, communicating messages of political nature, written mostly in French.

Most amusing, especially for those of us sitting in the Tribuna Tevere -- at an equal distance between both ultras -- was the shouting match, through songs, chants, and occasionally whistles between the two sides.

For me, personally, the game, although "friendly," was one of the most difficult matches to watch. A loyal Roma fan for years, my heart was also with the Moroccan side. At times, it seemed that I was cheering for both teams and regretting missed opportunities on both sides. While it was clear that Roma was easily winning the match, I desperately hoped for a Moroccan goal or two.

By the end of the match, as the large crowd -- still giddy by the fact that they were able to attend a large sports event despite the deadly COVID-19 pandemic -- dispersed, I walked around the Foro Italico, the sports complex which hosts Stadio Olimpico, among other edifices. The contradictions were palpable.

This towering sports monument was once called Foro Mussolini, one of the starkest celebrations of fascist Italy in the twentieth century. Fascists, then, under the leadership of Benito Mussolini, labored to harness the popular appeal of sports as to communicate a message, that fascism exists to celebrate the power and vigor of the Italian race, one that is, supposedly, superior to all others.

Although the complex’s name eventually changed, much of the inscriptions, dating back to the Fascist era, are still in place. The most obvious of these references is the Mussolini Dux, a 50-feet obelisk that still towers near the entrance.

Fascism, which is rearing its ugly head once more in various European societies, cared little for social justice, for racial equality, and for cultural harmony. Yet, this very stadium, one of the greatest architectural achievements of Italy’s Mussolini, is now a place for various peoples, cultures and languages to intermix. Several Muslim women, donned with beautifully colored hijabs, sought respite from the heat and humidity under Mussolini’s Dux obelisk, possibly unaware of the irony.

News outside the stadium, that day, told of horrific stories from Greece and Belarus regarding the mistreatment of refugees and the targeting of migrants. Muslim European communities are constant subjects for political "controversies," for merely living their lives and practicing their religions, or covering their heads. But for approximately two hours, in Stadio Olimpico, on Saturday, Aug. 14, none of that seemed to matter. The world outside may bring the worst in us, but for now, we are only defined by our love for football, and hopefully, someday, for each other.