Some of what I gave up to occupy the “activist” life | Mickey Z. 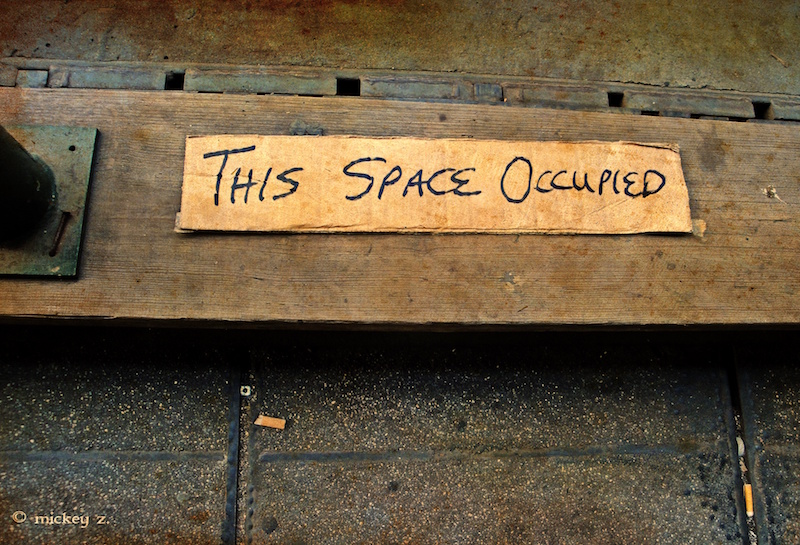 Roughly four years ago, while fully embedded within the Occupy Wall Street (OWS) hive mind, I wrote article after article urging others to “join us.”

In one such article, I declared that OWS not only gave “my perception a much-needed adjustment,” but also helped me “realize that if you talk to the universe, sometimes it talks back.” More from that embarrassing essay:

In October 2011, OWS encouraged everyone to pull their money from the big banks. I had an account with a small local bank… but also had a Chase credit card. When I went to my local bank to inquire about getting a credit card from them instead, I was informed that if I signed up that particular day, I'd get a free gift.

"A blanket," came the reply.

"I'll be back in an hour," I promised -- barely able to contain my joy.

I went home, took care of a few things, and prepared for what had become one of my 3-4 times per week visits to Liberty Square during the initial encampment. This time, however, I stopped at my bank, filled out the forms, and was handed a brand new blanket.

Smiling all the way from Astoria to Wall Street, I carried my gift directly down to the OWS Comfort Station and donated it.

Where do I begin?

Let’s be clear: Switching credit cards did absolutely nothing to challenge capitalism in general or the big banks in particular. But then again, neither did OWS. So there’s that. But here’s a question I never hear asked: How do such meaningless acts add up to impact “activists” on a personal level? Perhaps my own story will shine some light on such self-sabotage.

That Chase credit card I so willingly discarded had a much lower interest rate than the “small bank” card I ended up with. It also gave rewards points which translated directly in cash. When my already-shaky finances took a hit a year or two later, I had to use my credit card far more often than I wanted. Result: way more finance charges, no reward cash, and ongoing debt. I’m not blaming all this on an OWS stunt but my empty gesture sure helped make things much worse.

My finances have yet to recover, but then again it’s not as if I ever did the right thing for myself in terms of income. You see, it’s considered “selling out” for a “rebel” like me to make too much money or even want to make too much money. Your “radical” cohorts will look at you askance if you talk too much about things like health insurance -- never mind retirement funds.

I now see it as one of the most effective capitalist propaganda efforts of all time: Convincing “activists” to take a virtual vow of poverty to prove how “hardcore” they are. How genius is it to make the (alleged) enemies of capitalism actually feel morally obligated to voluntarily surrender resources? While radical “purists” prove their (alleged) commitment to their (alleged) cause by guaranteeing they never come close to advancing it, the dominant system churns on unscathed -- not even aware we’re alive.

Who’s the “woke” one, comrades?

I could go on and on about how being an “activist” heightened my under-earner tendencies and caused much pain and discomfort in my life -- but I’ll save that for the book I’m writing. For now, I’ll touch on a few other examples of how the never ending chase for radical perfection is a counterproductive sham and left me soothing (and deluding) myself with a preening sense of “mission.”

I’m sure other “activists” -- if they chose to be introspective and forthcoming -- could add dozens more examples of self-sabotaging behavior in the name of virtue signaling like, I dunno… symbolic arrests and/or pretending to be homeless? But perhaps you’re wondering why I even bother writing articles like this, articles that seem to result in nothing more than boatloads of contempt rained down upon me. I do so, because I need to personally come clean and move on. But there’s a much bigger picture to consider:

What we call “activism” does less-than-nothing to create social change but it does plenty to instill in its drone-like adherents a never-ending and self-defeating drive for an exhibitionist form of competitive purity. If we’d only take an honest look around, we’d recognize how badly we’ve failed on a macro and micro level.

Each and every minute of every day, individual humans hit critical mass. For innumerable reasons, they reach the point of no return, accept that they've been lied to since forever, and decide they want to work to help create change. They become "activists."

However, there is a very dogmatic and counterproductive template for so-called "activism" in the United States and this ongoing wave of new energy is quickly gobbled up by existing "groups" and funneled into the same old paradigm. Variations exist but the hive mind reigns supreme.

Imagine what might be accomplished if "radical" veterans accepted that we've failed miserably and instead: a) begged the next generation of "activists" (whatever their age) for forgiveness and b) listened to and heeded their ideas?

How many times must we tragically fail before our egos allow us to realize it? We are on the cusp of social, economic, and environmental collapse. This may be our last chance to accept our complicity and rapidly shift to experimenting with new approaches…

As Dylan once warbled, “I’ve had enough/What else can you show me?”

Postscript: To be blunt, I expect very little by way of reaction or feedback to this article except perhaps derailing commentary about fluoride. Or maybe some variation of the “no true Scotsman” logical fallacy, e.g. “Just because you went overboard doesn’t mean all activists do.” Please prove me wrong…

Mickey Z. is currently writing his fourteenth book, How to Lose Friends & Influence Nobody: My Life as an “Activist.” In the meantime, he can be found here.

Some of what I gave up to occupy the “activist” life by Mickey Z. is licensed under a Creative Commons Attribution-ShareAlike 4.0 International License.
Based on a work at https://worldnewstrust.com/some-of-what-i-gave-up-to-occupy-the-activist-life-mickey-z.