Should your kids get the Covid jab? — Mickey Z 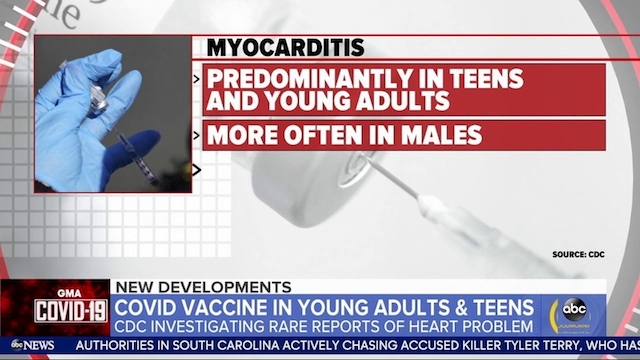 Aiden Jo is a 14-year-old high school freshman in Georgia. In June 2021, he got the second of his two Pfizer jabs and it landed him in the hospital with myocarditis. Aiden’s mother, Emily, recently told her story to The Defender. She was aware that the Centers for Disease Control and Prevention (CDC) listed heart inflammation as a possible side effect — especially for teenage boys — but took comfort in the CDC promising it would be “very rare and mild.” She stated, “What they didn’t explain is that ‘mild’ means hospital care and follow-up care indefinitely.” Here’s how The Defender describes what happened next:

Jo took her son to an emergency room in Atlanta, where the CDC has its headquarters. The ER doctor first asked whether Aiden had his vaccine, then tested his troponin level to see if his heart muscle had been damaged. Doctors also ran an EKG. After both tests came back as abnormal, Aiden was admitted to the acute cardiac unit. The first night Aiden stayed in the hospital his troponin number quadrupled overnight. Aiden’s mother said the cardiologist reported it to the CDC’s Vaccine Adverse Events Reporting System (VAERS I.D. 1396660) and was in contact with the CDC multiple times during his four-day hospital stay. “They determined that yes, he met the criteria of having post-vaccine myocarditis,” Emily Jo said.

According to a 2010 study in Progress in Cardiovascular Diseases: “Myocarditis presents with a spectrum of symptoms ranging from mild dyspnea or chest pain that spontaneously resolves without treatment to cardiogenic shock and sudden death. The major long-term consequence is dilated cardiomyopathy (DCM) with chronic heart failure.” The Myocarditis Foundation adds: “Overall, myocarditis which can cause dilated cardiomyopathy, are thought to account for up to 45 percent of heart transplants in the U.S. today.” So much for “mild.” 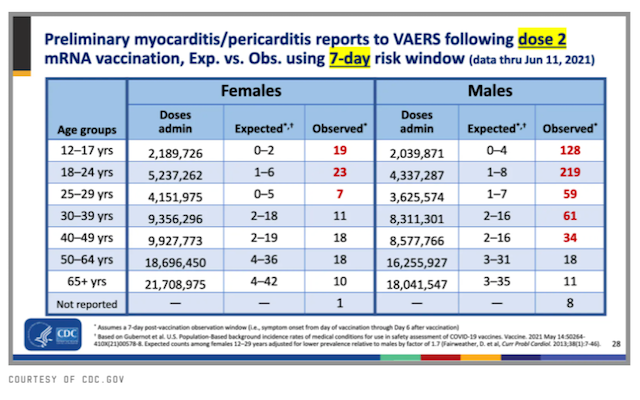 A pre-print study in the British Medical Journal found: “The risk of 12-15-year-old healthy boys experiencing cardiac adverse events such as myocarditis after their second dose of the Pfizer and BioNTech vaccine is around four times adolescents’ risk of being admitted to hospital as a result of infection with SARS-CoV-2.”

However, Big Pharma is pushing back — criticizing the study “for mining data from an inappropriate source to deliver an anti-vaccine message.” What is this “inappropriate source” they speak of? The same Vaccine Adverse Events Reporting System (VAERS) cited above. The same VAERS cited by the CDC itself in this screenshot: 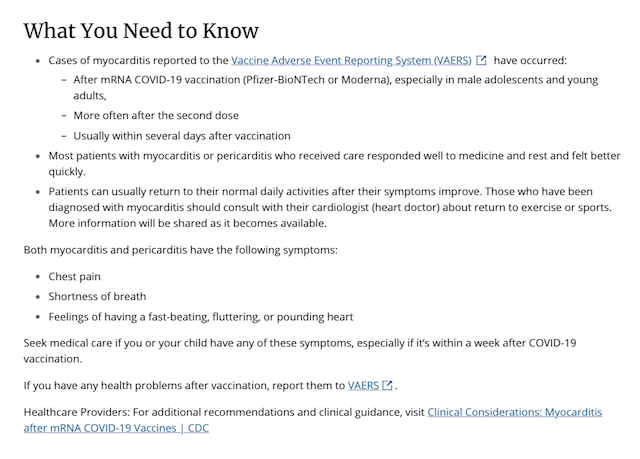 Reminder: VAERS is the primary government mechanism for documenting adverse vaccine reactions in the U.S. These are  “only” reports, of course, but consider this: The actual number of adverse events is most likely quite significantly higher because VAERS is a passive surveillance system that relies on the willingness of individuals and professionals to submit reports voluntarily. Currently, very few medical professionals are brave enough to report Covid vaccine side effects for fear of their reputation and possibly, their jobs.

It’s fascinating how most people I know — probably even YOU — trust the news (sic) when they lie about stuff like a “pandemic of the unvaccinated” or they call ivermectin a horse de-wormer and claim legions of people are overdosing on it. Yet with VAERS, you suddenly become hardcore skeptics — even when the numbers are hiding in plain sight and are pointing toward an avalanche of “vaccine” side effects and deaths. When you do this, I wonder, have you ever noticed that you’re parroting exactly what the mainstream narrative says? Would you like to explain such behavior to someone like Emily Jo? 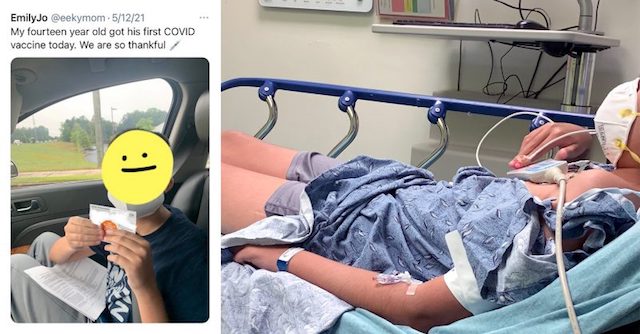 “He can’t do any physical activity, no recess, no PE, he has to have more time to go between classes until he has a cardiopulmonary stress test that shows his heart can handle the stress,” Emily said about her boy, Aiden. “We have incurred thousands and thousands of dollars in medical bills. We have insurance but they don’t pay all. It does not account for tests down the road that we still have to get. I don’t feel I should have to pay for doing what I was told to do by the government. Hey, ‘we are all in this together’ and then you get a vaccine injury and you’re just completely ignored.”

What will it take for you to begin questioning and challenging the narrative?