As of this week, the shale oil miracle launched U.S. oil production above the 1970 previous-all-time record at just over 10 million barrels a day.

Techno-rapturists are celebrating what seems to be a blindingly bright new golden age of energy greatness. Independent oil analyst Art Berman, who made the podcast rounds the last two weeks, put it in more reality-accessible terms: “Shale is a retirement party for the oil industry.”

It was an impressive stunt and it had everything to do with the reality-optional world of bizarro finance that emerged from the wreckage of the 2008 Great Financial Crisis. In fact, a look the chart below shows how exactly the rise of shale oil production took off after that milestone year of the long emergency. Around that time, U.S. oil production had sunk below 5 million barrels a day, and since we were burning through around 20 million barrels a day, the rest had to be imported. 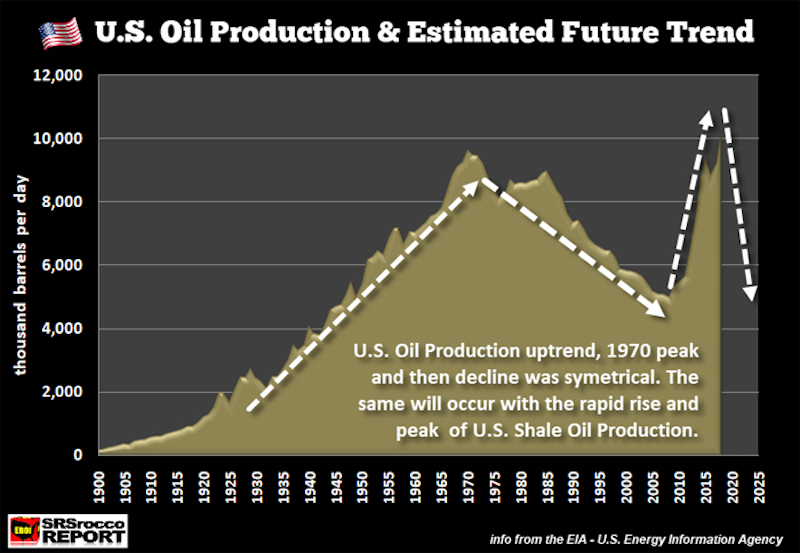 Chart by Steve St. Angelo at www.srsroccoreport.comIn June of 2008, U.S. crude hit $144-a-barrel, a figure so harsh that it crippled economic activity -- since just about everything we do depends on oil for making, enabling, and transporting stuff. The price and supply of oil became so problematic after the year 2000 that the United States had to desperately engineer a workaround to keep this hyper-complex society operating. The “solution” was debt. If you can’t afford to run your society, then try borrowing from the future to keep your mojo working.

The discovery of new oil had been heading down remorselessly for decades, to the point that the world was fatally short of replacing the oil it used every year with new supply. The last significant big fields -- Alaska, the North Sea, and Siberia -- had been discovered in the 1960s and we knew for sure that the first two were well past their peaks in the early 2000s. By 2005, most of the theoretically producible new oil was in places that were difficult and ultra-expensive to drill in: deep water, for instance, where you need a giant platform costing hundreds of millions of dollars, not to mention armies of highly skilled (highly paid) technicians, plus helicopters to service the rigs. The financial risk (for instance, of drilling a “dry hole”) was matched by the environmental risk of a blowout, which is exactly what happened to BP’s 2010 Deepwater Horizon platform in the Gulf of Mexico, with clean-up costs estimated at $61 billion.

Technology -- that El Dorado of the Mind -- rode to the rescue with horizontal drilling and fracturing of ”tight” oil-bearing shale rock. It was tight because of low permeability, meaning the oil didn’t flow through it the way it flowed through normal oil-bearing rocks like sandstone. You had to sink a pipe down, angle it horizontally into a strata of shale only a few meters thick, and then blast it apart with water under pressure and particles of sand or ceramic, called propants, the job of which was to hold open those fractures so the oil could be sucked out. Well, it worked. The only problem was you couldn’t make any money doing it.

The shale oil companies could get plenty of cash-flow going, but it all went to servicing their bonds or other “innovative” financing schemes, and for many of the companies the cash flow wasn’t even covering those costs. It cost at least 6 million dollars for each shale well, and it was in the nature of shale oil that the wells depleted so quickly that after Year Three they were pretty much done. But it was something to do, at least, if you were an oil company -- an alternative to 1) doing no business at all, or 2) getting into some other line-of-work, like making yoga pants or gluten-free cupcakes.

The two original big shale plays, the Bakken in North Dakota and the Eagle Ford in south Texas, have now apparently peaked and the baton has passed to the Permian Basin in west Texas. If the first two bonanzas were characteristic of shale, we can look forward not very far into the future when the Permian also craps out. There are only so many “sweet spots” in these plays.

The unfortunate part of the story is that the shale oil miracle only made this country more delusional at a moment in history when we really can’t afford to believe in fairy tales. The financial world is just now entering a long overdue crack-up due to the accumulating unreality induced by Federal Reserve interventions and machinations in markets. As it continues to get unglued -- with rising interest rates especially --  we will begin to see the collapse of the bonding and financing arrangements that the fundamentally unprofitable shale “miracle” has been based on. And then you will see the end of the shale “miracle.” It is likely to happen very quickly. It was fun while it lasted. Now comes the hard part: getting through this without the nation completely losing its marbles and doing something stupid and desperate -- like starting another merry little war.