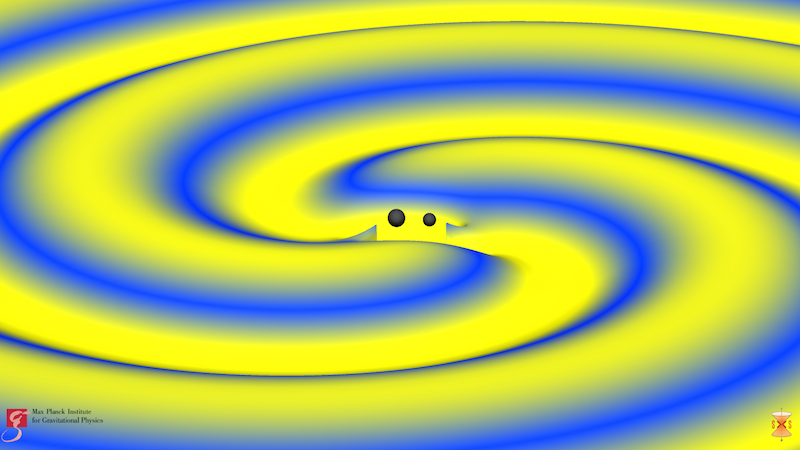 This image shows a numerical simulation of a binary black hole merger with masses and spins consistent with the third and most recent LIGO observation, named GW170104. The strength of the gravitational wave is indicated by elevation as well as color, with blue indicating weak fields and yellow indicating strong fields. The sizes of the black holes are doubled to improve visibility. Credit: Image Credit: Numerical-relativistic Simulation: S. Ossokine, A. Buonanno (Max Planck Institute for Gravitational Physics) and the Simulating eXtreme Spacetime project Scientific Visualization: T. Dietrich (Max Planck Institute for Gravitational Physics), R. Haas (NCSA)

June 1, 2017 (Phys.org) -- The Laser Interferometer Gravitational-wave Observatory (LIGO) has made a third detection of gravitational waves, ripples in space and time, demonstrating that a new window in astronomy has been firmly opened. As was the case with the first two detections, the waves were generated when two black holes collided to form a larger black hole.

The newfound black hole, formed by the merger, has a mass about 49 times that of our sun. This fills in a gap between the masses of the two merged black holes detected previously by LIGO, with solar masses of 62 (first detection) and 21 (second detection).

"We have further confirmation of the existence of stellar-mass black holes that are larger than 20 solar masses—these are objects we didn't know existed before LIGO detected them," says MIT's David Shoemaker, the newly elected spokesperson for the LIGO Scientific Collaboration (LSC), a body of more than 1,000 international scientists who perform LIGO research together with the European-based Virgo Collaboration. "It is remarkable that humans can put together a story, and test it, for such strange and extreme events that took place billions of years ago and billions of light-years distant from us. The entire LIGO and Virgo scientific collaborations worked to put all these pieces together."

The new detection occurred during LIGO's current observing run, which began November 30, 2016, and will continue through the summer. LIGO is an international collaboration with members around the globe. Its observations are carried out by twin detectors—one in Hanford, Washington, and the other in Livingston, Louisiana—operated by Caltech and MIT with funding from the National Science Foundation (NSF).