Aug. 28, 2006 -- George W. Bush was in Minnesota Tues., Aug. 22, fundraising for a Republican candidate for the 6th Congressional seat. Roger Cuthbertson, a Minneapolis member of Veterans for Peace and protest organizer, rented a 10-foot pontoon boat for the event and was joined by others in pontoons, sail boats, and bass boats. Knowing roads leading to the lake would be blocked, Cuthbertson said a boat protest "just makes sense."

The fundraiser was held at a $12.5 million home on Lake Minnetonka in the tony town of Wayzata, which is 40 miles away from candidate Michele Bachmann's home district.

It was a peaceful protest and there were no arrests.

On June 26, Cuthbertson and VFP colleague Robert Heberle were cited for being a public nuisance when they launched rafts from their pontoon boat and tried to paddle to the shore of Lake Minnetonka to speak to Dick Cheney who was headlining a fundraiser for Bachman. The men were stopped by a sheriff's boat, taken to a police station and released.

Residents of tiny Wayzata, population 4,113, have already donated $1.2 million to the 2006 races, a quarter million more than the 373,000 residents of  the City of Minneapolis, according to opensecrets.org, which tracks contributions by zipcode once they are filed with the Federal Election Commission. 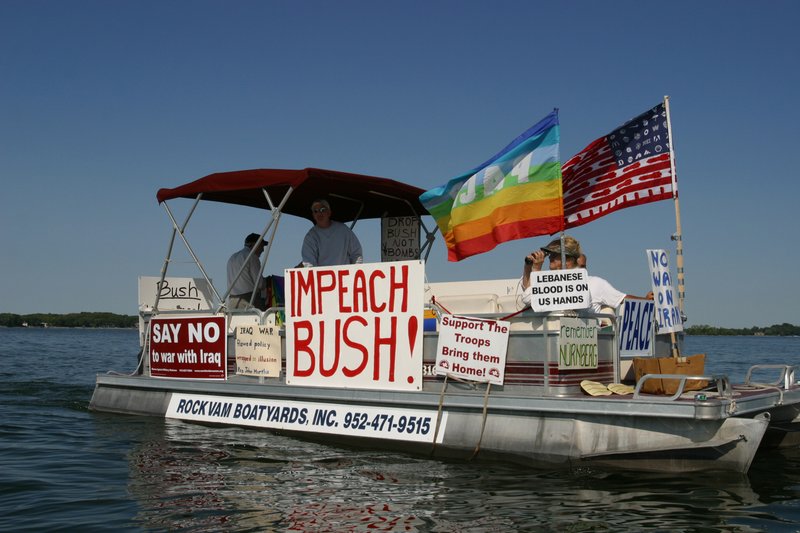