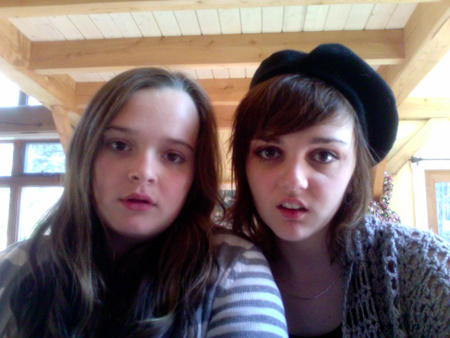 Yes, girls, I know that I am so lame, but you asked me when I would blog about you!

Feb. 18, 2012 (ShapeShiftas) -- I have two beautiful, brilliant, fantastic daughters who are, thankfully, remarkably confident and happy teenagers (well, pre-teen in the younger daughter's case, not that you'd know it).

We moved to Vermont from New York for the girls' benefits, or so we said, but it's turned out that the best benefit of all is mine -- I get to spend lots more time with them than when I was a big career-woman back in New York. I am always amazed that they know so much more than I did at their age, in part because they are so comfortable on the computer and are fearless Googlers, also in part because they are Millenial girls who've only read about the women's movement and are at least two generations "liberated."

The world is their oyster, and mostly I try to guide them along but keep out of their way. They keep me up-to-date and on my toes, which is in their opinion a hopeless cause, and we do have many laughs, usually about "how old are you, Mom, really you never heard of that? You don't know what ROFLOL means??" "Of course I do," I reply. "I invented ROFLOL!"

So they got my husband a Green Screen for Christmas, which I promptly commandeered and have been trying to learn how to use. The Green Screen turned out to be a queen-size sheet, dyed in the requisite kelly green (see HTML color #00ff00). A Green Screen is used in photography and film as a backdrop that can be very easily cropped out and replaced with something else. Everyone is familiar with the use of Green Screens from watching the weather on the news, or the TV show Tosh.O.

The weather lady is standing in front of one as she moves her hands around showing where the front is moving and the winds are swirling on a map that is spliced in. I've always wondered how she knows where to point. (Editor's note to Deborah: You'll notice that they're looking at a monitor off stage-left or -right as they move their hands around and point). 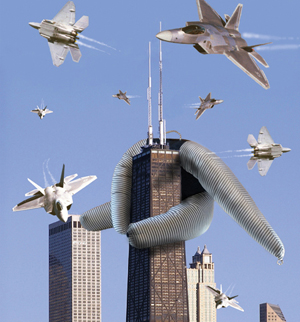 I used this shot of Big Daddy and the Hancock Tower for a handout when I did the Beckman's Show in Chicago. For some reason, I keep getting e-mails from a rep I met there, addressed to Fay Wray.

I wanted to splice in different backdrops for my product shots, and also be able to cut out the pillows and Photoshop them into other pictures, which I for one find hilarious. I've been having my friend and artist Greg Crawford do this work for me up until now, but the Green Screen is supposed to make it so easy. And I have the whole Adobe Suite, featuring Photoshop and Illustrator, which I got for the educator's rate when I was teaching a class at the Fashion Institute of Technology (FIT) in New York. I have a pretty good camera (Editor's note: commandeered from her husband) which I have finally learned to use on settings besides ♥, and I took several semesters of (obsolete film) photography in college, and so I said -- say it with me, friends -- "How Hard Could It Be?"

You know, for once, it really isn't all that hard, although I doubt that I will ever be able to do the work that Greg did in the Hancock Tower image to the left. Yet I am finally beginning to think that I could learn to use these programs. I have been meaning to learn Photoshop and Illustrator for years now; took a few seminars, bought some books, and have made countless tries, only to get frustrated, discouraged, and disgusted. "I can't learn how to draw on the computer!" I'd lament. "I just don't think that way!" Meanwhile I scraped by at work in the Garment Center by scanning sketches into the computer and handing them off to a Millenial Generation technical designer, who would whip out perfectly rendered spec sheets to e-mail to our factories in the time it would take me to find my croquis.

My girls could not believe that learning to work with the Green Screen was such a project for me. "Mom, it's so easy, how can you not know this?" Of course they could use Gimp by the time they were about three-years-old and had their first computer, one of those beautiful iMacs, in blue.

They have never not had a computer, can't imagine what that would be like, and can't understand how it can be difficult for some parents and grandparents to use computers. They just naturally think like a computer, while it's still foreign to me. What a huge cultural transformation in just one generation.

We bought this iMac when my younger daughter was born. She just turned 12. The computer -- long out of service now -- is an antique.