June 7, 2012 (ShapeShiftas) -- If you could indulge in just one rich-people's perk, a luxury without cost or bad karma, what would it be?

I spend an inordinate amount of time driving here in Vermont, shoulders tense, hands clenched, teeth gritted, eyes slightly squinted behind sunglasses, even when it's not sunny out. I have myself and two non-driving daughters to get to our various activities, and everything is at least 45 minutes away. And to think I didn't even own a car 5 years ago! 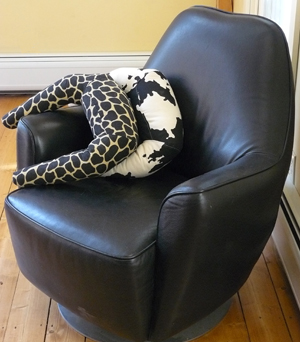 These Guest pillows can help you get comfy in the car - as long as you're not the one doing the driving.

Like most of us, I couldn't wait to get my license back in the day. Nobody walks anywhere in the suburbs of Ohio, at least to get places; there are some nice "nature trails" that you have to drive to get to, and people go walking around in the malls before they open, for exercise.

I had a bike (actually several, because they kept getting stolen) that I would ride, helmetless, on the main thoroughfair through town, to my friends' and family's houses and to my first job at Burger King; this was considered highly dorky, especially when wearing my snappy, brown-and-gold work uniform. I was the youngest one in my high school class (still am, but happy about it now) and didn't get my license until I was a senior, when I made up for lost time, driving everywhere and anywhere I could.

A few years later, in, ironically, Detroit, I began to realize that I didn't like driving all that much. The "Motor City" is where I first used the phrase, "Wherever you are is 45 minutes from where you want to be," and where I started to get sick of driving. There is no such thing as public transportation in Detroit, unless you count the monorail that linked the mall where I worked to the hotel across the vast parking lot. Oh, I suppose there were buses downtown, but I never took or saw one.

What I thought of as "Detroit" was really rings of concentric, sprawling suburbs around the mostly deserted downtown, and you'd drive the encircling freeways to get everywhere. I think we only built cities like this in the USA, back when we had endless space, huge land yachts for cars, and no worries about Peak Oil and global warming. 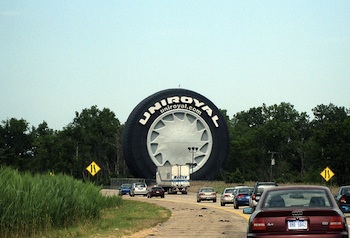 This Giant Tire is a beloved sight on the road into Detroit from the airport. It was originally a Ferris wheel at the 1964 World's Fair.

Do you think Claes Oldenburg ever drove by? 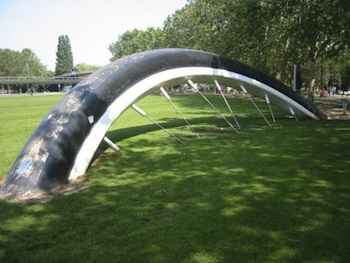 Part of Claes Oldenburg and Coosje van Bruggen's sculpture Buried Bicycle, in Paris. So THIS is where my stolen bike went!!! 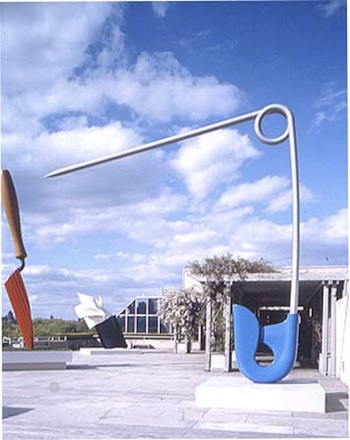 You don't need a car to see the Claes Oldenburgs in NYC, here in 2002 in the Metropolitan Sculpture Garden.

Most all of our cities are like Detroit -- it takes 45 minutes (1 hour, 2 hours!) by car to get from where you are to where you want to go. Chicago, LA, Atlanta, Houston -- all cities where I have spent time drivin', drivin', drivin'. Most if not all of these cities have public transportation, but few of us take it, usually only the ever-increasing numbers of us who can't afford a car, or those who've had their license revoked.

Alas, only a few U.S. cities, like New York, Boston, and San Francisco, have enough public transportation so that you can get by easily without a car. And in the rural areas, forget it. Not only do you have to rely on a car, but after a while, you (almost) think nothing of driving 50 miles each way to get to dance class or to go out for dinner.

Living carless however is great! I loved the day I sold my car and moved to New York. No more car repairs, no insurance, no car salesmen, no snow tires, no high gas prices, and best of all, no stress and time wasted behind the wheel. I love to take the bus, the subway, the train -- you can read, drink, talk to other people, and nap.

Even better is hailing a cab, or perhaps the ultimate luxury, taking a car service. My first Garment Center boss had a car and driver on staff, and I fantasize about having that for myself to this day. I would relax with a couple of Guests travelling pillows, read the Times, balance the books, knit, and definitely, nap!