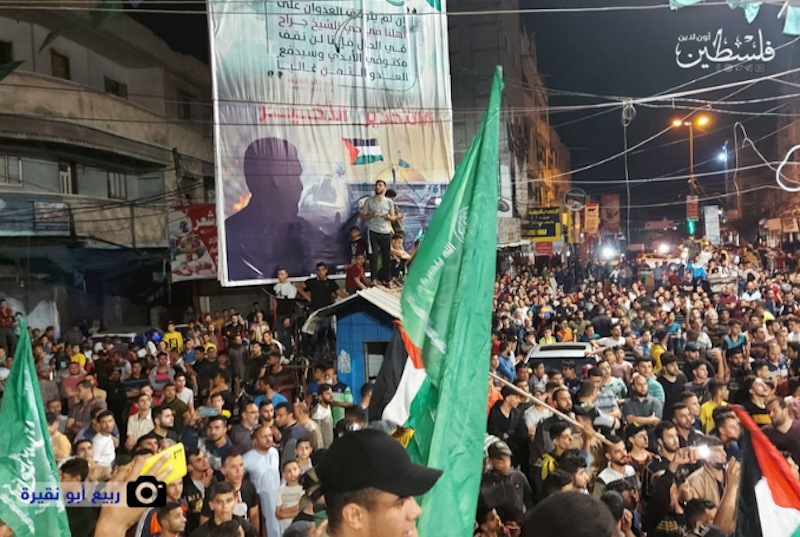 Gazans take to the streets across the besieged enclave to celebrate the ceasefire. (Photo: Supplied by source)

The "Palestinian Revolt of 2021" will go down in history as one of the most influential events that irreversibly shaped collective thinking in and around Palestine.

Only two other events can be compared with what has just transpired in Palestine: the revolt of 1936 and the First Intifada of 1987.

The general strike and rebellion of 1936-39 were momentous because they represented the first unmistakable expression of collective Palestinian political agency. Despite their isolation and humble tools of resistance, the Palestinian people rose across Palestine to challenge British and Zionist colonialism, combined.

The Intifada of 1987 was also historic. It was the unprecedented sustainable collective action that unified the occupied West Bank and Gaza after the Israeli occupation of what remained of historic Palestine in 1967. That legendary popular revolt, though costly in blood and sacrifices, allowed Palestinians to regain the political initiative and to, once more, speak as one people.

That Intifada was eventually thwarted after the signing of the Oslo accords in 1993. For Israel, Oslo was a gift from the Palestinian leadership that allowed it to suppress the Intifada and use the then newly invented Palestinian Authority (PA) to serve as a buffer between the Israeli military and occupied, oppressed Palestinians.

Since those years, the history of Palestine has taken on a dismal trajectory, one of disunity, factionalism, political rivalry and, for the privileged few, massive wealth. Nearly four decades have been wasted on a self-defeating political discourse centered on American-Israeli priorities, mostly concerned with "Israeli security" and "Palestinian terrorism."

Old but befitting terminologies such as ‘liberation’, ‘resistance’ and ‘popular struggle." were replaced with more "pragmatic" language of "peace process," "negotiation table" and "shuttle diplomacy." The Israeli occupation of Palestine, according to this misleading discourse, was depicted as a "conflict" and "dispute," as if basic human rights were the subject of political interpretation.

Predictably, the already powerful Israel became more emboldened, tripling the number of its illegal colonies in the West Bank along with the population of its illegal settlers. Palestine was segmented into tiny, isolated South-African-styled Bantustans, each carrying a code -- Areas, A, B, C -- and the movement of Palestinians within their own homeland became conditioned on obtaining various colored permits from the Israeli military. Women giving birth at military checkpoints in the West Bank, cancer patients dying in Gaza while waiting for permission to cross to hospitals, and more, became the everyday reality of Palestine and the Palestinians.

With time, the Israeli occupation of Palestine became a marginal issue on the agenda of international diplomacy. Meanwhile, Israel cemented its relationship with numerous countries around the world, including countries in the Southern hemisphere that have historically stood beside Palestine.

Even the international solidarity movement for Palestinian rights became confused and fragmented, itself a direct expression of Palestinian confusion and fragmentation. In the absence of a unified Palestinian voice amid Palestine’s prolonged political feud, many took the liberty of lecturing Palestinians on how to resist, what ‘solutions’ to fight for and how to conduct themselves politically.

It seemed that Israel had finally gained the upper hand and, this time, for good.

Desperate to see Palestinians rise again, many called for a third Intifada. Indeed, for many years, intellectuals and political leaders called for a third Palestinian Intifada, as if the flow of history, in Palestine -- or elsewhere -- adheres to fixed academic notions or is compelled by the urging of some individual or organization.

The rational answer was, and remains, that only the Palestinian people will determine the nature, scope and direction of their collective action. Popular revolts are not the outcome of wishful thinking but of circumstances, the tipping point of which can only be decided by the people themselves.

May 2021 was that very tipping point. Palestinians rose in unison from Jerusalem to Gaza, to every inch of occupied Palestine, including Palestinian refugee communities throughout the Middle East and, by doing so, they also resolved an impossible political equation. The Palestinian ‘problem’ was no longer that of the Israeli occupation of the West Bank, Gaza and East Jerusalem alone, but also of Israeli racism and apartheid which have targeted the Palestinian communities inside Israel. Further, it was also the crisis of leadership and the deep-seated factionalism and political corruption.

When Israeli Prime Minister, Benjamin Netanyahu, decided on May 8 to unleash the hordes of police and Jewish extremists on Palestinian worshippers at Al-Aqsa Mosque, who were protesting the ethnic cleansing of the Sheikh Jarrah neighborhood in East Jerusalem, he was merely attempting to score a few political points among Israel’s most chauvinist right-wing constituencies. He also wanted to remain in power or, at least, to avoid prison as a result of his corruption trial.

He did not anticipate, however, that he was unleashing one of the most historic events in Palestine, one that would ultimately resolve a seemingly impossible Palestinian quandary. True, Netanyahu’s war on Gaza killed hundreds and wounded thousands. The violence he perpetrated in the West Bank and in Arab neighborhoods in Israel killed scores. But, on May 20, it was the Palestinians who claimed victory, as hundreds of thousands of people rushed to the streets to declare their triumph as one unified, proud nation.

Winning and losing wars of national liberation cannot be measured by gruesome comparisons between the number of dead or the degree of destruction inflicted on each side. If this was the case, no colonized nation would have ever won its freedom.

Palestinians won because, once more, they emerged from the rubble of Israeli bombs as a whole, a nation so determined to win its freedom at any cost. This realization was symbolized in the many scenes of Palestinian crowds celebrating while waving the banners of all Palestinian factions, without prejudice and without exception.

Finally, it can unequivocally be asserted that the Palestinian resistance scored a major victory, arguably unprecedented in its proud history. This is the first time that Israel is forced to accept that the rules of the game have changed, likely forever. It is no longer the only party that determines political outcomes in occupied Palestine, because the Palestinian people are finally a force to be reckoned with.

--Ramzy Baroud is a journalist and the Editor of The Palestine Chronicle. He is the author of five books. His latest is “These Chains Will Be Broken: Palestinian Stories of Struggle and Defiance in Israeli Prisons” (Clarity Press). Dr. Baroud is a Non-resident Senior Research Fellow at the Center for Islam and Global Affairs (CIGA) and also at the Afro-Middle East Center (AMEC). His website is www.ramzybaroud.net