One of Them Life-Flashing-Before-Your-Eyes Moments — Mickey Z. 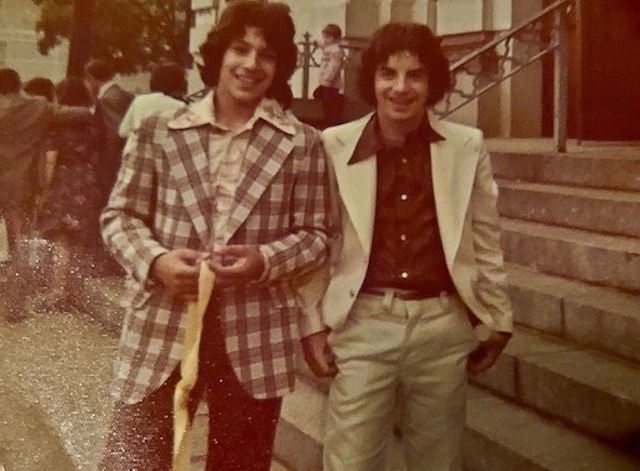 Every now and then, if you’re the kind of person who pays close attention, the universe will deliver one of them life-flashing-before-your-eyes moments. I’ve had plenty and I’m here now to tell you about one in particular. It was spring 2003. After training my early-morning clients on Manhattan’s Upper East Side, I rode the N train under the East River back to the friendly confines of Astoria. I raised my eyes from whatever book I was reading to smile when the train rumbled out into the sunlight. We made it through a 100-year-old water tunnel yet again. Hallelujah!

That day, I got off the train two stops early: 36th Avenue, my old stomping grounds. No specific reason — or so I thought. Upon walking downstairs from the elevated station, I noticed Joe’s Pizzeria had fallen victim to Astoria’s trend toward gentrification. The decades-old pizza joint had its windows covered with newspaper and was undergoing a metamorphosis into yet another Manhattan-style eatery.

Many years earlier, my friends and I were regulars at Joe’s (although we never got a satisfactory answer as to why it wasn’t named after Gino, the owner). We'd hit up passersby for jukebox money, order a slice, and then wait for other customers to put their money down on the counter so we could pretend it was ours to pay for the slice (and maybe even get an Italian ice, on a good night). Through it all, Gino seemed to like us. He even sponsored our 14-and-under softball team with jerseys that unfortunately read: Joe’s Pizzera. No spell-check back then. He sent ‘em back and they did try to split the “r” to look like “ri.” I still have the jersey so have a look for yourself: 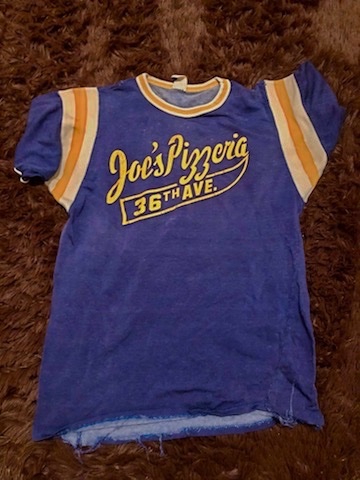 Whenever we won (which we usually did), Gino would give everyone on the team a free slice. Not satisfied with the meager schedule of games provided to us by the (original) Long Island City YMCA, we’d occasionally don our jerseys on off-nights and show up with heroic tales of late-inning comebacks.

Gino never questioned our arduous softball schedule or lack of bats and gloves, so we’d get more free slices. There we were, listening to what is now “classic” rock on the jukebox (me flirting with Connie V.) — a group of juvenile delinquents in pizza sauce-stained jerseys, fueling up before the long night of mischief ahead.

These images and more came to me in a flood in 2003 as I neared the soon-to-be-trendy-café. When I got closer, you see, I discovered that the newspaper being used to block out the windows of my old haunt was the first issue of Wide Angle — a local arts and culture publication for which I was serving as senior editor at that time. In fact, there was my very own column (named Cool Observer) and byline facing out towards the street. It was being used to cover a window from which a much younger version of me once gazed, thinking who-knows-what. As I said, life-flashing-before-your-eyes and all that. 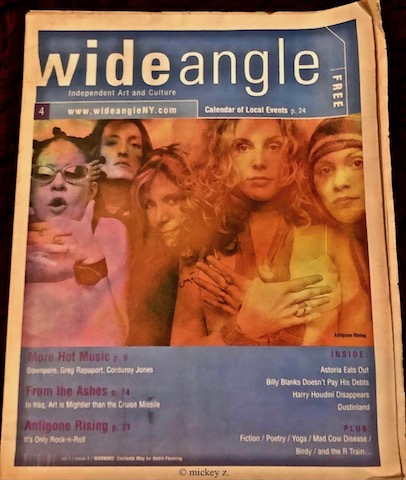 An issue of the long-defunct Wide Angle

I played first base for the Joe’s Pizzera softball team… unusual for my size but, hey, I’ve never done the expected, I guess. I made the all-star team and my Dad wanted to come to watch me. It was being played at the old L.I.C. High School yard just three blocks away from our fourth-floor walk-up, but I asked him to stay home. When you’re 14, parents are useless (unless you consider being annoying a use). Plus, I had a reputation to uphold, right?

Midway through the game, I made a big play in the field and looked around at the folks clapping for me. That’s when I noticed my Dad watching near third base, trying to hide behind the entrance gate. The next inning, I doubled with the bases loaded. I ended up coming in a close second for game MVP award. I did all this while my Dad proudly and surreptitiously watched. Thankfully, he got to see me in action and I was so glad he had ignored my petulant edict. I suppose that’s why 14-year-olds don’t run the world.

Fast-Forward to spring 2003: Joe’s Pizzeria (with or without the second “i”) is gone. The pages of Wide Angle (also long gone now) were being used to camouflage its future incarnation. I wonder, what would the 14-year-old me think of all this “progress”? Would that long-haired punk give much thought to the odd character with the shaved head wistfully gazing at a window covered in newspaper? Would he find any interest in the subversive message of that Cool Observer column? Would this glimpse into his future inspire curiosity… or dread? Nah, none of that serious stuff. The 14-year-old me would’ve had only one thing to say to his elder counterpart: “Mister, ya got a quarter?” 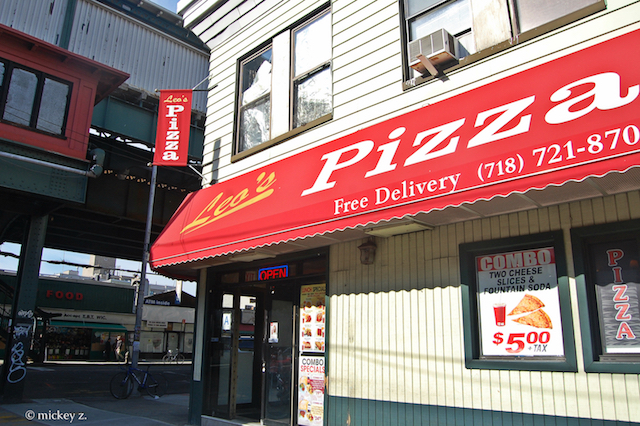 Coda: The hipster eatery failed. The former “Joe’s” went back to being an old-school neighborhood pizza joint, this time called “Leo’s” (see photo above).