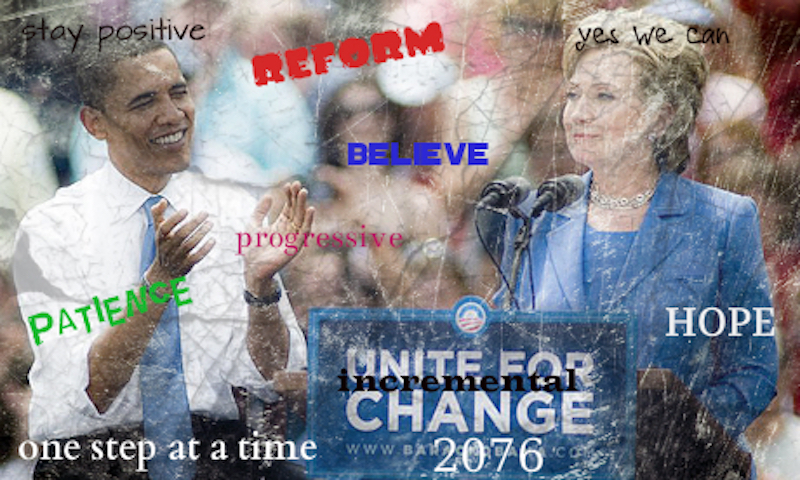 Before we talk about the gradual, measured build-up to that all-important 2076 election, first things first: Hail Obama, our brilliant, articulate, and eloquent savior!

All right, so maybe St. Barack has been a tad less progressive than we initially imagined but you can’t say he’s not brilliant, articulate, and eloquent! Right? Plus, c’mon, folks, he’s not even out of office yet. Give the poor guy a chance. You think it’s easy standing up to those nasty Republicans day-in and day-out? Incremental, remember? In-cre-men-tal.

This final year, let’s really hold his feet to the fire and make some serious progressive progress. We’ll get permits to hold weekend protests and give voice to the voiceless (in our designated free speech zones, of course). President Obama will hear us, I’m certain of it. He’ll prove there’s a HUGE difference between the two parties! We just have to be more patient!

For example, I’m willing to go out on a limb right now and boldly predict that by the time Obama is done, the number of U.S. Troops (Our Brave Men and Women™) in Iraq and Afghanistan (and a few other sandy places I may be forgetting) will possibly have decreased by at least .05 percent.

To those who demand more, I ask: Do you expect our leader to simply withdraw our brave, heroic, gallant, valiant, superhuman men and women all in one shot? Not unless you want the terrorists to win, that is. There’s no cut and run for the good ol’ USA. (And never forget: we wouldn’t be in this mess if that damn egotistical Ralph Nader hadn’t ruined everything in 2000. He shouldn’t be allowed to run ever again. Make it illegal, I say.)

Looking ahead, yes, we’ll face some minor bumps in the road (e.g. economic, social, and environmental collapse) but I’m totally confident we’ll soon have America’s first female president -- Hillary Clinton -- and she’ll be in office until 2024. Hooray!!!!! What a proud moment for the world’s greatest nation. Equality is ours!!! Patriarchy is history!!!

The stoic, step-by-step march towards 2076 continues…

Sure, those mean Republicans will steal an election or two. They may even stage one of their infamous false flag operations (something a Democrat would never participate in). But fear not, liberal colleagues, we will prevail. Progressive values will never die and no slimy Republican or more-radical-than-thou nihilist can tell me different.

I have faith. I have hope. I believe. I read HuffPo. I watch The Daily Show. I regularly tweet at Rachel Maddow. I’m part of the solution, pal. Are you? If you’re not with me, you’re against me!!! This is change I can believe in!!! And how!

Maybe we’ll rescue the planet by cutting emissions by 2 or 3 percent, eradicate poverty by raising the minimum wage by at least 25 cents an hour, and make it so much easier to be a loyal American consumer by making sure the national ID card becomes mandatory! Shopping = freedom!!!

What’s that you say? In the United States, there is a reported rape every 6.2 minutes (key word: reported); one in five women will be raped in her lifetime; and 99.8 percent of those convicted for rape are men? Ten thousand gallons of gasoline are burned in the United States every second? We’re losing 200,000 acres of rain forest every 24 hours? 2.2 billion pounds of pesticides are used by Americans each year? At least 150 to 200 plant and animal species go extinct each day? Eighty-one tons of mercury are emitted into the atmosphere each year as a result of electric power generation? The breast milk of every mother on Earth contains dioxins? Every square mile of ocean hosts 46,000 pieces of floating plastic? Thirteen million tons of toxic chemicals released across the globe each and every day? Seventy thousand new chemical compounds have been invented and dispersed into our environment since 1950? There will be no glaciers left in Glacier National Park by 2030? The Arctic region expected to have its first completely ice-free summer in 2040? Coastal glaciers in Greenland thinning by three feet per year? Roughly 93 percent of the large fish in the ocean are already gone? About 78 percent of the world’s old-growth are already gone? Every two seconds, a human being starves to death while 29,158 children under the age of five die from preventable causes every single day?

Don’t bum me out with your pessimistic stats and un-constructive attitude. You’re full of bad news but I notice you haven’t offered a solution. You have no plan. We do! Remember, it’s always best to focus on the positive and not dwell on gloom and doom. That’s how we pulled together to end racism back in the 1960s and abolish homophobia, um, a couple of months ago or so!

Sure, some things are a little messed up here and there but I deeply sense in my heart of hearts that change will come. It will come slowly, but it will come!!! By the time we finally get to that all-important 2076 election, true radicals will finally be able to vote their conscious. No more lesser evil. No more hold your nose and pull the lever. At long last, we’ll have a presidential hologram that the people (well, whatever humans who are still alive) can support without compromise.

Stay tuned for 2076, folks. Democracy, peace, justice, and solidarity will be ours -- just in time for America’s 300th birthday!

Mickey Z. is the author of 13 books, most recently Occupy these Photos: NYC Activism Through a Radical Lens. Until the laws are changed or the power runs out, he can be found on the Web here and here. Anyone wishing to support his activist efforts can do so by making a donation here.

"Obama, Hillary, and All-Important 2076 Election" by Mickey Z. is licensed under a Creative Commons Attribution-ShareAlike 4.0 International License.
Based on a work at https://worldnewstrust.com/obama-hillary-and-all-important-2076-election-mickey-z.