Not Getting Vaccinated to Own Your Fellow Libs | Eoin Higgins 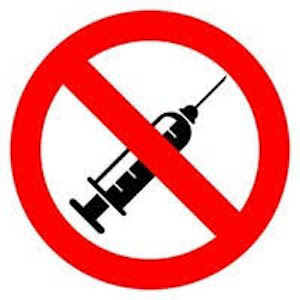 They’ve aligned themselves with forces they despise. But lefty anti-vaxxers don’t see the contradiction

Sept. 22, 2021 (The Atlantic) -- Conspiracy theorists who discount the safety and efficacy of COVID-19 vaccines and other public-health mandates are often portrayed in the media as right-wing.

That’s for good reason: a not-insignificant number of the most vocal conspiracists tie their ideology firmly to President Donald Trump and the right-wing MAGA movement he inspired. Videos of angry red-state demonstrators pushing back against school boards and other local authorities in public hearings, and repeating outlandish, baseless misinformation, have made the rounds in traditional media.

But in the hills of western Massachusetts and in neighboring regions of upstate New York, a traditionally left-leaning area, these theories also hold purchase. I grew up in the region and started my journalistic career there. I’ve been arguing with residents, many of whom are close friends, about vaccines for more than a decade. But despite my efforts, and the efforts of many others, a stubborn resistance to reality has set in here, and only deepened since the pandemic began.

Late last month, Do We Need This?, a group of anti-vaxxers and vaccine-mandate opponents, held a “festival” in the region to raise money for their cause, suggesting a $20 donation for entry. They shared the proceeds with other national vaccine-skeptic groups, including NY Stands Up!, the Informed Consent Action Network, and Robert Kennedy Jr.’s Children’s Health Defense.

Anti-vaxxers in the Taconics-Berkshires region include local organic farmers, members of homeschooling and alternative-education communities, anti-war hippies, and the occasional alt-right conspiracist. The anti-vax faction here has its roots in the left-libertarian politics of the Back to the Land movement, which flooded the area with the disaffected urban upper-middle class in the 1970s and ’80s. That influx of hippies and students, most of whom came from New York City, brought with it a political belief in naturopathy and a mistrust of institutional authority.