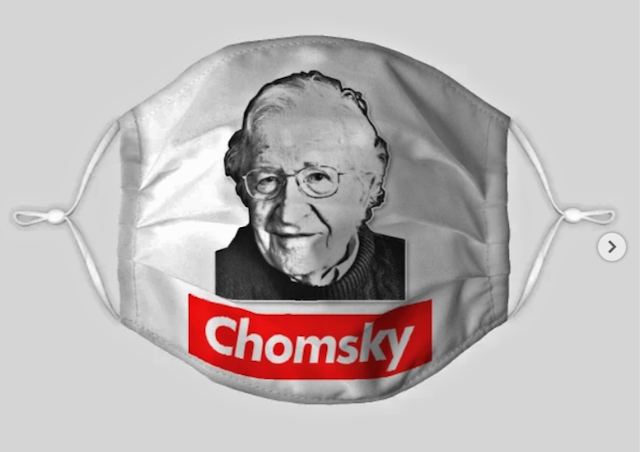 Renowned “New Left” hero, Noam Chomsky, once said this: “The picture of the world that's presented to the public has only the remotest relation to reality. The truth of the matter is buried under edifice after edifice of lies upon lies.”

Far more recently, he had this to say about the “unvaccinated”: “They should have the decency to remove themselves from the community. If they refuse to do that, measures have to be taken.” He claimed the U.S. government must “establish conventions” to deal with such “killers” — foolishly equating them to someone who refuses to stop at red lights when driving. Ladies and gentlemen, I give you “arguably the most important intellectual alive today.”

Many years ago, Chomsky helped introduce me to the realm of intellectual self-defense. We exchanged real letters in the pre-internet days of yore. I met him at a lecture he gave on linguistics and cognitive science and we became colleagues, if not friends. I interviewed him and later, consoled him when his wife passed away. Eventually, I drifted from him. I formed my own path and found myself disagreeing with him more and more. But I never imagined him as a fascist.

After all, this is a man who defended the right of everyone — including Holocaust deniers — to speak their minds. I mean, he co-wrote the damn book on recognizing media manipulation: 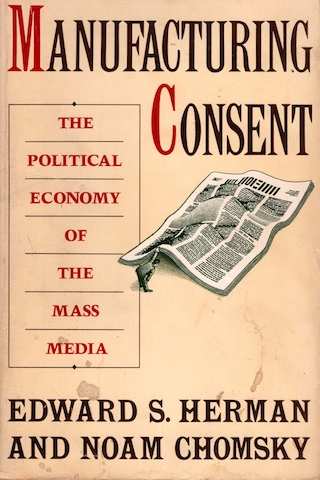 About the mission of the corporate media, Chomsky once wrote: “You've got to keep them pretty scared, because unless they're properly scared and frightened of all kinds of devils that are going destroy them from outside or inside or somewhere, they may start to think, which is very dangerous.”

With that in mind, you’d imagine that good ol’ Noam would be mighty skeptical of the relentless and obviously deceptive corporate media reports about Covid — especially considering how many billions of dollars companies like Pfizer spend to “sponsor” the news. I ask you to juxtapose slogans like “stop the spread,” “flatten the curve,” and “we’re all in this together” with Chomsky’s own words:

Yet, somehow, the respected “radical” has forgotten his own lessons. Somehow, the respected anarchist has embraced fake news and yes, fascism. About the “unvaccinated,” he also recently stated: “If it ever reaches the point where they are severely endangering people, then you have to do something about it.” When asked to explain the logistics of this stance (without a shred of science to back it up), he added: “How can we get food to them? Well, that’s actually their problem.” He supposed the state must “secure their survival just as you do with people in jail.” No matter where you stand on the jab, surely you recognize that the “progressive” icon is advocating totalitarian tactics.

For the record, he’s also exposed his ignorance by making a moronic comparison of the current situation to smallpox. Even if you swallow the Covid narrative whole cloth, I hope you know that the main reason smallpox was eradicated was because it lacked an animal reservoir. SARS-CoV-2 — like all respiratory viruses — has an animal reservoir and thus cannot be easily tackled like, say, smallpox or polio. The most important intellectual alive today is woefully uninformed of this and countless other pandemic-related facts. (But that sure doesn’t prevent him from talking about it.) 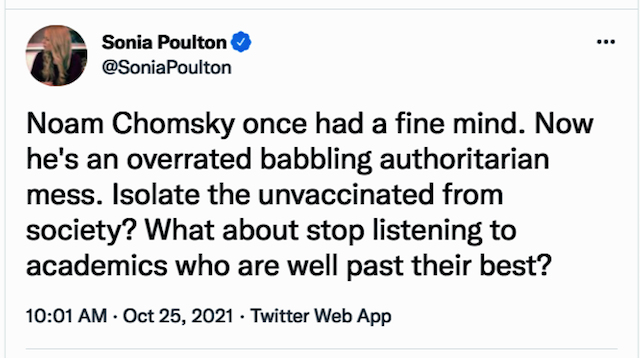 This pathetic display does not negate all of Chomsky’s earlier work — at least not in my mind. Personally speaking, it doesn’t negate his mentorship. If anything, it’s quite helpful as a lesson in intellectual self-defense. The great Noam Chomsky has become nothing more than a tragic cautionary tale. After all, if he can be so easily manipulated by propaganda, what makes any of us imagine we are immune? Stay vigilant, my friends, and remember to keep your guard up at all times.

Mickey Z. is the creator of a podcast called Post-Woke. You can subscribe here. He is also the founder of Helping Homeless Women - NYC, offering direct relief to women on New York City streets. To help him grow this project, CLICK HERE and donate right now.