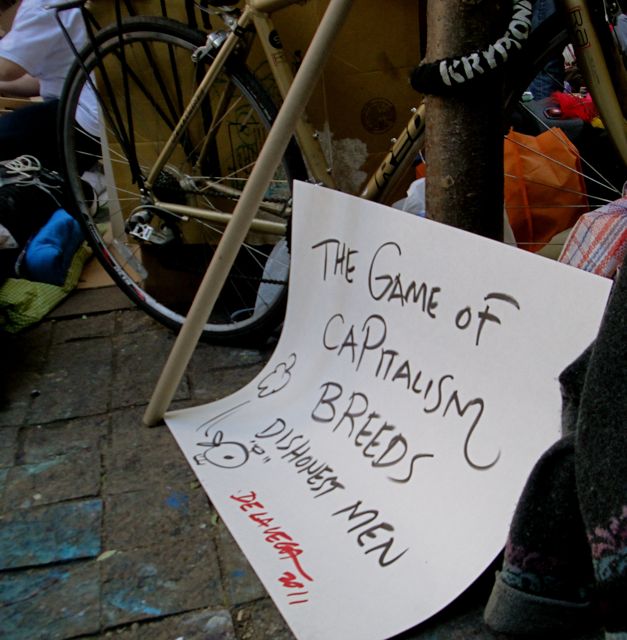 "A liberal is the guy who leaves the room when a fight starts." --Big Bill Haywood

"An occupant is the person who starts the fight." --Mickey Z.

Mar. 3, 2012 -- This just in: At the 2012 "Left" Forum, attendees will have the opportunity to experience pearls of wit and wisdom rained down upon them during a special address from none other than -- wait for it -- Michael Moore.

When I learned of this seemingly inevitable decision, I just had to reach back into some previous writing of mine to help make certain that authentic radicals fully understand why Moore is less.

Mic Check: Michael Moore is not a leftist... but he does play one on TV.

Michael Moore makes movies, writes books, produces TV shows, and has built-in pacifist radar (hey, he endorsed "anti-war" candidate Wes Clark in 2004, didn't he?). But that's not the extent of his varied skills.

(Since more than 100 humans get killed in motor vehicles each day in America, they must not be so adroit in the "wild," either.)

Besides the impressive credentials listed above, the intrepid Mr. Moore (or better yet, McMoore) has got it going on when it comes to the kitchen. As you might expect, he's quite the maverick... unafraid to step on toes. For example, he defiantly urges his readers to "lay off carrying on about the milk, no matter how bad it is for you."

The corporate avenger also admits: "I like Whoppers. Flame-broiled, juicy, chock-full of onions and lettuce and loads of secret ingredients. They're big too; bigger than the Big Mac."

Besides sharing such deep insights about dairy products and mass-produced death burgers made from doomed cattle on land cleared in rainforests, the food maven has this to offer in terms of nutritional advice:

I could go on (and on and on and on) breaking down McMoore's all-around acumen but let's sum things up with something particularly timely: His January 2012 declaration that it's fine and dandy to be critical of the current War-Criminal-in-Residence -- as long as you still vote for him. (insert rimshot here)

Translation: McMoore and his ilk (and do I really have to name names?) will speak in occupied tongues all the way to the Democratic Convention -- until it's time to fall in line behind the status quo that is threatening all life on earth.

The liberal-in-radical-clothes list grows by the day -- including, yes, the Left Forum itself -- all seeking to co-opt the energy, creativity, momentum, and rage of the Occupy Wall Street (OWS) movement.

But it ain't gonna happen...

To you on the predator drone-Left, I echo Ralph Nader's words to McMoore: "Redeem yourself or forever be consigned to history’s judgment of political turncoats, renegades and saboteurs."

To the rest of you, I implore: #OccupyNoLeaders.

The media desperately wants and needs to identify leaders therefore, self-serving charlatans like Clueless Mikey McMoore are ever ready to step up and fill that alleged void.

Mic Check: As those on the ground with OWS long ago realized, we don't need no stinkin' leaders.

Instead, let's all #occupy, participate, communicate, listen, and learn because (as usual) the reality is diametrically opposed to the conventional wisdom: Everyone at OWS is a "leader." It is a movement comprised of thousands of "leaders" from all walks of life -- working collectively and sharing skills.

In the words of Mumia Abu-Jamal: "This is People's Power, sparked, in part by the mass protests in Cairo and Wisconsin. Other sparks were the Troy Davis injustice, the assault on several demonstrators by New York cops, the repression on the poor and working class by the political class, and discontent with the long, wasted years at mindless wars abroad. This is people's power. May it remain so."

To which I'd urgently add: May people's power also involve love and respect for the power of non-humans and the entire eco-system.