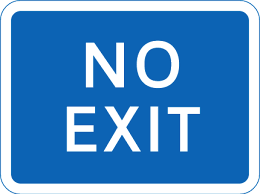 A most curious feature in the current low state of American politics is the delusional thinking at both ends of the political spectrum.

Both factions have gone off the rails mentally, and the parties they represent race toward oblivion like Thelma and Louise in their beater car. More ominously, there are no new factions with a grip on reality even beginning to form anywhere in the background -- as in the 1850s when the Whigs foundered and the party of Lincoln segued into power.

To see the Democrats go on about “Russian collusion” you would think we were watching a rerun of the John Birch Society in its heyday. Americans who have done business in Russia as private citizens are being persecuted as though they were trading with the enemy in wartime. Newsflash: we are not at war with Russia, which, by the way, is no longer the Soviet Union. It is one of many European countries that Americans are entitled to do business in -- even in the case of General Mike Flynn accepting a $20,000 speaking fee from the RT news company. Has anyone noticed that Ben Bernanke routinely takes $200,000-plus speaking fees in many foreign countries whose interests are not identical to ours and no one is persecuting him.

Likewise, the insane idea that it is malfeasant for high public officials to speak to Russian officials, or for the president to share sensitive strategic information with them, especially about genuine mutual enemies such the various Islamic jihad armies. Since when is that beyond the pale? Well, since January of this year when the Democrat Party ordained that members of the Trump transition team were forbidden to speak to Russian diplomats at the highest level. Do you suppose that, in the hothouse of Washington, incoming foreign policy officers of Obama’s government had no conversations with foreign diplomats between the election of 2008 and Obama’s inauguration? The idea is laughable.

Even more disturbing to me personally, as someone who registered as a Democrat back in 1972, are the disgraceful and dangerous ideas emanating from the university world, which is universally dominated by the Left. For example, the recent movement on several campus to re-segregate student housing by race -- in the name of “diversity and inclusion.” This is a species of doublethink that would make George Orwell gasp, and I have yet to hear of a college president or dean who dares to object. The sanctioning of this deranged hypocrisy is shaping a generation that could easily turn into political monsters when they eventually come into power -- and that coming-to-power may coincide with much more desperate economic conditions on the road ahead.

Not long ago, the Dem-Progs’ mouthpiece The New York Times ran a front-page story (a video, actually, on their Web edition) titled A Gender Fluid Mother’s Day, featuring a man pretending to be a woman reading to children. Notice that The Times’ official link actually says “mothers-day-gender-drag-queen-story-hour.” I didn’t make this up. It’s part of the newspaper’s long campaign to erase the boundary between the sordid and the normative, and to ram it down the public’s throat as good medicine. Doesn’t the newspaper of record have better things to devote its front page to? Are there not other issues of public life more urgent than valorizing drag queens? And to what end are they campaigning for this? A utopian extinction of sexual categories?

The party of the right, the Republicans, have made themselves hostages to the marginal personality of Donald Trump, who prevailed over a cast of Republican empty suits in the pathetic and appalling primary contests of last spring. The Republican party has not demonstrated that it has the dimmest idea what is going on “out there” in the very flyover districts its minions and flunkies pretend to represent, or that they believe in anything not cynically calculated to bamboozle the economically immiserated classes left behind by their deliberate asset-stripping approach to the public interest. Since the very get-go of Trumptopia, it appears that the Golden Golem of Greatness will finally sink the Republican Party -- or perhaps just drown it in Grover Norquist’s famous bathtub.

My own guess is that in last-ditch desperation, the Republicans will not just abandon the president but actively join his adversaries on the other side to drive him out of the White House. And then, rightly, wrongly, or foolishly, you will see the immiserated former working class actually take up arms against the government for toppling their hero, and that will be the end of the fake faux-financialized economy that ought to be the real news you’re not reading about in The New York Times.