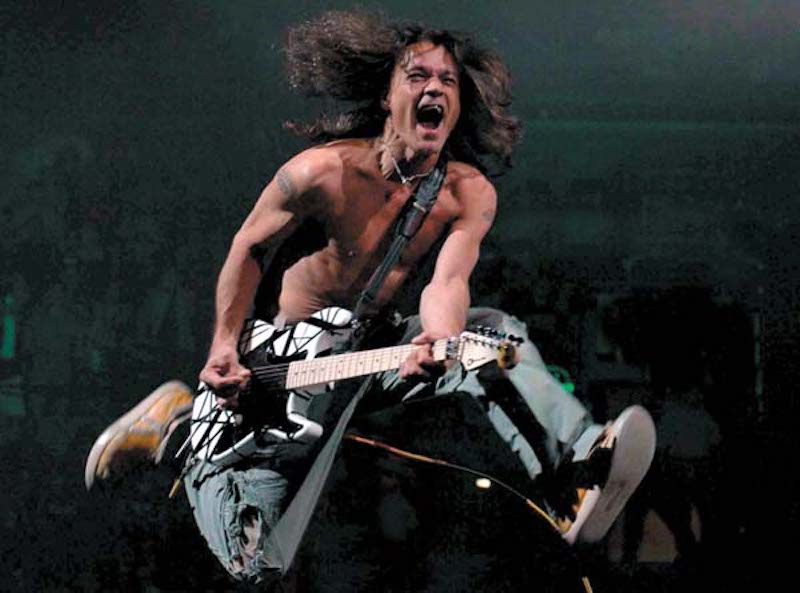 Edward Van Halen (EVH) was my favorite guitarist of all-time. As a disciple of what is now called “classic rock,” it’s disconcerting for me to be living through this current time period when the guitar is not a major factor in popular music. After all, I can still play note-for-note air guitar to all of EVH’s solos. The following collection of remembrances and anecdotes goes out to anyone impressed with such a “skill.”

EVH ushered in the era of guitarist as acrobat. Prior to 1978, rock guitarists seemed to do their thing while in a drug-induced groove. Edward did more than his share of drugs, of course, but his playing felt discrete from that material reality. With both hands on the fretboard, his fingers appeared to stretch across otherworldly distances at a speed that defied human physiology. All this despite the fact that EVH never learned to read music. His foundation was a blend of profound intuition and relentless, dedicated practice.

Van Halen’s debut album (which today feels more like a “greatest hits” collection) marked a sea change in rock music just at a time when punk was supposedly dismantling the need for musical virtuosity (or even skill). By the time he crossed over audiences to play the solo on Michael Jackson’s “Beat It” (back when it still felt innocent and harmless to listen to Thriller), Edward has transcended musical genre. I mean, among other things, this guitar hero patented his own supporting device for stringed musical instruments! 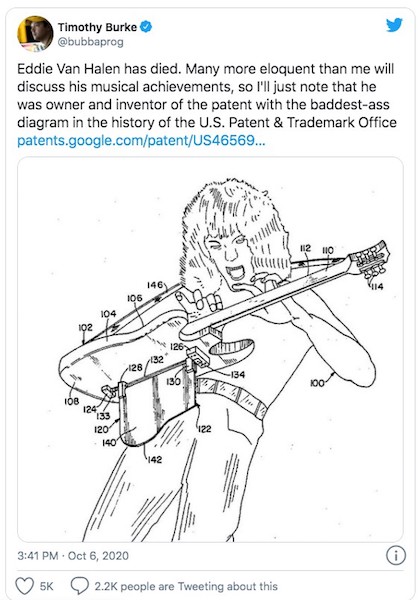 I never got to meet Edward Van Halen but I did have a very fun encounter with his original singer, David Lee Roth (DLR). After DLR left Van Halen, he went on tour with an all-star band. Around that time, one of my personal training clients was original MTV VeeJay, Mark Goodman. When I told Mark I had tickets to see Dave at the Byrne Arena in New Jersey, he told me he’d get me and my friends backstage to hang out with the band on DLR’s birthday.

After an epic concert (in which Diamond Dave un-ironically called New Jersey “the rock and roll capital of the world”) me and three cohorts found ourselves rubbing elbows with Wayne Gretzky and Janet Jones, tennis star Vitas Gerulaitis, and many others. Also on hand were the cheerleaders for the New Jersey Generals — a football team owned by [wait for it] Donald J. Trump. Interestingly, I already knew one of those cheerleaders. We worked together at a gym for a while.

Anyway, I found myself chatting with DLR’s bassist extraordinaire, Billy Sheehan. He gleefully told me tales of life on the road. Sheehan also could not stop raving about the band’s guitar wizard, Steve Vai — calling him the best musician he’d ever met. So, I made my way over to Vai to learn more. He was friendly and down-to-earth and our conversation eventually drifted around to EVH. Vai spoke reverentially about Edward and confided in me that his favorite EVH solo was on “Push Comes to Shove.”

Suddenly, there was a buzz in the room and we knew the birthday boy had arrived. Mark Goodman called out to me, “Hey Mickey, come here and meet Dave.” DLR looked tired or wasted or both. As for me, I guess now is a good time to inform you that I was wearing a string tank top strategically designed to accentuate my tanned musculature (standard operating procedure for me at the time). Since DLR was renowned for his fitness, he stopped dead in his tracks when Mark introduced us.

I wished him a happy birthday and stuck out my hand to shake. Instead of obliging, Dave walked a very slow circle around me — looking me up and down. When he got back in front of me, he turned to Mark and asked: “Dude, you had to bring this guy here tonight?” There were about two seconds of silence before DLR burst into laughter and hugged me. “Just messing with you,” he whispered, “you look great, man.”

Everyone joined in the laughter but Dave’s attention was already elsewhere. He had just noticed the cheerleaders. Without a word, he walked off with all of them. As for us, we got invited to continue the party at the band’s hotel. For the record, this happened mostly because one of my friends happened to be the gorgeous star of a popular soap opera and Dave’s manager (Pete) wanted to flirt with her.

About 20 minutes later, we’re all hanging out in Pete’s room when he literally forgot what city or state we were in. My soap opera friend quipped, “How could you not remember? This is the rock and roll capital of the world!” (insert rimshot here) 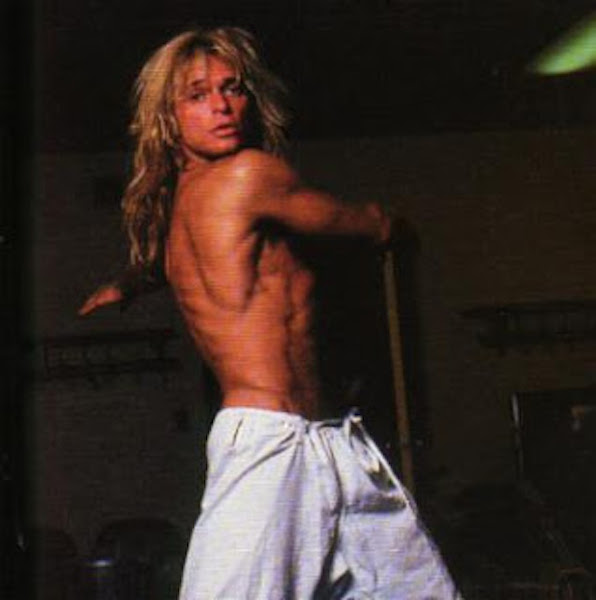 My ceaseless concert-going eventually led me to make my own music. I sang and wrote lyrics for a band that included a future Astoria councilman. We practiced and cut a 4-track demo, but things did not progress beyond that. We never even named the band! We did get invited to play at a local dance… but the deal fizzled.

The burgeoning politician and I differed over some of my lyrics. He didn’t like lines such as: “Our fathers show us paths they call proven/But into the past is where they are moving” (his Dad was already a politician). All that said, I’m still convinced that at least one of our tunes, “Somewhere in Astoria,” was really something special.

From there, I found a new music-related avenue: band management. My friend John and I went to see the up-and-coming White Lion at L’Amour’s in Brooklyn (John was friends with the band's lead singer, Mike Tramp). The show rocked and we were mightily impressed. On the way home, John casually mentioned he knew a guitarist (Anthony) he felt was as talented as White Lion’s Vito Bratta. I quickly mentioned a singer I knew (Howie) who could blow Tramp off the stage. In short order, we introduced Howie and Anthony — two hardcore Van Halen aficionados — and Cloak and Dagger was born.

No record deals were signed, no giant concerts were played. But, as their manager for about a year, I experienced some incredible rock and roll episodes — experiences I’d never trade. For example, watching Cloak and Dagger rock a jam-packed CBGB’s was my personal Woodstock. 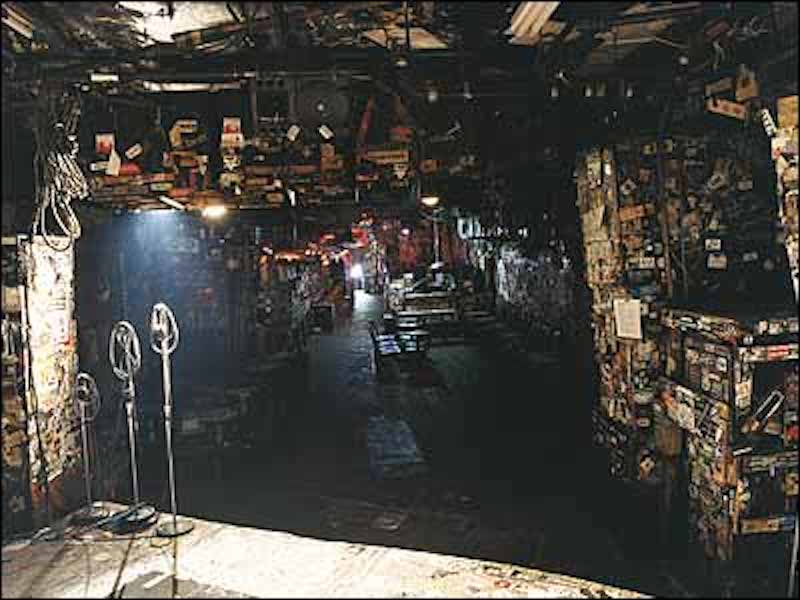 A view from the stage at CBGB (Photo: Corinne May Botz)

I never got to meet Edward Van Halen but I did get awfully close. My friend James and I learned that Van Halen (Sammy Hagar version) was planning to film a show in New Haven for VHS release (remember those?). Like good little New Yorkers, we bought the cheapest available tickets and proceeded to breeze past the Connecticut security… all the way down to the orchestra seats.

When EVH took the stage by himself, getting started on his infamous 20-minute guitar solo, James and I kept inching closer. A security guard stepped in to confront us. We stared him down and he let us stay as long as we “didn’t cause any trouble.” Long story short, I ended up a mere three feet or so from Eddie as he banged out the legendary intro to “Mean Street.”

I’ve seen Van Halen in many venues — including stadiums with sound systems large enough to challenge a fighter jet in decibel level. But there was NOTHING like being close enough to EVH to practically feel him breathe. The unmatched tone of his guitar, that goofy grin, and the remarkable dexterity of his fingers — it was a complete sensory experience. 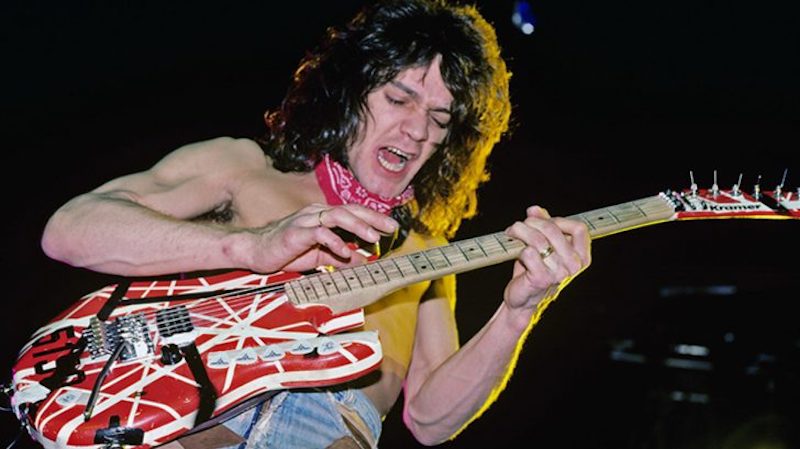