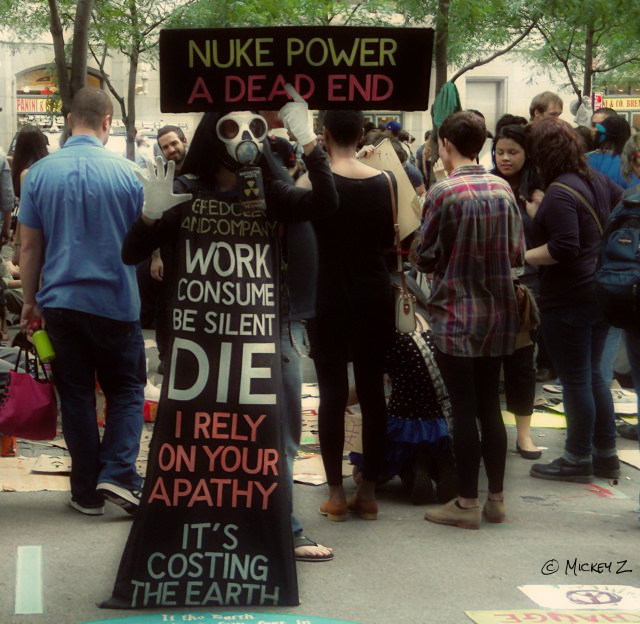 Our history books and newspaper headlines portray an ever-benevolent United States as minding its own business, yet incessantly plagued by surprise events and unprovoked threats to test its celebrated patience.

This long record of conjuring up dubious rationales to wage war indicts those on both sides (sic) of the proverbial aisle -- equally.

As corporate-funded war criminal Barack Obama once declared: "We're leading the fight against nuclear dangers. We've applied the strongest sanctions ever on … nations that cannot be allowed to threaten the world with nuclear weapons."

Yep, since Iran obviously has the audacity to make decisions without first asking for U.S. (or Israeli) permission, we are now faced with the spectacle of America -- the only nation to have used nuclear weapons on civilians -- warning the world about how nuclear weapons might be, well, used on civilians.

Of course, this is very familiar ground for the Land of the Free™.

I'll Take Manhattan
“With proper tactics, nuclear war need not be as destructive as it appears.”

It was in 1942, at the University of Chicago, that physicists working under Arthur Compton, Enrico Fermi, and others produced fission of the uranium isotope U-235. In other words: a nuclear chain reaction. With an ultra-secret $2.2 billion investment (the equivalent of nearly $30 billion today), the Manhattan Project began that same year.

Nearly 200,000 workers toiled in 37 installations in 19 states and Canada. On July 16, 1945, an atomic bomb was successfully detonated at Alamogordo, New Mexico after which Senator Brien McMahon of Connecticut called it “the most important thing in history since the birth of Jesus Christ.”

While the long term effects of the Manhattan Project are still being calculated, the initial consequences of this Second Coming, of course, were felt by Japanese civilians. Sixty percent of Hiroshima, a city with a population of roughly 343,000, was destroyed on Aug. 6, 1945.

A Tokyo radio broadcast two days later described how “the impact of the bomb was so terrific that practically all living things, human and animal, were seared to death by the tremendous heat and pressure engendered by the blast.”

Tokyo radio went on to call Hiroshima a city with corpses “too numerous to be counted … literally seared to death.” It was impossible to “distinguish between men and women.”

The Associated Press carried the first eyewitness account: a Japanese solider who described the victims as “bloated and scorched -- such an awesome sight -- their legs and bodies stripped of clothes and burned with a huge blister.”

The dropping of the second bomb on Nagasaki on Aug. 9, 1945, has never been convincingly explained. “Was it because this was a plutonium bomb whereas the Hiroshima bomb was a uranium bomb?” asked Howard Zinn. “Were the dead and irradiated of Nagasaki victim of a scientific experiment?”

(If anyone is thinking right about now that those bombings were "necessary," feel free to contact me. I'll be happy to debunk that murderous myth for the thousandth time.)

The men that devised and carried out America's nuclear attacks on Japanese civilians are generally considered to be part of this country’s "greatest generation," yet, by any sane definition, what I just detailed is nuclear terrorism -- and it continues to this day.

Just DU It
“A world without nuclear weapons would be less stable and more dangerous for all of us.”

Nuclear weapons may be a hot topic when discussing Iran or North Korea, but how many know that the United States regularly uses depleted uranium (DU) when waging its seemingly endless wars (and when training in places like Vieques, Puerto Rico, for such wars)?

DU is the byproduct of uranium enrichment, a waste product of the nuclear industry. As the International Coalition to Ban Uranium Weapons explains: "Depleted uranium itself is a chemically toxic and radioactive compound, which is used in armor piercing munitions because of its very high density. It is 1.7 times denser than lead. This allows it to easily penetrate the steel armor of tanks and other vehicles when fired at high velocity."

"When fired," explains James Ridgeway in the Village Voice, "the uranium bursts into flame and all but liquefies, searing through steel armor like a white hot phosphorescent flare. The heat of the shell causes any diesel fuel vapors in the enemy tank to explode, and the crew inside is burned alive."

John Gofman is a former associate director of Livermore National Laboratory, one of the scientists who worked on the atomic bomb, and co-discoverer of uranium-233. He knows a thing or three about radiation. "There is no safe dose or dose rate below which dangers disappear. No threshold-dose,'" Gofman says. "Serious, lethal effects from minimal radiation doses are not 'hypothetical,' 'just theoretical,' or 'imaginary.' They are real."

Also real: Seven decades of fallout from nuclear testing, the inherent dangers of nuclear power plants, the fact that nuclear power is not carbon-free, and U.S. plans for a new generation of nuclear-powered drones.

All of this radioactive reality comes courtesy not of Iran, Iraq, North Korea, or ISIS, but instead it's brought to you by none other than the Home of the Brave™

Know Yer History
“The nuclear arms race is like two sworn enemies standing waist deep in gasoline, one with three matches, the other with five.”

“Why did we drop (the bomb)?” pondered Studs Terkel in 1995, on the 50th anniversary of the Hiroshima and Nagasaki bombings.

“So little Harry could show Molotov and Stalin we’ve got the cards,” Terkel explained. “That was the phrase Truman used. We showed the goddamned Russians we’ve got something and they’d better behave themselves in Europe. That’s why it was dropped. The evidence is overwhelming. And yet you tell that to 99 percent of Americans and they’ll spit in your eye.”

Translation: The United States will gleefully use depleted uranium weapons on Iranian civilians in the name of stopping Iran from developing nuclear weapons that they will allegedly use on (wait for it) civilians.

The cycle of violence that includes such deadly hypocrisy is a defining characteristic of our dominant culture. Thus, genuine and enduring social change will never happen "within the system" or from the top-down.

The path, as always, begins with us choosing to think for ourselves, us sharing our knowledge and skills, and us taking immediate and sustained action.

The "99 percent of Americans" Studs Terkel mentioned in 1995 still very much want to spit in someone's eye -- but this time around, we're aiming upward, at the top 1% and Obama himself.

©WorldNewsTrust.com -- Share and re-post this story. Please include this copyright notice and a link to World News Trust.

Meet The Planet’s Most Dangerous Nuclear Rogue State by Mickey Z. is licensed under a Creative Commons Attribution-ShareAlike 4.0 International License.
Based on a work at https://worldnewstrust.com/meet-the-planet-s-most-dangerous-nuclear-rogue-state-mickey-z.