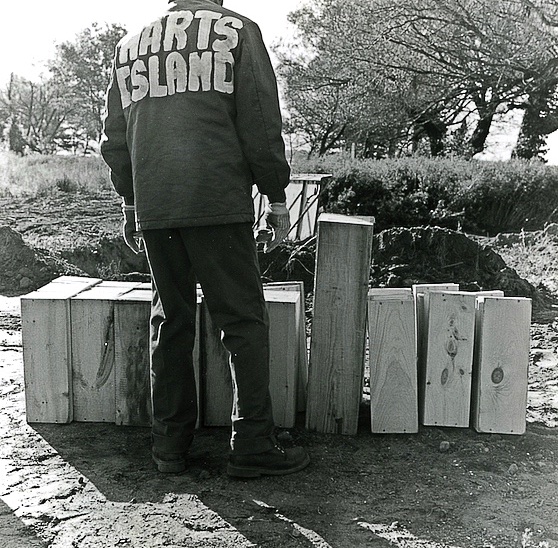 Imagine a tiny, off-limits, allegedly haunted island upon which prisoners are recruited to dig mass graves for adults and children alike. Some of those bodies, by the way, are first used as medical cadavers.

Hart Island is located at the western end of the Long Island Sound, off the coast of the northeastern Bronx. Despite being only one mile long and 1/3 mile wide, it’s home to more than one million souls. It could be the tenth most populous city in the U.S. -- ranked above teeming metropolises like San Francisco, Denver, D.C., Boston, and Detroit.

I say “could” because Hart Island, as a potter’s field for New York City, is actually the largest tax-funded cemetery in the world. And, until 2019, it was manned by grave-digging inmate labor shipped over from nearby Rikers Island. 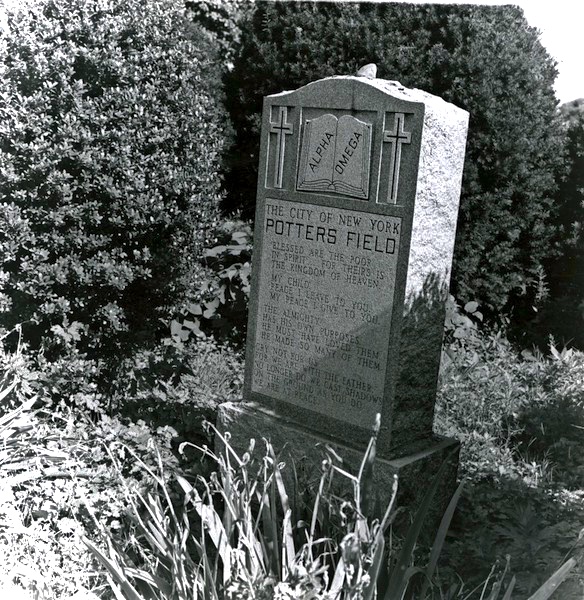 Generally speaking, a potter’s field is where any city buries the bodies (and body parts) of those not claimed by any family members or unable to afford a private funeral. This typically includes the homeless, indigent, and people who live alone and below the poverty line. Low-income victims of epidemics and pandemics are often buried in such a location -- a fact I will confess to ruminating over this past March and April in NYC.

Near the very end of his life, my grandfather (you learned a little about him here) would half-jokingly implore my mother to abandon him in the hospital. “They’ll put me in a potter’s field,” he explained, “and you won’t have to waste money on a funeral.” For the record, Mom did not take Grandpa up on his suggestion.

Why “Hart” Island, you wonder? Like so many other Big Apple tales, there are a couple of colorful but questionable origin stories. The Middle English word “hart” means “stag.” This kinda-sorta makes sense when you consider that the island was once used as a game preserve. Also, deer did migrate from the mainland when ice covered this geographic region way back when.

The yarn I prefer, for its poetic license, is that British cartographers originally called it “Heart” Island due to its shape. To believe this story is to assume the cartographers to be quite inept as the island’s shape is not exactly like something you’d see in a cardiology textbook. But I’m going with it. 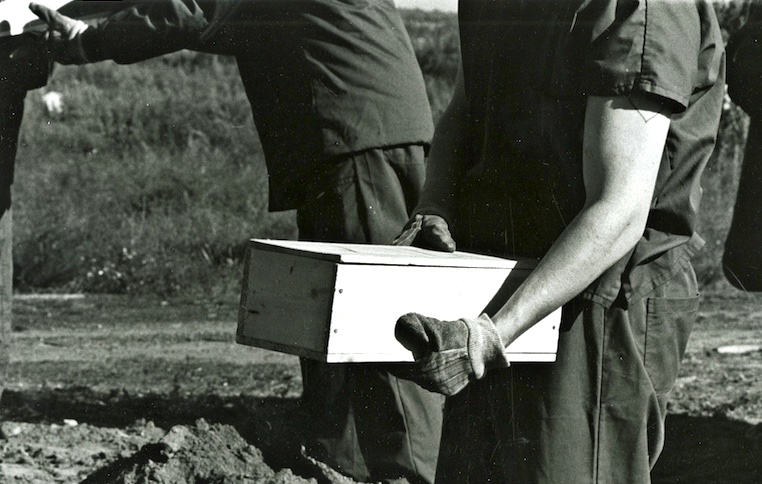 Besides being a game preserve, over the centuries, Hart Island was also, um… multi-purposed? It’s been a potter’s field since 1875, of course, but here are just a few of the many other uses the “Island of the Undesirables” has served:

In the 1960s, Phoenix House even ran a drug rehabilitation program on the island. They’d hold annual sober music festivals there (one year’s headliner was the Velvet Underground). At one point, plans were made to erect an amusement park on the island, but somehow that was never built. It’s not hard to discern why some may believe Hart Island to be haunted.

Despite the myriad uses, Hart Island seemed resigned to its destiny as a potter’s field and that’s what it is full-time now. The list of famous individuals interred on the island include:

During the 1980s, far too many of what came to be called “crack babies” died alone in hospitals or in other settings -- often diagnosed with HIV/AIDS. These unfortunate souls were frequently laid to rest on Hart Island, lined up in tiny coffins. 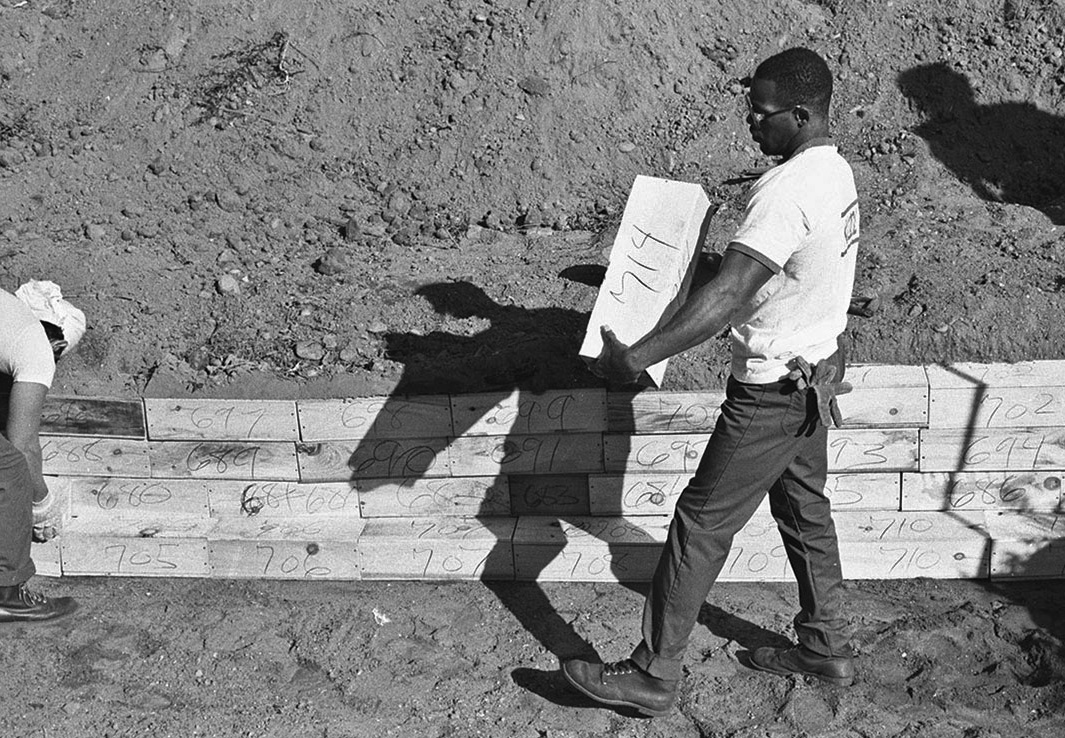 Photographer Claire Yaffa has dedicated her career to documenting the lives of the forgotten, especially children. She was granted permission in 1991 to photograph burials and some of her images are featured throughout this article.

Fear, prejudice, and paranoia helped shape the heartless response to the AIDS pandemic in the 1980s. This reality was manifest on Hart Island with inmate workers being required to wear protective outfits when handling body bags containing those who had died from AIDS. Eventually, when it was accepted that no one could “catch” AIDS from a corpse, those bodies were buried in mass graves along with all the others. You can use an interactive map here to identify AIDS victims.

In 2008, it was decided that Hart Island be used for mass burials should there be something like an extreme flu pandemic on the horizon. Some 20,000 slots were made available, just in case. Twelve years later, this advance planning would go into effect. 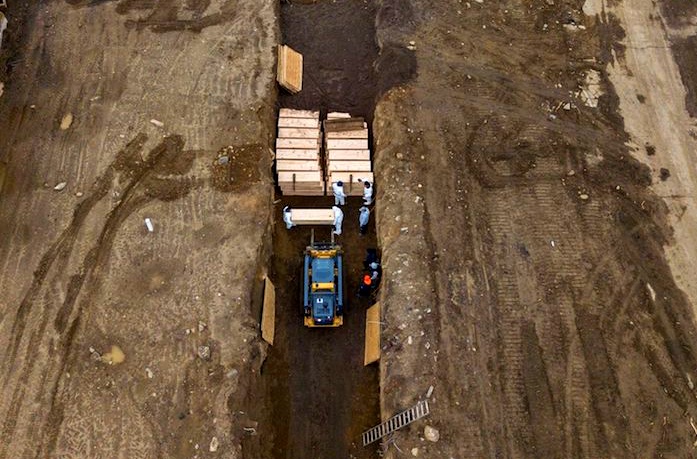 New York City was the epicenter of the COVID-19 pandemic for quite a while. Many people died alone in ICUs or at home. Mortuary capacities were overwhelmed. Bodies were stored in refrigerated trucks.

Thus, Hart Island became the site for mass burials of any of those victims who were unidentified, unclaimed, or unable to pay for a funeral. Since regular burials were also going on at this time, it’s not yet clear how many COVID-19 victims were given the island as their final resting place. Early estimates hover around 1,000.

In 1992, a Rikers Island inmate named Michael Roman was part of a work crew assigned to bury bodies on Hart Island. Roman called the location, “an island of poor unfortunate souls, buried here in the unknown to others.” He bemoaned: “If only I had the power to help this lost island.”

With that in mind, I urge you to please take another moment to peruse the images that accompany this article. Honor them and the anonymous victims they represent. Ponder how many unrealized moments, thoughts, and dreams are also buried on those 101 acres. And what about the children and all the chances they never had? Who will remember these lost souls? 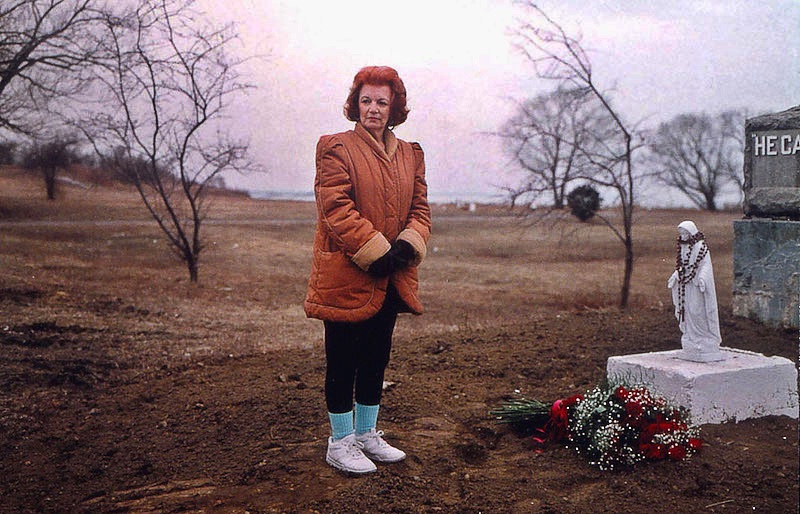 Vicki Pavia, whose baby is buried on Hart Island, on a specially arranged visit. ©1994 Joel Sternfeld

This is where the Hart Island Project comes in. Here’s a little from their mission statement:

The Hart Island Project maintains an on-line database of people buried between 1980 and present as well as maps of their grave locations. This database is the foundation for a system of storytelling and visualization called the Traveling Cloud Museum in an attempt to preserve the histories of who is buried for present and future generations. The Hart Island Project advocates for increased transparency of New York City burial procedures and assists individuals in gaining access to actual graves and information.

Click here to learn how you can help them.

Maybe you’ll feel inspired by what you’ve learned about Hart Island -- inspired not to assume you’ve got things figured out. No one ever imagines they’ll be that person who ends up buried in a plain wooden box among a pile of such boxes in a mass grave that almost no one is ever allowed to visit. But it can and it does happen, even amidst the best-laid of our futile plans.

Perhaps the best way to venerate the virtually anonymous million-plus humans laid to rest on Hart Island is not to take our own lives or the people in our lives for granted. To live today with compassion and self-compassion, because tomorrow is never guaranteed. To open our minds and listen to those we may sometimes disagree with.

There’s nothing we can do for those buried on the “Island of the Undesirables” except to remember them and mourn them. But, a bigger question remains: What are we doing right now for those who are still here among us?

As Mary Harris “Mother” Jones urged: “Pray for the dead and fight like hell for the living.”

Island of the Undesirables: AIDS, COVID-19, Confederate Prisoners, and a Million More Stories by Mickey Z. is licensed under CC BY-SA 4.0