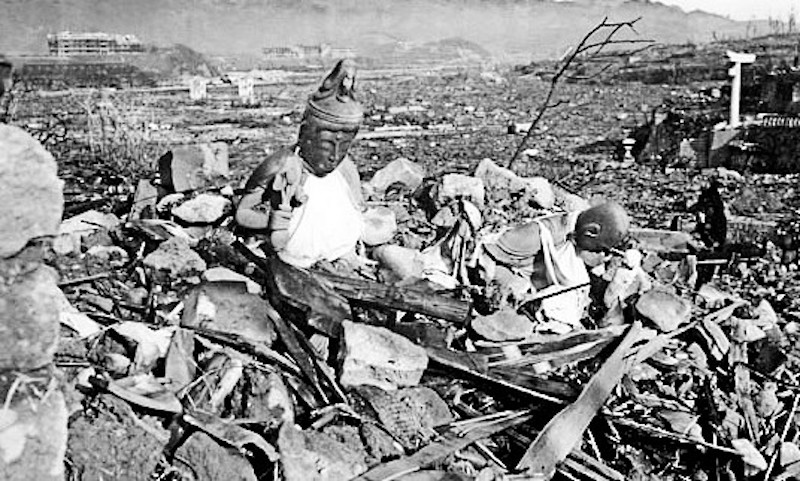 “From the very concept of strategic bombing, all the developments — night, pattern, saturation, area, indiscriminate — have led straight to Hiroshima, and Hiroshima was, and was intended to be, almost pure Schrecklichkeit [terror bombing].”

“It is an atomic bomb. It is the greatest thing in history.”

One of the seemingly endless Good [sic] War myths goes a little something like this:

The United States had no choice but to drop atomic bombs on civilians in Hiroshima and Nagasaki. Had they not done so, the fanatical Japanese would have never surrendered. Countless millions of brave American soldiers would have perished in the ensuing invasion of the Japanese islands.

As we mark the 75th anniversary of the deliberate use of nuclear weapons on civilians, I’ll try (yet again) to answer the question:

Why was the bomb used? 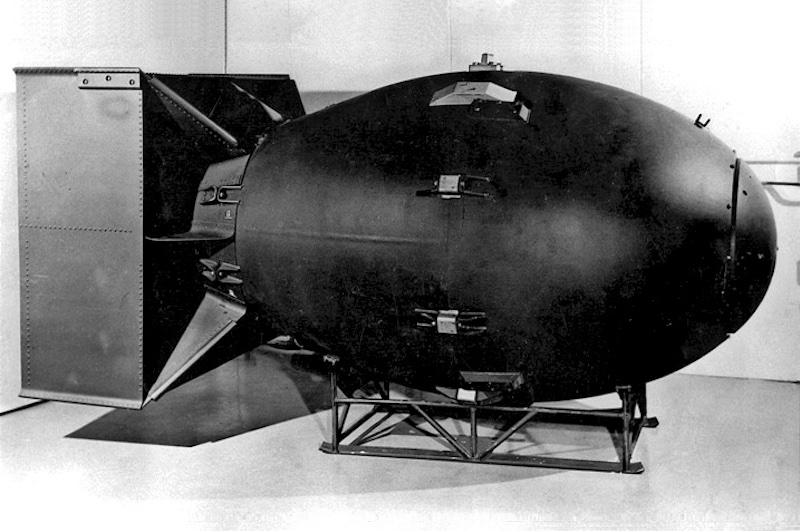 The enemy was never fascism

Before confronting the unleashing of the bomb, there is a lesser-known myth that must be dealt with: the life-and-death race with German scientists.

“Working at Los Alamos, New Mexico,” writes historian Kenneth C. Davis, “atomic scientists, many of them refugees from Hitler’s Europe, thought they were racing against Germans developing a ‘Nazi bomb.’”

Surely, if it were possible for the epitome of evil to produce such a weapon, it would be the responsibility of the good guys to beat der Führer to the plutonium punch. While such a desperate race makes for excellent melodrama, the German bomb effort appears to have fallen far short of success.

Thanks to the declassification of key documents, we now have access to “unassailable proof that the race with the Nazis was a fiction,” says Stewart Udall, who cites the work of McGeorge Bundy and Thomas Powers before adding: “According to the official history of the British Secret Intelligence Service (SIS), those agents maintained ‘contacts with scientists in neutral countries.’”

These contacts, by mid-1943, provided enough evidence to convince the SIS that the German bomb program simply did not exist.

Despite such findings, U.S. General Leslie Groves, military commander of the Manhattan Project, got permission in the fall of 1943 to begin a secret espionage mission known as Alsos (Greek for “grove,” get it?). The mission saw Groves’ men following the Allies’ armies throughout Europe with the goal of capturing German scientists involved in the manufacture of atomic weapons.

While the data uncovered by Alsos only served to reinforce the prior reports that the Third Reich was not pursuing a nuclear program, Groves was able to maintain enough of a cover-up to keep his pet project alive. In the no-holds-barred religion of anti-communism, the “Good War” enemy was never fascism. Truman’s daughter, Margaret, remarked about his early presidential efforts after the death of FDR in April 1945, “My father’s overriding concern in these first weeks was our policy towards Russia.” 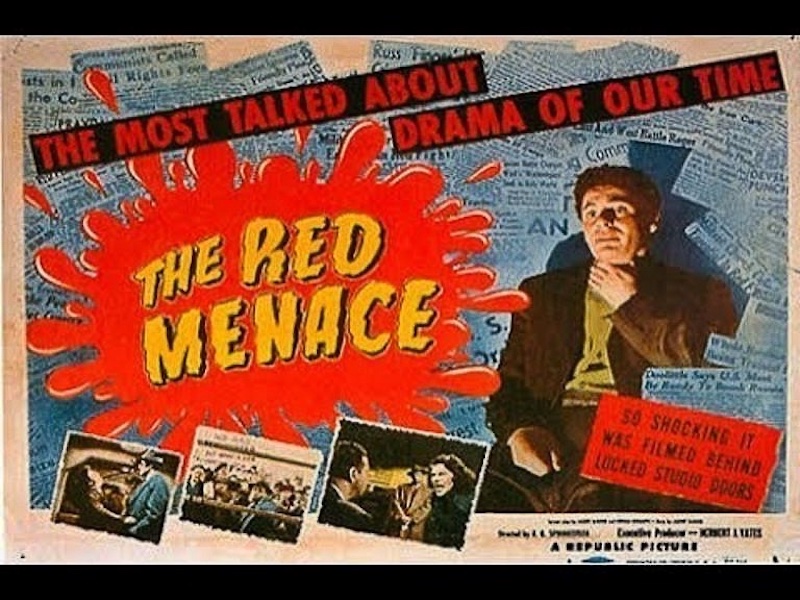 The most commonly evoked justification for the dropping of atomic bombs on Japan was to “save lives.” Let’s first acknowledge that hundreds of thousands of Japanese lives were lost in Hiroshima and Nagasaki. (The lives worth saving, of course, were American but we do know of a few U.S. soldiers who fell between the cracks. About a dozen or more American POWs were killed in Hiroshima, a truth that remained hidden for some 30 years.)

The hypothetical U.S. body count ranges from “thousands” to “millions.” In an Aug. 9, 1945 statement to “the men and women of the Manhattan Project,” President Truman declared the hope that “this new weapon will result in saving thousands of American lives.”

“The president’s initial formulation of 'thousands,' however, was clearly not his final statement on the matter, to say the least,” remarks historian Gar Alperovitz. In his book, The Decision to Use the Atomic Bomb and the Architecture of an American Myth, Alperovitz documents but a few of Truman’s public estimates throughout the years:

•December 15, 1945: “It occurred to me that a quarter of a million of the flower of our young manhood was worth a couple of Japanese cities.”

•November 1949: Truman quotes Army Chief of Staff George S. Marshall as estimating the cost of an Allied invasion of Japan to be “half a million casualties.”

•January 12, 1953: Still quoting Marshall, Truman raises the estimate to “a minimum one-quarter of a million” and maybe “as much as a million, on the American side alone, with an equal number of the enemy.”

•Finally, on April 28, 1959, Truman concluded: “the dropping of the bombs saved millions of lives.”

Fortunately, we are not operating without the benefit of official estimates.

In June 1945, Truman ordered the U.S. military to calculate the cost in American lives for a planned assault on Japan. Consequently, the Joint War Plans Committee prepared a report for the Chiefs of Staff, dated June 15, 1945, thus providing the closest thing anyone has to “accurate”: 40,000 U.S. soldiers killed, 150,000 wounded, and 3,500 missing.

While the actual casualty count remains unknowable, it was widely known at the time that Japan had been trying to surrender for months prior to the atomic bombing. A May 5, 1945, cable — intercepted and decoded by the United States — “dispelled any possible doubt that the Japanese were eager to sue for peace.”

The U.S. Strategic Bombing Survey reported shortly after the war, that Japan “in all probability” would have surrendered before the much-discussed Nov. 1, 1945, Allied invasion of the homeland.

Truman himself eloquently noted in his diary that Stalin would “be in the Jap War on Aug. 15th. Fini [sic] Japs when that comes about.” 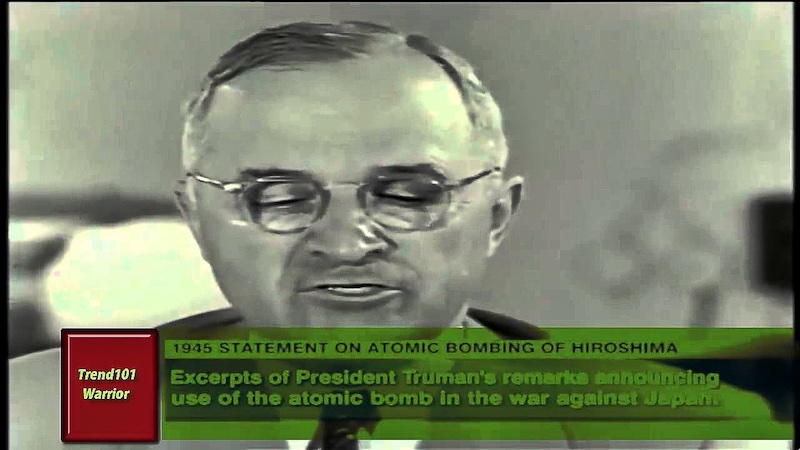 Even so, 60 percent of Hiroshima, a city with a population of roughly 343,000 -- a city Truman claimed to be a military base -- was annihilated by the “greatest thing in history” on Aug. 6, 1945. The resulting carnage was heinous.

A Tokyo radio broadcast two days after the bomb struck Hiroshima described how “the impact of the bomb was so terrific that practically all living things, human and animal, were seared to death by the tremendous heat and pressure engendered by the blast.”

Tokyo radio went on to call Hiroshima a city with corpses “too numerous to be counted … literally seared to death.” It was impossible to “distinguish between men and women.” The Associated Press carried the first eyewitness account: a Japanese soldier who described the victims as “bloated and scorched — their legs and bodies stripped of clothes and burned with a huge blister.”

Then there were the “ant-walking alligators.” This is what eyewitnesses called those who had the misfortune to survive the initial blast. One eye-witness report detailed:

“The skin had been seared from their skulls; leaving only a black, leathery substance without eyes or features. All that remained was a red hole where their mouths had once been. They staggered about the outskirts of Hiroshima, avoided by other survivors — but the real horror was the sound they made.”

In his book, Last Train to Hiroshima, Charles Pellegrino wrote: “The alligator people did not scream. Their mouths could not form the sounds. The noise they made was worse than screaming. They uttered a continuous murmur — like locusts on a midsummer night. One man, staggering on charred stumps of legs, was carrying a dead baby upside down.”

“Humanity had been forced to witness enormous destruction all through World War II,” declared Michael C.C. Adams, in The Best War Ever: America and World War II. “By 1945, the killing had reached such enormous proportions that the bombing of one more city did not have the aspect of moral horror that it might have now. In such a time of death, the unimaginable had become acceptable.”

Three days later, more of the now-acceptable unimaginable would be unleashed upon another city teeming with civilians. 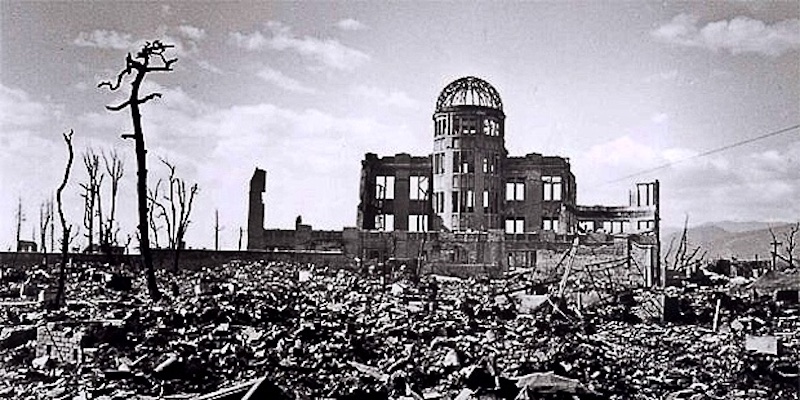 “The Butcher of Asia”

At 11 o’clock on the morning of Aug. 9, 1945, Prime Minister Kintaro Suzuki told the Japanese Cabinet that Japan’s “only alternative” was to accept the Allied peace terms and “terminate the war.”

Minutes later, the Home of the Brave™ dropped a second atomic bomb on the Japanese city of Nagasaki.

Afterward, novelist Zora Neale Hurston, called Truman a “monster,” adding, “I can think of him as nothing else but the Butcher of Asia,” and even U.S. Admiral William D. Leahy characterized the atom bombs as “an inhuman weapon to use on a people that were already defeated and ready to surrender.”

If the Hiroshima bombing was pure Schrecklichkeit, who then could explain the purpose of bombing Nagasaki three days later?

“I thought our country should avoid shocking world opinion by the use of a weapon whose employment was, I thought, no longer mandatory as a measure to save American lives,” said General Dwight D. Eisenhower.

“Was it because this was a plutonium bomb whereas the Hiroshima bomb was a uranium bomb?” asked historian Howard Zinn. “Were the dead and irradiated of Nagasaki victim of a scientific experiment?”

Perhaps it was the cold logic of the Cold War that motivated the nuking of civilians.

As far back as May 1945, a Venezuelan diplomat was reporting how Assistant Secretary of State Nelson Rockefeller “communicated to us the anxiety of the United States government about the Russian attitude.”

U.S. Secretary of State James F. Byrnes seemed to agree when he turned the anxiety up a notch by explaining how “our possessing and demonstrating the bomb would make Russia more manageable in the East ... The demonstration of the bomb might impress Russia with America’s military might.”

General Leslie Groves was less cryptic: “There was never, from about two weeks from the time I took charge of this Project, any illusion on my part but that Russia was our enemy, and the Project was conducted on that basis.”

During the same time period, President Truman noted that Secretary of War Henry Stimson was “at least as much concerned with the role of the atomic bomb in the shaping of history as in its capacity to shorten the war.”

What sort of shaping Stimson had in mind might be discerned from his Sept. 11, 1945 comment to the president: “I consider the problem of our satisfactory relations with Russia as not merely connected but as virtually dominated by the problem of the atomic bomb.”

Stimson called the bomb a “diplomatic weapon,” and duly explained that “American statesmen were eager for their country to browbeat the Russians with the bomb held rather ostentatiously on our hip.”

“The psychological effect [of Hiroshima and Nagasaki] on Stalin was twofold,” proposes historian Charles L. Mee, Jr. “The Americans had not only used a doomsday machine; they had used it when, as Stalin knew, it was not militarily necessary [emphasis added]. It was this last chilling fact that doubtless made the greatest impression on the Russians.”

It also made an impression on J. Robert Oppenheimer, the scientific director at the Los Alamos National Laboratory. After learning of the annihilation wrought upon Japan, he began to harbor second thoughts and he resigned in October 1945.

In March of the following year, Oppenheimer told Truman: “Mr. President, I have blood on my hands.”

Truman’s reply: “It’ll come out in the wash.”

Later, the president told an aide, “Don’t bring that fellow around again.” 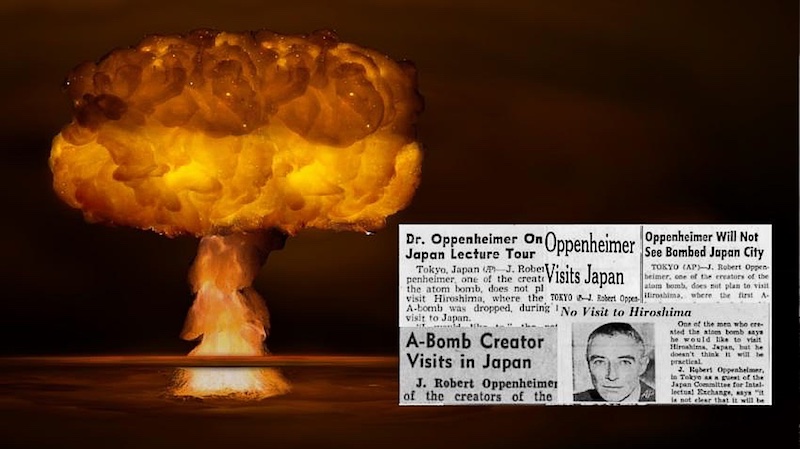 The leaders and heroes who devised and carried out America's nuclear “experiment” on Japanese civilians are generally considered to be part of this country’s "greatest generation." By any reasonable definition, what I just detailed is nuclear terrorism — a large-scale form of ongoing male violence. Versions of this violence continue to this day, 75 years later.

By relentlessly questioning and debunking the most enduring of myths, we may become better equipped to resist current propaganda and conditioning.

Hiroshima and Nagasaki: 75 Years Later by Mickey Z. is licensed under CC BY-SA 4.0