Hanging Out with Arnold at the Gym — Mickey Z. 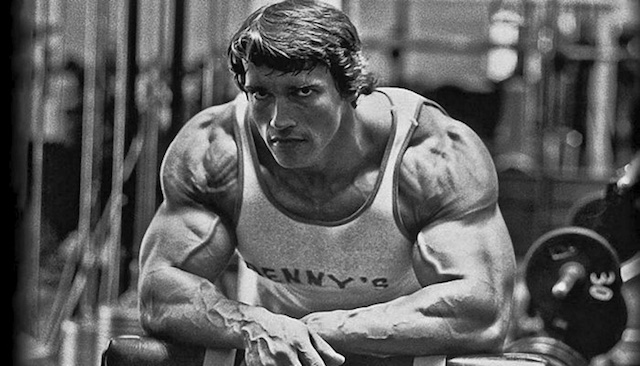 I recently told you a little about my gig at the Vertical Club (VC). Think of it as Studio 54 with bench pressing (or is that redundant?). One of the most mega of mega-stars I got to know while working there was none other than Arnold Schwarzenegger. He was nearing the peak of his Hollywood fame but remained one of the friendliest, most down-to-earth dudes you’d ever wanna meet.

Our first encounter was in the “free weight” room — where I was an institution in my pre-managerial days. The place was packed with millionaire/billionaire captains of industry but a hush suddenly took over the room when Arnold walked in, wearing a Gold’s Gym tank top. Context: Firstly, it was friggin’ Arnold. Secondly, the VC strictly enforced a rule that men must wear shirts with sleeves.

Everyone was gawking but slowly, the realization hit them that yours truly would have to tell Mr. Olympia to change into an appropriate shirt. I say this because every guy, upon first joining, ended up testing this rule and I was known for offering no exemptions (except once, but I’ll get to that soon). They had watched me enforce the rule for years — regardless of the man’s status outside the health club. All eyes were suddenly on me.

Arnold was setting up to use the calf raise rack as I approached. “Excuse me,” I began, “but we don’t allow tank tops in here.” The Terminator gave me a look as if he thought he was being punked. I smiled. “I know it’s odd,” I explained, “but you’re a long way from Gold’s.”

“I’m happy to abide by the rules and I don’t wanna get you in trouble (glance at my name tag), Mickey,” Arnold replied. “But I don’t have another shirt with me. Is there one you can lend me?” I assured my new friend that I’d find him a shirt just as a woman walked past in a skimpy jog bra. Arnold looked at her and then at me. “Tank tops are allowed for women, what can I say?”

He clasped his massive hand on my shoulder and laughed that Arnold laugh. I guided him out to the gym floor desk. As we strolled past rows and rows of Lifecycles and Stairmasters, all the jaded members perked up. They stared at the future governor of California as he walked beside me in his tank top — his right hand still on my shoulder like we were lifelong buds.

My fellow trainers were all in full jaw-hanging mode as I looked for the biggest co-worker I could find to ask him for an extra shirt. I then pointed Conan the Barbarian to a small, wall-in-closet-like space that served as our lounge/changing room. We entered, Arnold took off his tank top, and the door opened. A trainer stood in shocked silence as the shirtless muscle man gave him that toothy smile and said: “I hope you don’t mind me using your lounge.”

About 20 minutes later, Schwarzenegger was teaching his then-wife, Maria Shriver, how to use an exercise machine. However, they were doing so in an area reserved specifically for circuit training. So, once again, I had to reprimand him. We had a good laugh and he introduced me to Maria as “the guy that keeps me in line here.”

From that moment on, every time Running Man visited the gym, he would seek me out. He learned about my martial arts experience and movie aspirations and thus never failed to brief me on the fight scenes in his upcoming films. That first time we met, he was in town to promote Commando and it was pretty cool going to see that flick in Queens with some friends the next night.

Some months later, I was at the gym desk when I noticed someone waving emphatically from an exercise bike. It was Arnold… properly attired, I might add. He called me over to excitedly explain — in exquisite detail — the fight sequence he had just filmed for Raw Deal. As we spoke, my boss (Tommy D.) arrived on the scene and immediately scolded me for “bothering” the celebrity. He did so in a more light-hearted way than usual because he seemed genuinely intimidated to be in the presence of the Austrian Oak. Arnold didn’t skip a beat.

“Tommy,” he snickered, “your trainer is here giving me useful advice and you come over and interrupt him from doing his job? Shame on you!” I bit my lip to keep from laughing but Tommy left in a hurry. Schwarzenegger watched him go, winked at me, and went back to his story. 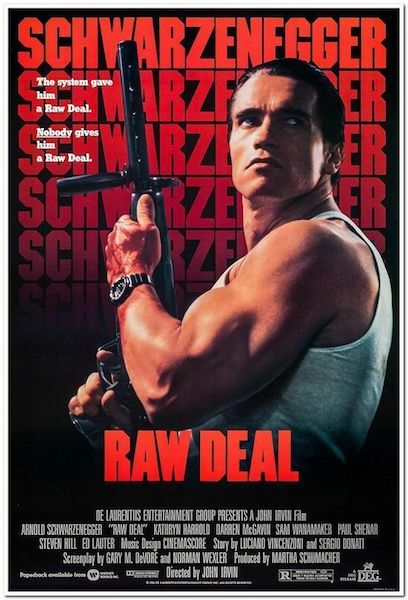 Once again, a few months passed before I saw Mr. Freeze again. This time, it was later in the evening. The crowds had died down and Tommy was already gone. So, when Arnold invited me to hang out with him while he used some machines, I was more than happy to talk about his latest blockbuster, Predator.

You see, just a few weeks prior, Jean-Claude Van Damme had visited the Vertical Club. I engaged him in conversation, telling him I was writing a script that was perfect for him. He gave me an address to which I could send it but alas, I never heard back. However, I did also ask him about the rumor that he was supposed to co-star in Predator but — for some as-yet-unreported reason — it didn’t work out. “Oh yes,” he told me, “we had bad luck with scheduling. Arnold really wanted me but I was busy when they needed me.”

Fast-Forward to me and Arnold and I got a much different version of that tale. After calling Van Damme a slur I’d rather not repeat here, Schwarzenegger explained that the martial artist couldn’t handle the Predator costume and wimped out.

“Originally,” he said, “the predator was gonna do flying kicks and shit like that. But Van Damme said he was gonna pass out from wearing the costume so we dumped him and went in a different direction.” A quick scan around the web shows that Arnold’s version is probably much closer to the truth. 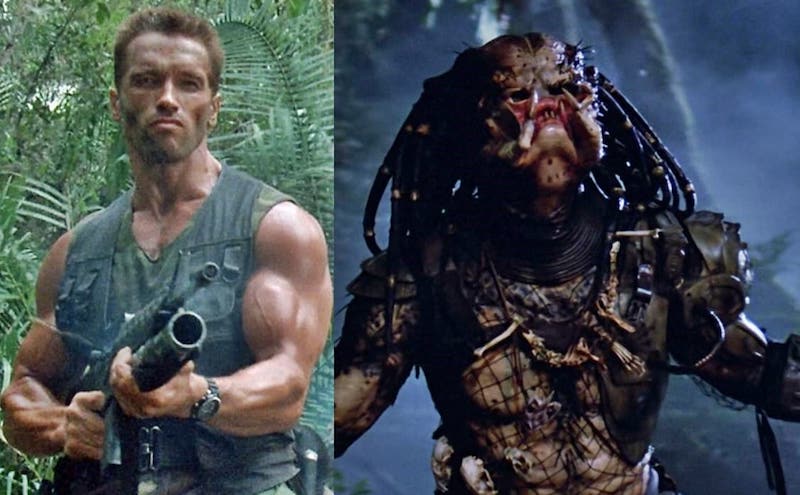 Anyway, after that fun conversation, I asked Arnold if he’d connect me with his casting people so perhaps I could work my way into his future films. He politely explained that he wasn’t in a position to do that. Thinking quickly, I came up with an excellent plan… if I say so myself.

Another recent Vertical Club guest was none other than Sly Stallone. He showed up with two enormous bodyguards, and he was wearing (of course) a tank top. One of the trainers approached him to explain the shirt policy but was cut off by the bodyguards who explained, “Under no circumstances are you to approach Mr. Stallone.”

Word of this interaction spread quickly and resulted in an all-time great VC moment. Stallone loaded up a leg press apparatus… or should I say over-loaded it? He ended up stuck under the weight, screaming for help. Not a single trainer moved to assist him and, if not for his bodyguards, Rambo might still be there today. Tommy D. later asked about this and we explained, “Under no circumstances were we to approach Mr. Stallone.”

Needless to say, I didn’t get to network with Rocky — but Arnold had no way of knowing that. So, when he turned me down, I explained: “I’m sorry if I overstepped a boundary. I thought it would be something you could do because when Sly was here, he put me in touch with his casting people.” Arnold looked at me and began some T-800 mental calculating. “Stallone was here?” he asked. I nodded yes and was instantly told to get a pen and paper. Later that night, I was mailing out my headshot, resume, and a bunch of other stuff to Hollywood. It didn’t pay off but hey, it was worth a shot. 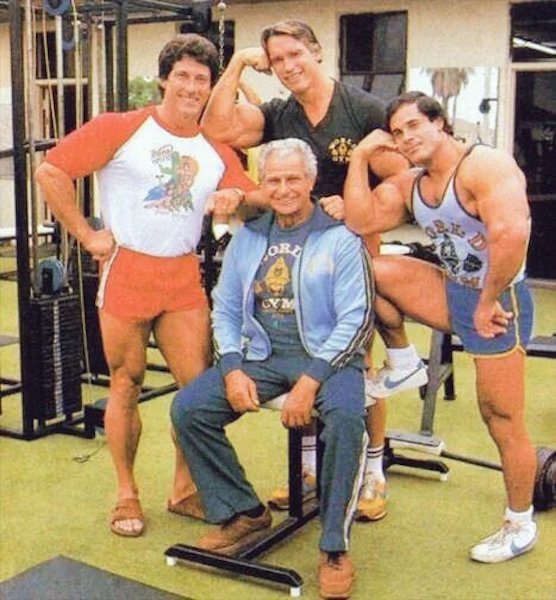 There was one more time I hung out with Arnold before I moved on from the VC. He showed up with some of his legendary friends, Frank Zane and Franco Columbu. After introducing them to me, I made sure that a few of my musclehead co-workers got a chance to also say hello to bodybuilding royalty. Later in the evening, once the other Mr. Olympias had left, Schwarzenegger was training alone. A female gym member, perhaps in her early 40s, started to follow him around.

After asking to feel his muscles (he obliged), the woman asked Arnold to work her out. Again, he obliged. She turned around and pointed to her butt. “I need to tighten up, don’t you think? Go ahead, feel it.” Once again, he obliged. From there, he put this woman through a leg routine that would’ve floored a horse. She did her best to keep up but soon gave up as Schwarzenegger told one of the trainers, “Mop her up. She’s done.” 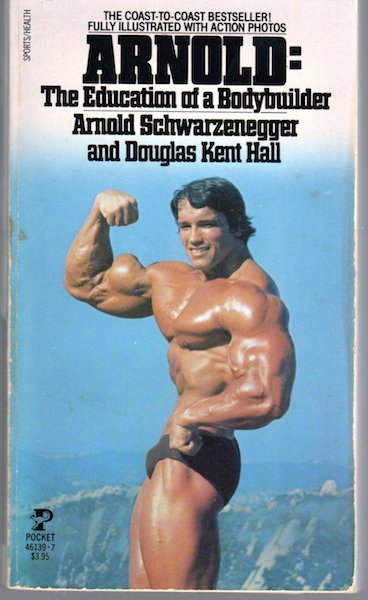 (A formative book in my earliest fitness days)

As that memorable night wrapped up, Schwarzenegger found me to say good night. I took the opportunity to ask him a question I had been pondering ever since I read his memoir, Arnold: The Education of a Bodybuilder, years earlier. In the book, he wrote that his goal was to become synonymous with fitness and exercise. “Every time someone wraps their hands around a dumbbell,” he said (paraphrased), “I want them to think to themselves: Arnold.”

I reminded him of that quote and he playfully asked, “I said that?” After making a wisecrack about ghostwriters, I continued: “Look around, almost all of these people are here working out because of you. So, I wanna know. How does it feel to set such an ambitious goal and then reach it?” Arnold rubbed his chin, glanced around the gym, and then smiled at me. “It feels good, Mick. Really good.”

I’ll never forget the wistful look in his eyes as he contemplated my question. It’s not every day you cross paths with someone who appears to have lived out their destiny — someone who found precisely what they wanted to do — what they were meant to do — and thrived in the process. It felt good then to recognize and appreciate the moment. It feels good now to recognize that you don’t have to be a global celebrity to discover your truest power and purpose. It’s never too late.