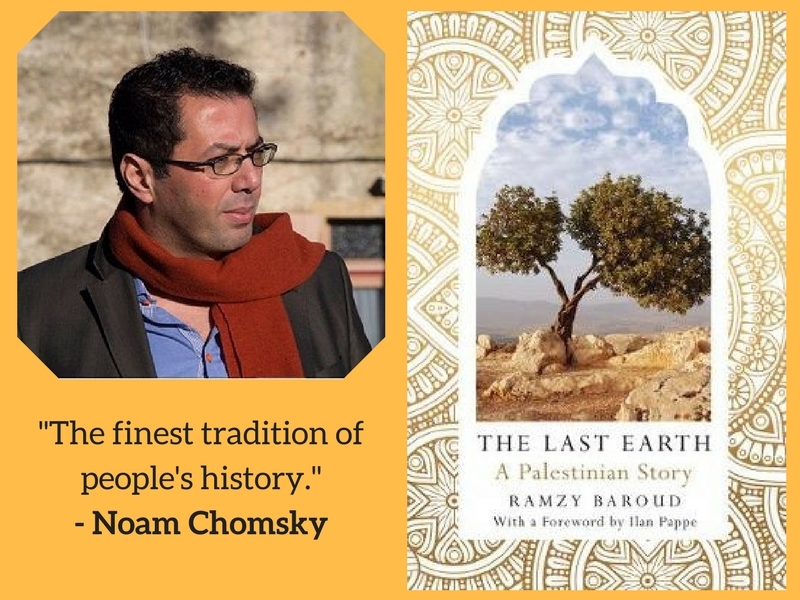 On February 20, 2018, I embarked on a global book tour that has, thus far, taken me to eight nations. The main theme of all my talks in various cultural, academic and media platforms was the pressing need to refocus the discussion on Palestine on the struggle, aspirations and history of the Palestinian people.

But, interacting with hundreds of people and being exposed to multiple media environments in both mainstream and alternative media, I also learned much about the changing political mood on Palestine in the western world.

While the nations I have visited -- the United States, Canada, the UK (England and Scotland), the Netherlands, Austria, Australia and New Zealand -- do not in any way represent all western countries, the diverse platforms that were available to me allowed me to gain a reasonably good perspective on the ideas, perceptions and attitudes of people in government, media, academia and civil society.

First, the civil society support base for Palestine is growing exponentially, not only in the number of people who are concerned with -- or interested in -- learning about Palestine, but also in the nature of that engagement as well. The detachment or sense of despair of the past, has all but completely vanished, being replaced with a proactive approach -- as in people wanted to be agents of change at local and national levels.

Second, the consensus regarding the support of the Boycott, Divestment and Sanctions (BDS) movement is constantly increasing among unions, churches, university campuses, etc. The old view that BDS was divisive and counter-productive hardly has much traction these days, and most of the remaining debates concerning BDS are not concerned with the ethics of the boycott strategy, but the nature and extent of the boycott.

Third, the degree of decisiveness in supporting Palestinians has also been heightened. The wishy-washy stances that wagered on the Israeli “peace movement" or Labor Party "doves," while condemning "extremists on both sides," has diminishing appeal.

Indeed, the successive Israeli wars on Gaza and the continued siege on the Strip have all gradually, but irreversibly, pushed the narrative on Palestine towards a whole new direction, one that has little room to wait for an Israeli awakening. The recent lethal Israeli response to Gaza’s peaceful "Great March of Return" protests has further galvanized support for Palestinians, even among relatively apolitical audiences.

Fourth, unable to push back against growing pro-Palestine movements, Israeli and pro-Israel supporters are pushing, like never before, the accusation of anti-Semitism against those who question the Israeli Occupation, use the term ‘Israeli Apartheid’ or support BDS.

While the tactic is no longer silencing the discussion on Palestine, it is creating the necessary distraction to divert attention, energy and resources to less urgent issues. A case in point is the British media’s obsession with the, supposedly, rampant anti-Semitism within the Labor Party at a time when thousands of Gazans were injured and scores killed while peacefully protesting in Gaza.

Fifth, young people are less likely to be intimidated by long-standing Israeli tactics. While the older generation of civil society leaders and activists are unwittingly beholden to the many smearing tactics used by Israel and its supporters, the younger generation is not as easily intimidated. Part of the reason is that digital media - social media, in particular - has helped younger people achieve a degree of global connectivity that has heightened their sense of unity and resolve.

The new generation of Palestinian university students and young intellectuals are also reclaiming their role in this trajectory. Their ability to connect with western societies as insiders and outsiders has helped bridge cultural and political gaps.

Sixth, while "One Democratic State Solution" ideas are yet to achieve the critical mass that could, and will, eventually push for a change in policies amongst various governments, the so-called "Two State Solution" no longer commands a dedicated following. It is almost a complete reversal from the views that permeated during my earlier world tours nearly 20 years ago.

Seven, some intellectual, and even civil society circles, are still obstructed by the erroneous thinking that the best way to convey the Palestinian viewpoint is through non-Palestinians. This belief is even championed by some Palestinians themselves (especially members of previous generations who suffered political and cultural marginalization and discrimination).

Although many anti-Zionist Jewish and Western intellectuals have been placed at the center stage to articulate a Palestinian message, the alienation of the Palestinians from their own discourse has proven costly. Despite strong and growing support for Palestine, there is still a serious deficiency in an authentic understanding of Palestine and the aspirations of the Palestinian people – their history, culture, everyday realities and viewpoints.

Needless to say, what is needed is an urgent and complete reclamation of the narrative over Palestine and the decolonization of the Palestinian discourse.

Eight, the connection between the Palestinian struggle for freedom and that of other indigenous groups is often highlighted, but much more can be done. Israeli supporters are actively pushing the misleading notion that Israelis are the "natives" of the land and are, thus, reaching out to indigenous communities around the world in search for common ground. While the reality is to the contrary, pro-Palestine groups can do much more to link the struggle of the indigenous native Palestinians with that of other indigenous and other oppressed and historically marginalized groups around the world.

A general, but equally important realization I have experienced throughout my three-month journey has been the numerous personal and group initiatives carried out by thousands of people  all over the world in solidarity with the Palestinian people: from 11-year-old Salma, who convinced all of her classmates in Perth, Australia, to write Palestine on the map in her geography class, despite knowing that they would all have been marked down for their action, to the elderly couple in Auckland, New Zealand, who, well into their 80s and walking with much difficulty, continue to hand Palestine flyers to passers-by at a busy street corner, every week, for the last 20 years.

It is these people, and millions like them, who represent the real constituency for Palestine. They are fighters in the trenches of human solidarity that neither Israel nor anyone else can possibly defeat.

- Ramzy Baroud is a journalist, author and editor of Palestine Chronicle. His forthcoming book is ‘The Last Earth: A Palestinian Story’ (Pluto Press, London). Baroud has a Ph.D. in Palestine Studies from the University of Exeter and is a Non-Resident Scholar at Orfalea Center for Global and International Studies, University of California Santa Barbara. His website is www.ramzybaroud.net.