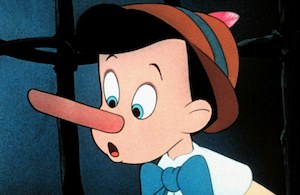 PinocchioJuly 25, 2019 (MedicalXpress) -- A consultant inflates his hours so he'll be paid more. Will his dishonesty later affect whether he'll be able to tell when his client is pleased or upset?

In a word, yes, according to a new study by four researchers, including one from Olin Business School at Washington University in St. Louis.

Dishonest deeds diminish a person's ability to read others' emotions, or "interpersonal cognition," the research found.

And here's one of the other key findings: The consequences snowball. One dishonest act can set in motion even more dishonesty.

"It can be a vicious cycle," said Ashley E. Hardin, assistant professor of organizational behavior at Olin. "Sometimes people will tell a white lie and think it's not a big deal. But a decision to be dishonest in one moment will have implications for how you interact with people subsequently."

It's no surprise that liars and cheaters can hurt the workplace, as well.

"Given the rise of group work in organizations, there's a heightened awareness of the importance of understanding others' emotions," Hardin said. Also, a person's ability to read emotions is crucial in negotiations and in building relationships.

Dishonesty has repercussions beyond harming trust and one's reputation if others become aware of it, according to the study, "The interpersonal costs of dishonesty: How dishonest behaviorreduces individuals' ability to read others' emotions," published in the Journal of Experimental Psychology: General.

Such behavior by employees is estimated to come at a $3.7 trillion cost annually worldwide. Lying and cheating is "not only is financially costly (as in the case of stealing from a company, for example, or increasing the risk of costly lawsuits) but also can harm interpersonal relationships through a particular channel: individuals' ability to detect others' emotions," even when those others are not the victims of the wrongdoing.

In all, the researchers conducted eight studies involving more than 1,500 adults to gauge lying and cheating in various scenarios. The findings support the following:

"When individuals are lacking their physiological capacity for social sensitivity, they may be more susceptible to the social distancing effects of engaging in dishonest behavior," the researchers wrote.

The findings fundamentally challenge views that lump morality and empathy into a single construct, Hardin said. Social psychology research has long argued that empathy is a moral sentiment that triggers prosocial behavior. But empathy toward others can also lead employees to cross ethical boundaries.

Consider a 2010 study by Olin's Lamar Pierce, professor of organization & strategy at Olin and associate dean for Olin-Brookings Partnership, and Gino, then at the University of North Carolina. The research was in the context of vehicle emissions. Employees helped customers with standard vehicles, as opposed to luxury cars, by illegally passing the cars on emissions tests. The results suggested that empathy toward others with a similar economic status can motivate dishonest behavior. Basically, the findings highlighted the importance of social context in ethical decision-making.

"Our work adds to this dynamic tension between dishonesty and empathy by showing … that one's empathic accuracy can be affected by the specific psychological state produced by one's dishonest behavior," the researchers wrote.