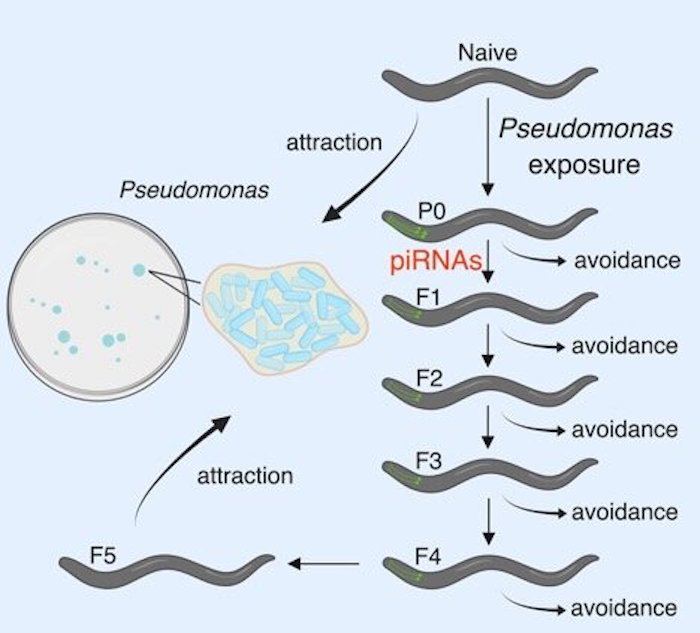 Princeton University researchers Rebecca Moore, Rachel Kaletsky and Coleen Murphy have discovered that learned behaviors can be inherited for multiple generations in C. elegans, transmitted from parent to progeny via eggs and sperm cells. C. elegans are initially attracted to pathogenic P. aeruginosa, but upon eating the bacterium and becoming ill, they learn to avoid it. C. elegans mothers (P0) pass down this aversive behavior to their progeny for four generations (F1-F4). Credit: researchers

June 6, 2019 (Phys.org) -- Princeton University researchers have discovered that learned behaviors can be inherited for multiple generations in C. elegans, transmitted from parent to progeny via eggs and sperm cells. The paper detailing this finding, by Rebecca Moore, Rachel Kaletsky and Coleen Murphy, appears in the June 13 issue of the journal Cell.

It's well known that an organism's characteristics are encoded in genes that are passed down from parent to progeny through the eggs and sperm of the germline. The inheritance of some traits is determined exclusively by whether the individual receives the dominant or recessive form of an associated gene from each parent. Other heritable traits are influenced both by genetic makeup and by factors such as nutrition, temperature or environmental stress, which can affect the expression levels of related genes. Features whose inheritance isn't driven exclusively by DNA sequence are termed "epigenetic" (the prefix "epi" means "on top of").

An organism's phenotype can change during its lifetime due to epigenetic mechanisms. For example, in the microscopic roundworm Caenorhabditis elegans, starvation or heat stress prompts animals to adapt to these conditions by varying the expression of multiple genes. At the level of the genome, these changes can be made durable by altering how tightly the DNA that encodes a gene is packed, thereby regulating its accessibility to RNA transcription machinery.

Alternatively, cells can engage mechanisms that destroy or sequester protein-coding RNA transcripts. When these modifications are made in germ cells, they can be passed down to future generations in a phenomenon is known as transgenerational epigenetic inheritance. Studies have shown that C. elegans adaptations to starvation and heat stress can be inherited for several generations. Might more complex phenotypes, such as behavioral changes, also be passed down in this way?