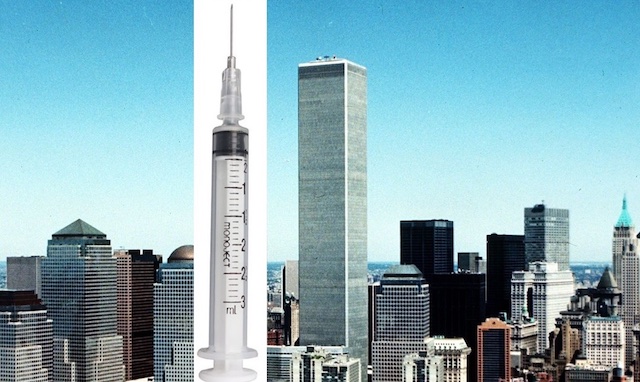 In response to the events of September 11, 2001, the emergency use authorization (EUA) concept was created. The ostensible idea was to empower the Food and Drug Administration (FDA) to allow the use of potentially life-saving products (e.g. medicines, etc.) after a terrorist attack. However, the EUA designation was not put into effect until late 2020 — for the COVID-19 “vaccines.”

The squashing of civil liberties in The Land of the Free™ is hardly a novel idea. For just a few (of endless) examples, one may recall Anti-Terrorism and Effective Death Penalty Act (1996), Espionage and Sedition Act (1917), National Defense Authorization Act (2011), or the FBI Counterintelligence Program, COINTELPRO (technically 1956-1971, but probably still going). Also, the interned Japanese-Americans in the 1940s just might have something to say about FDR's concept of “freedom.” Doling out and taking away rights is essentially a side quest for America's power elite.

A common theme of these power grabs involves exploiting a crisis. Two decades ago, the Bush-Cheney Administration used the guise of “emergency” to reshape the country’s psyche. Steps that seemed like temporary precautions are now deemed permanent and normal. These include a wide range of changes like the Transportation Security Administration, three-ounce bottles of liquid, full-body scanners, a “No Fly” list, and the completely laughable concept of taking off your shoes before going through security (soon to be rendered fully obsolete thanks to foot scanners). 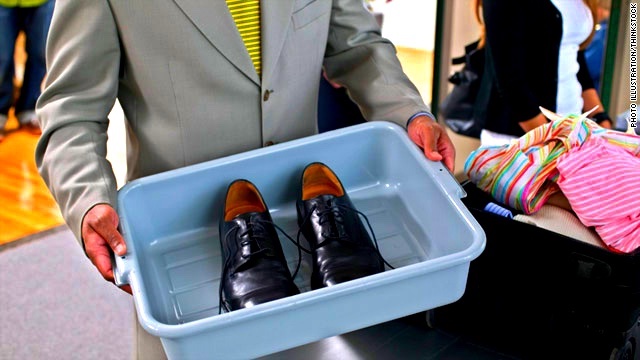 All of the above (and so much more) would’ve once seemed like details from a bad, futuristic novel. Today, they exist without comment. The powers-that-be have effectively conditioned us to accept whatever is imposed upon us. And, post-9/11, that included the “Uniting and Strengthening America by Providing Appropriate Tools Required to Intercept and Obstruct Terrorism Act,” a.k.a. the USA PATRIOT Act.

This totalitarian salvo includes what the ACLU called "a host of alarming and unconstitutional anti-speech provisions" and was been condemned by three state legislatures and almost 250 municipalities across the United States. 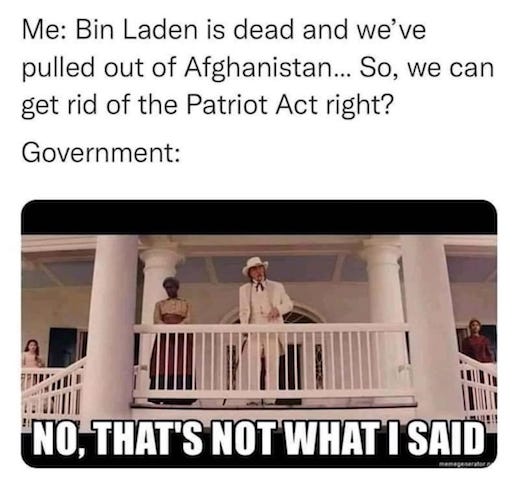 Adele Welty declared the PATRIOT Act to be “a serious threat to the exercise of our Constitutional rights." Welty's son Timothy lost his life in the WTC collapse — one of the 343 firefighters who died that day. She later testified before the New York City Council and said, in part: "[The USA PATRIOT Act] undermines our Fourth Amendment right to privacy and expands the ability of the government to use wiretaps and computer surveillance and to look at confidential medical, financial, business and educational records.”

Such talk of rights and overreach sounds quaint to today’s ears. Like the internet or cellphones, the USA PATRIOT Act is just something that’s passed down to new generations without examination, thought, or even conscious awareness. That’s part of what made it so easy for the elites to use the COVID-19 pandemic to garner even more control and wealth. 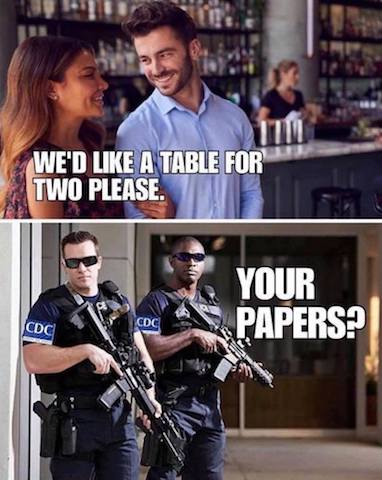 Twenty years later, we’ve come full circle to see the emergency use authorization of an experimental gene therapy being forced upon a compliant population. If you scare enough people for a long enough time, they’ll believe anything. They’ll even trust their abusers to help them. It’s trauma bonding on a macro scale.

That’s how they got us to line up in our socks for a flight. One alleged shoe bomber event happens, a frenzy is created, and Americans happily surrender rights for the illusion of safety. Today’s thugs in charge use a faulty PCR test to inflate Covid numbers, impose useless and psychologically damaging mitigation tactics like masks and distancing, and then tell us how lucky we are that they’re here to save us with a magic shot. But, if the shot doesn’t work or causes injury, you can’t sue them.

Here in New York City, we’re living under a vaccine mandate — almost 20 years to the day of 9/11. Unvaccinated adults can’t attend movies, work out at gyms, visit museums, or dine in restaurants. It’s to protect everyone, of course. Except that unjabbed children under 12 can go anywhere they want. Why? Because science, of course. To question this decree is to expose yourself as a potential domestic terrorist. But the authorities won’t have to find you. Your friends and neighbors will gladly turn you in — to protect everyone, of course. Remember: We're all in this together! (Even the ACLU is now in favor of mandates.)

Meanwhile, the majority of black and Latino adults in the Big Apple have wisely avoided the shots. Thus, this mandate is limiting the ability of People of Color to live their lives and make a living. Sounds like “structural racism” to me. Not a peep has been heard from Black Lives Matter or any other #woke organization. Some call it coincidence.

There’s a direct line from the anti-anarchist Palmer raids to the smashing of labor unions to the Red Scare to FISA to today’s demonization of anyone who questions the patently insane Covid narrative. There’s also a direct line running through all those, um, helpful citizens who gleefully support the repressive tactics imposed by a cabal of Corporate and State actors.

Unless and until everyday people break free of the programming, there will be more experimental drugs, more invasive technologies, more surveillance, more artificial intelligence, and more transhumanism. You’ll never stop lining up to be scanned, injected, genetically modified, and “enhanced.” There is only one hope and one path away from this dystopian future vision: rediscover the subversive of thinking for yourself.