Chomsky: Trump Is A 'Sociopathic Megalomaniac' Who Made US 'Singularly Unprepared' For Pandemic 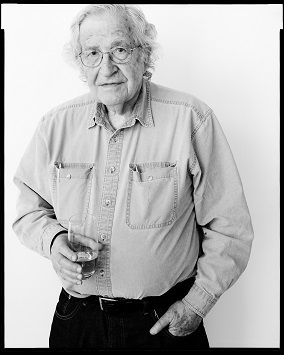 Chomsky's fresh criticism of the president came in an interview with Agence France-Presse published Monday.

"The White House," said Chomsky, "is in the hands of a sociopathic megalomaniac who's interested in nothing but his own power, electoral prospects."

Trump "doesn't care what happens to the country, the world," though he's still reliant on "his primary constituency, which is great wealth and corporate power," Chomsky said.

The administration has "no coordinated plan" for addressing the pandemic, meaning the nation will see "a lot more" deaths from Covid-19 on top of the nearly 100,000 confirmed fatalities that have already occurred, he added.

Setting the stage for the current situation is that Trump kicked off his administration by moving to take apart "the entire pandemic prevention machinery," including by "canceling programs that were working with Chinese scientists to identify potential viruses," Chomsky said.

Another contributing factor to the flawed response, said Chomsky, is that the nation is "in the stranglehold of private control," an example of which is the lack of a national single-payer healthcare system. "It's the ultimate neoliberal system, actually," he said.

While Chomsky predicted a recovery from the pandemic will come eventually and "at severe cost," the same cannot be said of the climate crisis. "There isn't going to be any recovery from the melting of the polar ice caps and the rising of sea levels," he warned.

In an interview earlier this month with the Guardian, Chomsky was asked if Trump was "culpable in deaths of Americans."

"Yes," responded, "but it's much worse than that, because the same is true internationally. To try and cover up his criminal attacks against the American people, which have been going on all of this time, he's flailing about to try and find scapegoats."

Chomsky also recently took aim at Trump's policies that are worsening the climate crisis, telling Canada's National Observer last month that the U.S. president "wants to destroy the prospects for all organized human life. And in the near future. That's what it means to maximize the use of fossil fuels, to cut regulations that might diminish or restrict that danger."

But as bad as Trump is, Chomsky noted that the groundwork was laid well before the failed business owner walked into the Oval Office. In an April interview with Democracy Now!, Chomsky said:

"Trump is taking a failing, lethal system and turning it into a monstrosity, but the roots were before him. Just think back to the reason why the pandemic occurred in the first place. Drug companies are following capitalist logic. They don't want to do anything. The neoliberal hammer says the government can't do anything the way it did in the past. You're caught in a vise. Then comes along Trump and makes it incomparably worse. But the roots of the crisis are pre-Trump.

"The same with the healthcare system. Like we know that -- everyone knows -- they should know the basic facts. It's an international scandal: twice the costs of comparable countries, some of the worst outcomes. The costs were recently estimated by a study in The Lancet, one of the world's leading medical journals. They estimated that the costs, the annual -- annual costs to Americans are close to half a trillion dollars and 68,000 lives lost. That's not so small."

Going forward, Chomsky suggested there are lessons to be learned from the coronavirus crisis.