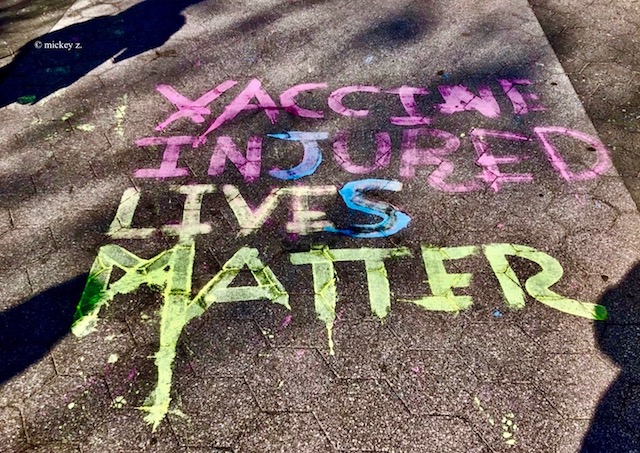 Take a good look at the photo above. It reads “Vaccine-Injured Lives Matter” and it was chalked onto the ground at Union Square Park on March 20, 2021. I was in the area with a friend to see what the “World Freedom Rally” looked like. We encountered the chalk graffiti, I took the picture, and then immediately asked myself this question: How much heat would I face if I "dared" to share this image on Facebook?

Since many of my Facebook friends are left-of-center (a.k.a. #woke), I knew that the simple act of posting a photo that resonated with me would be “controversial.” Here are two of the main reasons why:

1. The Vaccine Police™ would be out in full force. In the past year or so, large swaths of humans have appointed themselves to be volunteer guardians of “science.” My Facebook page is a pretty quiet venue — except, for example, when I point out undeniable truths like:

For committing the transgression of posting facts, you will be labeled “anti-vaxxer” or “anti-science” or a “conspiracy theorist” and publicly mocked. In some cases, you’ll be un-friended without any explanation. In WokeWorld, disagreement is not permissible.

2. No one is “allowed” to use the phrase “lives matter” unless the word “Black” appears somewhere before it. It could be “Black Girls” or “Black Trans” or something like that. Anything else will be censored and censured by the cancel culture guillotine of the “Left.” You will be un-ironically deemed a white supremacist because, well… in a hive mind, it’s all or nothing. “Vaccine-Injured Lives Matter?” That’s a double whammy. You’ll be subjected to ad hominem attacks from the same smug, anti-free speech crowd that once promised a return to civility after the fall of Trump. Last year at this time we were living through Compassion Theater™. Every life counts. We are all in this together. Stay safe. Today, try questioning the accepted dogma and see how much kindness and positive energy you garner. 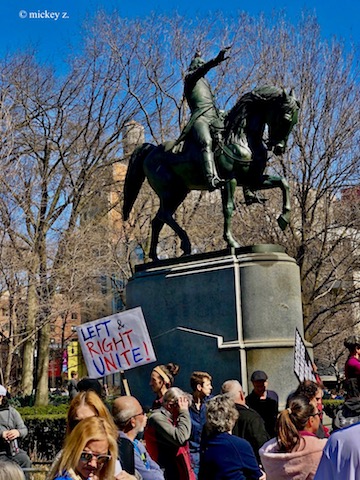 This puts someone like me in an unusual position. I was once a well-known character on the “Left” but I no longer vibe with their thought-police mentality. That crowd also hates being called out — especially by a former comrade. The compassionate (sic) woke-sters will relentlessly try to squash anyone’s freedom to practice independent thought. At the same time, I’ve got virtually nothing in common with the “Right.” They don’t even know I’m alive and even if they did, I wouldn’t want the added drama of having them stick up for me.

When faced with a rock-and-a-hard-place situation like this, my typical reflex is to self-censor. It’s just not worth it, I tell myself. Pick your battles. You’ll just stress yourself out, lose friends, and nobody will change their mind anyway. I’ve been a radical writer and public speaker for decades and I’ve seen this play out plenty of times. Let it go and live in peace, right? Pretty decent, self-loving advice, but… living in peace is not possible when you allow the will of the mob to control even your most minor decisions. Therefore, since there was a chance Facebook might’ve banned the photo anyway, I decided to instead write this article about the graffiti, the series of thoughts it inspired, and the sad state of things in 2021.

Take-home messages: You don’t have to march in lockstep with the algorithm-driven denizens of the Left or the Right. Do your homework. Make up your own mind. Don’t surrender to dangerous echo chambers. Plant your flag and see who comes to stand with you. Most of all: It’s time to rediscover the subversive pleasure of thinking for yourself.

Mickey Z. can be found here. He is also the founder of Helping Homeless Women - NYC, offering direct relief to women on New York City streets. To help him grow this project, CLICK HERE and make a donation right now. And please spread the word!