BOOKS: The Balfour Declaration -- The Origins of the Arab-Israeli Conflict. By Jonathan Schneer | Jim Miles 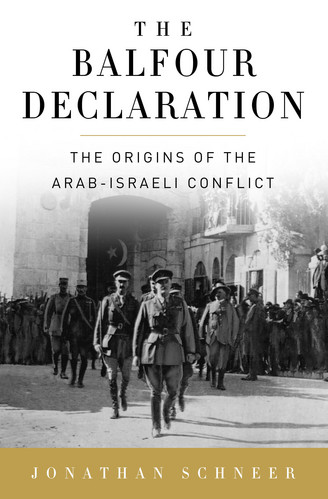 Apr. 2, 2012 (Palestine Chronicle) -- This is the best that academic political history gets.

More than simply the dates and the ‘facts’, Jonathan Schneer is able to give some personality to the characters involved, including the all-too-human factors of lying, deceit, and manipulation that many political histories miss. The title, given to the letter that carried the name, The Balfour Declaration covers all the actors in the scene from the European empires, the Ottoman empire, the European Zionists, and the Arab politicians of the Middle East.

Lord Balfour himself certainly played a large part in the affairs of the world during that epoch, but the declaration itself owes its existence to these many other players and their machinations within the destructive chaos of World War I.

The cynicism, manipulation, and backstabbing is clear throughout the history. Before the Arabs joined in hostilities directed at the Turks, Egyptian High Commissioner Henry McMahon stated, “we have to ... tempt the Arab people into the right path, detach them form the enemy and bring them on to our side. This on our part is at present largely a matter of words ... we must use persuasive terms and abstain from academic haggling over conditions.” In a later comment in the work, Schneer says these “telegrams ... inadvertently revealed the hopes, contradictions, tensions, guile, and prejudices now at work in shaping British and Allied wartime policy toward both the Jews and Arabs.”

The history rests on these manipulations and “nebulous” proposals. The British wanted the Arabs on their side; they also wanted control of Palestine and Mesopotamia (Basra, Baghdad, Mosul). The French also wanted a share of the same region (mostly Syria, a largely undefined region at the time), and Britain wanted to limit their influence. The Arabs of course wanted their own governance out from under the Ottoman Turkish rule; they were willing to allow a very limited British and French presence, at the same time knowing they needed their military assistance to get rid of the Turkish military. There were early signs “of the incomprehension with which some important Britons initially pursued two mutually exclusive policies,” from which as is generally the case, no one is satisfied.

The Jewish people were divided significantly between “assimilationists” -- those thinking that assimilation and remaining as a Britain who is a Jew as compared to a Jew who happens to be in Britain -- and the “nationalists,” Zionists who worked for their own national state in Palestine. The British and the French overestimated the power of Jewish political influence and played this misguided feature (as did the Jews) to help in their victory over Germany, the Turks, and for Jewish support at home.

The first idea is demographics, always a concern for the Jewish population in Palestine/Israel. The many comments of later Zionists about needing a majority in the land (which contradicts any claims of a land without people) was understood by the very early Zionists. Already looking to the future, the Earl of Crewe (Asquith’s secretary in India) noted from the British side, “when in the course of time the Jewish colonists in Palestine grow strong enough to cope with the Arab population they may be allowed to take the management of the internal affairs of Palestine ... into their own hands.” As Schneer commented, “Weizmann could have asked for little more.”

Another concept carried forward and still emphasized today is that of Jewish superiority over the Arabs in all aspects. Asher Ginzberg noted, “We are used to thinking of the Arabs as primitive men of the desert, as a donkey-like nature that neither sees nor understands what is going on around it,” and ends with a warning, “But that is a great error.” He further warned against the “ ‘repressive cruelty’ employed by Zionists in their dealings with Arabs,” in 1891, well before events of WW I and the current repression in Palestine.

Judaism is seen as being divided into halve and then into quarters. As noted above, there were (and are) assimilationist and nationalist Jews, and within the latter, the home of the Zionists, there exists “cultural” Zionists, and “political” Zionists.

In Judaism in general there is the struggle between existing as a diaspora, working with the “liberal tolerant creed of Judaism,” and against “the necessity and eternity of war.” Cultural Judaism (and cultural Zionism) look on Judaism as “an ethos and approach to life,” rather than a dispersed nation state. The political Zionists emphasize the need for military strength within a nation state -- this latter viewpoint gained huge currency after World War II and has become one of the main fallback arguments as to the reason why the current state of Israel is acting the way it is.

The nationalist Zionists won the argument, not necessarily by force of logic or emotion, but through the political manipulations within Britain and France, remaining ignorant by design of the promises made between Britain and France and Britain and the Arabs concerning the Middle East and Palestine.

Palestine and the Balfour Declaration

Another factor that comes through by implication and repetition is that the concept of Palestine as a separate Arab state is not a new idea, not an idea that came into being after the nakba of 1948, not an invented idea. It is a concept, a stated reality within the negotiations taking place throughout this period of time.

One of the more disconcerting features of the Balfour Declaration is its apparent acceptance as legal entitlement for the state of Israel. There is no validity to it being considered an internationally legal document supporting Israel. In political reality, it was essentially a statement, a “declaration” that Britain supported and would assist with the establishment of a Jewish home in the region. Even then, it was according to Schneer almost overcome by other then current negotiations with the French and the Arabs in the region, negotiations kept hidden from the Zionists, including the lead protagonist in the story, Chaim Weizmann.

Schneer presents the many arguments concerning the wording and intent of the Declaration, essentially indicating that it was a political statement to gain favour with Jews and pre-empt any such statement of a Jewish homeland coming from the United States or Germany. Edwin Montagu argued at the time that “Palestine will become the world’s Ghetto,” perhaps more correct than he anticipated in regards to the Palestinians themselves.

"Because it was unpredictable and characterized by contradictions, deceptions, misinterpretations, and wishful thinking, the lead-up to the Balfour Declaration sowed dragon’s teeth.. It produced a murderous harvest, and we go on harvesting even today.”

"During World War I ... Britain and her allies slew the Ottoman dragon in the Middle East. By their policies they sowed dragon’s teeth, Armed men rose up from the ground. They are rising still."

This is an excellent historical work, but it is dealing with a complex time and a complex issue with many undercurrents and counter currents to the mainstream of history that is usually understood for the First World War, its causes and its consequences.

To gain a strong view of the events before during and after WW I, other reading material will give a broader more detailed outline and make The Balfour Declaration by Schneer easier to follow. To gain a good overview, Barbara Tuchman’s Guns of August (Random House, 1994) provides an excellent history of events before the war, and how the same features of deception and guile, of patriotic beliefs in empire, created a situation only needing a spark to set it off. For the period immediately after the war, when grand sounding rhetoric turned out to be the same old imperialist hype, Margaret MacMillan’s Paris 1919 (Random House 2003) is an excellent work. The events of the war itself are generally well covered by many historical works, although often without the insight that Tuchman or MacMillan provide into the underlying human errors and ignorance that breeds war. For more background on the current situation in Palestine/Israel, one of the best works covering the post Second World War period is Ilan Pappe’s The Ethnic Cleansing of Palestine, (Oneworld Publications, 2007).

These four works combined will give the reader an excellent understanding of the roots of the current situation in Palestine/Israel. They reveal much that is not written in the standard history texts, of the standard military autobiographies written for the grandeur of the winning more powerful side.