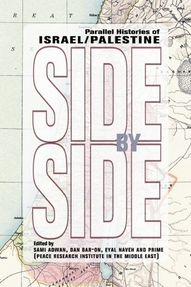 Apr 22, 2012 (Palestinian Chronicle) -- This is an intriguing work of historical writing. For the parameters that it has set itself, it succeeds.

It is written as would be expected with both sides choosing their words carefully as descriptive words and active verbs can influence the perceptions of the reader. It is a good primer text for the situation in Palestine/Israel, but there is much more material that can extend both these narratives by providing much more detail and more importantly, more context.

In an issue as critical as this, where the choice of words, perhaps the choice of a definitive article (the) can shape the course of events, the choice of title is perhaps equally important. Did the editors purposely choose the title word parallel in order to indicate that these two stories lie side by side but will never meet? Or was it more a choice indicating that the stories have a long storied past and will continue to have a long storied future? Both?

More correctly, having read many dozens of books on both sides of the issue, the story lines presented here are not truly parallel, never meeting, but could be much more accurately described as tessellated, or more commonly, presented as a jig saw puzzle. The information presented in both stories is not aggressive, it is not challenging, there are no contradictions (perhaps the colouring of perceptions as mentioned above as one man’s freedom fighter is another man’s terrorist), no antagonism, no confrontation.

The two stories are highly complementary and could be melded together, fitted together in a tessellation -- shaped brick work to make a single sidewalk -- or more fittingly, the irregular shapes of a jig saw puzzle that when arranged correctly form a single picture. It might be difficult for someone new to this information to see how they can be fit into a whole, but the writing has been carefully enough worded that each narrative can fit within -- can fulfill -- the other.

In the introduction the editors say,

"In intractable conflicts, each side creates a monolithic identity by constructing it in opposition to the “other.” Historical facts are recruited to support the narratives associated with these monolithic constructions."

This is true during conflict and after conflict, as it is generally the most powerful, and ultimately the winners who write the narrative. Winners of course do not have to worry too much about facts and can colour their language as they please, ensuring that future generations will read of the glory of long ago battles fought for justice and freedom against “others.” Fortunately, these two narratives appear to be very cognizant of this and have been much more circumspect with their choice of language.

However, to concentrate on the phrase historical facts are recruited creates a slightly different nuance to these complementary texts. As the reader goes from one story line to the other, it is consistently the Palestinian line that has recruited more facts. As indicated earlier, there is nothing antagonistic or contradictory between the two stories, but there are certainly more errors of omission. I am left with the feeling that it is perhaps inconvenient for the Israeli narrative to recruit certain facts. Thus the two stories become fully complementary as the missing facts are generally provided by the longer more detailed Palestinian narrative.

Familiar to all who have read histories of Zionism and Palestine/Israel, one major common thread becomes the demographic concerns of Israel as made practical by the settlements. This is not a new phenomenon since the Six Day War, but is the warp and woof within the overall Zionist-Palestinian historical tapestry.

Settlements are mentioned frequently in both narratives. The Israel side indicates the need for settlements in order to gain territory and to increase the Jewish population. The Palestinian side indicates the same in terms of loss of territory, livelihood, water, resources, and transportation.

The settlement issue starts with Practical Zionism in the 1920s “focused on ... purchasing land and settling Jews in the Land of Israel.” This focus is repeated, as “Settlements and demographic expansion ... were the most important practical manifestations of the renascent Jewish nationalism.” Continuing, during the 1930s the main aim of the accelerated settlement was to expand Jewish areas in preparation for future partition ... on the assumption that the location of settlements would determine the new borders. The settlement model was called “tower and stockade” because these settlements were set up and populated overnight, with a wall around them and a watchtower for defense.

This is surprisingly reminiscent of the U.S. settlement patterns as they ethnically cleansed the native people from across the North American continent. Not all were necessarily military, but the military role is obvious.

Later in the 1940s, “New settlement activity created territorial continuity and enlarged the area of future Jewish state in the event of partition.” The comments continue similar to this, always with the emphasis on colonizing the land, settling the land, with territorial continuity and demographic majority being the end goal. All this was written from the Israeli perspective, a significantly honest approach to the history of Palestine/Israel.

There are three large errors of omission within the texts. The first is the lack of any acknowledgement of Israel’s dominant military strength back-stopped by its nuclear arsenal. The second is the broader context of Palestine/Israel within the current imperial adventures in the region. The third is that the narrative stops in 2001.

Israel has by all authoritative accounts a large nuclear arsenal and one of the most powerful military and security forces in the world. That omission is one that distorts the balance of the narratives, as there is no balance when one side has all the military fire power, all the coercive power.

The broader context is somewhat recognized by the Palestinian writers, as they recognize the supporting role that the United States gives to Israel. But beyond that, both sides leave out the huge financial, military, and technological assistance provided by the United States to Israel, and the overwhelming political support provided by the United States in foreign affairs in the latter’s efforts to be the controlling hegemon of the Middle East. Once again, historical writing cannot be balanced when one side is overwhelmingly dominant compared with the other.

When I came to the end of the stories I was surprised that the end came in 2001. With a book published for 2012, there have been major incidents after that date that are not addressed. The thwarted democratic elections of 2006 in the occupied territories, the invasion of Lebanon in that same year, the Cast Lead invasion of Gaza, the U.S. invasion of Iraq on the second stage of its war on terror after the Twin Towers attack of 2001 that started the current U.S. military grab for world dominance -- are all significant events that have been omitted. Associated with that of course are the final dying phases of the peace talks, and the ongoing settlement and wall building functions of practical Zionism.

Perhaps the editors/authors recognized that this might be territory where the non-antagonistic nature of the narratives might be disrupted; or perhaps the last ten years do not count as "historical" in spite of their huge significance.

Overall the honesty and candour of the writing is refreshing and holds up to its initial premise of being historically accurate even if one-sided. From the Israeli side, while the holocaust is mentioned as it necessarily needs to be, it does not become the fall back position of a national mythology of the perpetual victim. Certainly the Jewish people of all races have been persecuted, but they are not unique in that, and progress will be made not by being constantly the victim, but by learning from the holocaust and ensuring that no other people will suffer a similar fate in the future, but that justice and equality shall prevail for all. On a smaller scale, the writers acknowledge the more significant strength of the Israeli military during the war of independence.

Yes, you know how to read, but this text does pose some problems. I found that trying to read the pages side by side became confusing as well as disruptive to the individual story lines. Conversely, I thought that by reading the whole text from one perspective first would possibly make me forget some of the comparisons that are apparent. I settled on reading the story line one chapter at a time, one side at a time. This enabled the comparisons to be readily made without disrupting the storyline, and without forgetting what the other side had said from their perspective about that particular period.

This book is well worth the read for its honesty and not-so-parallel approach to the stories. The lives of the Israelis and Palestinians are indeed intertwined, and while they may try to carry two narratives, this honest examination of both demonstrates that they are part of a whole, not equal, but all fitting into one singular series of historical events.