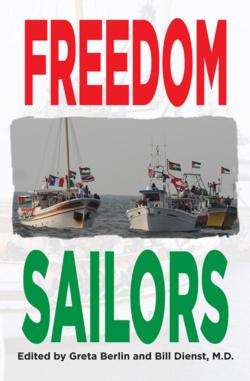 Aug. 29, 2012 (Palestine Chronicle) -- It is difficult to imagine the thoughts and feelings of the people who are forcing the hypocrisy and lies of the Israeli government out into the open by sailing small boats through international waters to Gaza.

Freedom Sailors is a collection of anecdotal recollections of the first and ultimately successful attempt by two small boats to break the siege, the S. S. Liberty and S. S. Free Gaza.

The commentaries, while outlining the sequence of events, provide a clear view into the fears and hopes before and during the voyage. It also presents the strength of commitment of the participants while under both emotional and physical stress. The simple stresses of travel and delayed dates and times are common to most travellers. Add to that the necessary secrecy and purposeful ignorance of all events, the latent fears of Israeli agents attacking either the boats or the people involved, the stresses of committing to time frame that, while somewhat scheduled, is prone to delays. Financial difficulties cause further frustrations and anxieties. Finally, the voyage itself carries the fear of Israeli military interception with unknown results -- death, drowning, incarceration in Israeli jails -- as well as the physical pain of seasickness, and the discomforting vagaries of the weather.

For all that, the participants proceed, and succeed, supported by a large land crew and many supporters around the world. Of particular note is the response of the Greeks and Cypriots who were more than willing to spend extra time and effort in supporting a cause that they believed as right and just.

It is a heroic tale simply written. Heroic not because the people involved are larger than life and great public figures, but because of the opposite. The participants are everyday people, perhaps with more personal gusto and drive than average people, but none the less are everyday citizens demonstrating possibilities against the siege imposed on Gaza by the Israeli military.

A few of the commentaries provide more context to the situation in Gaza.

Donna Wallach describes succinctly the effects of the occupation and blockade, the collective punishment of the Palestinians in Gaza. She makes note of the malnutrition, especially critical for the young, of the agricultural land restrictions due to Israeli military interventions, the lack of clean water, and the lack of proper schooling -- again a critical lack in the lives of the young Palestinians. Ultimately, she says “ The deadly siege of Gaza Strip is 21st century slow-motion genocide.”

Lauren Booth decries the description of Gaza as an open air prison. She notes instead that compared to British prisons, the Gazans have far less food of far less nutritional value. She notes that health care is severely lacking, partly to do with the poor nutrition, but combined with the lack of supplies for medical interventions. Gaza is “No natural disaster. This is a deliberate man-made malnutrition.”

Booth makes other comments about family visitation denial, the lack of fuel for cooking and electricity, and the divisive and non-democratic laws concerning marriage and residence. From her observations she concludes that according to best definitions, that “Gaza 2008 is not a prison. It is the largest internment camp, and is slowly becoming the largest concentration camp, in history.”

Jeff Halper, one of the more recognizable figures within the group, presents a more political perspective in his discussion of what the trip signifies. He essentially covers two areas: the ideas of occupation; and the ideas of peace partners. After the success of the mission, Halper says, “Israel is either an occupying power accountable for its actions and policies or Palestinians have every right to enjoy their human right of travelling freely in and out of their country.”

As for peace, he recognizes that it is not the Palestinians that are unwilling peace partners, but that the Jews are the unwilling peace partners: “we Israeli Jews are the problem. The Palestinians years ago accepted our existence in the country as a people and are willing to accept ANY [emphasis in original] solution. It is us who want exclusivity over the land of Israel; it is us who cannot conceive of a single country, who cannot accept the national presence of Palestinians…and who have eliminated by our settlements even the possibility of the two-state solution in which we take 80 percent of the land.”

A concluding analysis of why the naval blockade and the murder of Palestinian fishermen over the years relates to the gas fields found in Gazan and international waters. With Israel very short of its own energy sources, it is trying to achieve a “no go zone” enforced by guns in order that it can control the resources of the sea bed.

The people of Gaza gathered in huge numbers to welcome the two small boats as they arrived. While the boats brought in a nominal amount of medical supplies, their main cargo was their spirit -- the spirit of hope. “They brought enough hope for over 1.5 million people who live under the blockade that someday we would be free.”

Palestinians in Gaza have suffered enormously under the naval blockade and its accompanying aerial and land blockades of the small strip of land. It may not be occupied but for all truth and reality is fully controlled by Israel. This short account of the Freedom Sailors adds full significance to the responsibility of the Israelis to the terrible conditions of life within Gaza; at the same time it highlights the all too human heroics of everyday people wishing to aid and assist their fellow man in a situation well beyond their control - and yet will defy the odds to make their basic statement about the inhumanity of the Gazan situation.

Jim Miles is a Canadian educator and a regular contributor/columnist of opinion pieces and book reviews for The Palestine Chronicle. Miles' work is also presented globally through World News Trust, and other alternative websites and news publications.