BOOKS: A World Without Islam. By E. Fuller (Jim Miles) 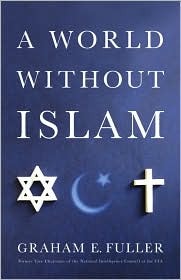 Feb. 1,  2011 (Palestine Chronicle) -- A title for a book is frequently the set of few words that creates a significant first impression and attracts the purchasers’/readers’ eye in to give more consideration to the work.

Fuller’s “A World Without Islam” is an intriguingly successful work, relying in part on an initial attraction to the word Islam, and then to the connotation of a world without Islam. My first thought was that it might be an ill-considered argument by some right wing media pundit looking for their position in the spotlight by denouncing Islam and how good the world would be without it. It was that reaction prompting my extraction of the work from among the dozens on the bookshelf, hoping to find something that I could delve into and find out what kind of arrogant arguments could be made to support that supposition.

As it soon became apparent, the intent of the title was not to see how the world would be if Islam had never existed, rather the intent was more subtle, to examine east-west antagonisms and consider if they would still exist without the Islamic influence. The simple answer is, yes, “we would expect violent reaction from most cultures under similarly stressful or violent conditions.” Even more simply stated on the final page, “a world without Islam does not markedly change the nature of things.”

Another way to put it is that antagonisms between east and west developed over millennia of interactions as different peoples passed over and conquered the lands between Europe and Asia. These interactions occurred well before the advent of Islam, with Islam only being a latecomer as the vehicle for the reactions and not the cause of the reactions -- at least until recent times and the advent of “with us or against us” crusade rhetoric from the Bush government.

The author draws parallels with the other monotheistic religions in consideration of their political use, the varying interpretations within the religions, the different ways in which they fit into different cultures and the accretions each picked up from these cultures, the change from oral to written traditions, and the always present human condition of being in conflict with the authorities of the day. Thus Islam was a natural fit into the existing environment and was not something entirely new and exotic that upset the way the world worked. Under the monotheistic traditions already battling each other in the area, Islam was simply another layer in the mix, another entry into an already riven theological-political landscape.

Violence and Islam is considered on two levels. First is emphasis on the non-violent nature of the rise of Islam. Widely understood that conversion and conquest occurred at the point of a sword, a closer reading of history relates that there was no sword and no push to conversion. Yes there were battles and wars, but much of the success of Islam came from their negotiating success with various antagonists, followed by no requirement to convert their new subjects. Islam has a strong history of accommodation and acceptance of the other two monotheistic religions, a much better record than is demonstrated between the Christian church and its relationship with the Jewish faith or between its own sectarian divisions.

The second concern about violence is in regards to Fukuyama’s work on the clash of civilizations and the supposed “bloody borders” of Islam. Fuller demonstrates that yes, there was at times a bloody boundary between Islam and the west, but that it was temporary, limited in geography, and more related to political and power intersections of trade and culture. The crusades set the tone of western colonial settlement and violence against the eastern world, and as Fuller argues, that would have occurred without Islam, as the Byzantine church posed as much if not more of a threat to Papal authority than anything else.

Fuller also draws in other boundaries where “bloody borders” may or may not have occurred in relation to Islam. One of the bloodier borders was the internal battles of Northern Europe, and as time developed, within Europe, as Christians fought Christians, and eastward towards Russia and the Slavic countries, the Roman papacy battled the Orthodox churches of Constantinople. Islam was not involved with these east-west internal divisions.

When Islam met up with India and its multifaceted religious structure there was minimal violence. Muslim traders fit in well with the very accommodating views of Hinduism. Islam simply became part of the expression of “Hindu syncretism and pantheism,” and “simply joined the pantheon.” A “fusion culture emerged of great brilliance,” making Indian civilization “unrecognizable without the Mughal elements.” This “rich ethnic cross-pollination” came to an end under the onslaught of British imperialism, and while Fuller quantifies his expression with a “maybe,” the implication is “the British imperial control of India over several hundred years -- far more than ‘Islam’ -- that has the most to answer for in contriving this ill-starred and perhaps unnecessary partition that solved nothing.”

China is Fuller’s next example and similarly demonstrates how Islam is perfectly capable of peaceful coexistence rather than “bloody borders,” as the “Han and the Muslim elements have intermixed within broader Chinese culture,” developing a strong synthesis with the non theistic Confucianism. In parts of China there were conflicts, in the predominantly Muslim Turkic Uyghur region of western China. The current problems in China’s west are not so much to do with Islam as it is to do with ethnic minorities and the desire for a national identity in the area.

The decline of the “Muslim world” is presented briefly and clearly. Among the factors were a weakening of the original intellectual vigor of the region, the Mongol invasions from the steppes that “obliterated the cream of the great Muslim urban centers,” the arrival of the Sunni-Shi’ite divide, and the maritime trade that shifted commerce away from the land routes. Added to this was the change in the regions geography with “deforestation, desiccation, and the subsequent diminution of its natural and animal resources.”

The final causes of decline were the imperial ambitions of the major European powers who subjected not just the Middle East, but the rest of the world, as uncivilized areas ready for their control. The bloodshed of empires is a global phenomenon and is not a matter of the “bloody boundaries” of Islam, more so the bloody boundaries of the European empires. These conquests also further inflamed the east-west antagonisms that had initially been a part of the overall mixture of the area.

Fuller argues that with or without Islam, the region would still be a colonial target, the antagonisms would be between nationalisms and ideologies as they were initially within the Middle East. The antagonism was “anti-colonial resistance and not religious war.”

Finally, Fuller closes in on the current Global War on Terror and its aspect of “with us or against us,” of the evil other of Islam and its supposed inherent violent aspect. He demonstrates again the east-west antagonism as the main factor, and not religion as such,

Religion may be invoked as cause and effect, but it is only the current vehicle to transport the region's grievances against the European and U.S.-based imperialism that wishes to control the resources of the region, and was in significant part invoked by the Bush declaration of crusade.

Fuller arrives at some obvious if not easily implemented solutions, and while the book says very little about Palestine and Israel throughout its arguments, they become central to the solutions. Along with calls for military withdrawal from the region, the acceptance of policing rather than military strength, the acceptance of democracy in its true form even should Islamic governments be elected, Fuller’s central solution rests on Palestine:

Starting with a sneaky catchy title that will draw in all ranges of readers, this is an excellent and wonderfully well written historical look at Islam and the manner in which it accommodated to and influenced much of European, African, and Asian history. Fuller has a well presented argument with a clear line of thought, using clear and concise language. He uses general historical data without overloading the reader on small details and obscure arguments. It is a global view and not a narrow parochial view for an established ideology.

Also, it is not an apologetic for Islam, but places it accurately within its historical, theological, political, and nationalist context. While it does discuss some of the core issues within the religions, it is not a theological debate, but discusses religions in context with regional, national, and ethnic interests. The general reader and the avid historian will both find this an excellent addition to discussions on Islam, the Middle East, U.S. and European foreign policy, and all and any other subjects that touch upon current events.