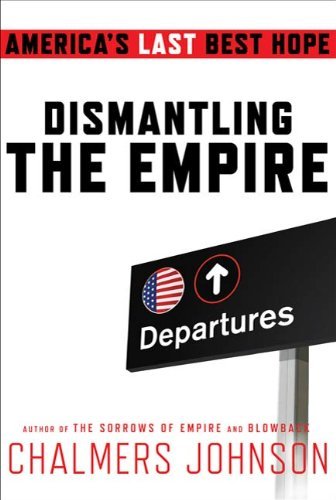 Sept. 25, 2010 (Palestine Chronicle) -- That the empire has caused much trouble and is in trouble itself has been well documented and well explained by many current authors.

Chalmers Johnson, who wrote Blowback -- at the time an unheralded piece of research -- and two more volumes, Sorrows of Empire and Nemesis -- that became the Blowback trilogy -- has since written a series of essays that are concise, clear, hard-hitting, and undeniably for Dismantling the Empire.

The essential theme of the book is that the United States must dismantle its empire or face a future of poverty and strife within a divided nation. As these essays were written over a period of five years, there is some reiteration of information -- particularly on the military bases and their costs and effects on the economy (not to mention all the other costs to the ‘host’ countries). Yet that only reinforces the significance of Johnson’s thesis, as the numbers are somewhat astounding for their significance with both foreign and domestic policy. As the title indicates, to save the United States as a democratic republic, the empire must be dismantled. If not….

There are three main points that Johnson presents his arguments on:

1) The CIA should be shut down.

2) The overseas military bases need to be dismantled.

3) Economy -- the pork-barrelling of politicians within the military-industrial complex also needs to be shut down.

Straight forward. Basic. Logical. Not elegant, but very simple -- at least for conception. If these actions are not taken, Johnson argues, the “long-standing reliance on imperialism and militarism in our relations with other countries and the vast, potentially ruinous global empire of bases that goes with it” will lead to “a devastating trio of consequences: imperial overstretch, perpetual war, and insolvency, leading to a likely collapse similar to that of the former Soviet Union.”

For anyone following current events covering the environment, the economy, and the “war on terror” or the “long war”, these conclusions should be obvious. The introduction ends, commenting, “None of this [is] inevitable, although it may [be] unavoidable given the hubris and arrogance of our national leadership.”

The CIA --  a private presidential army

The CIA is covered in three of the essays, two directly related to its ineptitude. The first essay, “Blowback World,” focuses on events that led into U.S. involvement in Afghanistan and Pakistan, beginning with the CIA’s introduction into covert actions in Afghanistan six months before the Soviet invasion. The CIA was supposedly an intelligence gathering and assessment operation, but included “a vaguely worded passage that allowed the CIA to “perform such other functions and duties related to intelligence affecting the national security as the National Security Council may form time to time direct” -- that turned the CIA into the personal, secret, unaccountable army of the president.”

The CIA’s ineptitude is evident in many areas, from 9/11 through the war on Iraq, and the current imbroglios in Afghanistan and Pakistan (from imbroglio: a complicated and embarrassing state of things; a serious misunderstanding, Webster’s Dictionary). Johnson says of the analysis and sharing of information, “the early-warning functions of the CIA were upstaged decades ago by covert operations.” Even then, the main "successes' of the CIA derived not from skill or intelligence but handfuls of greenbacks. His conclusion: “I believe the CIA has outlived any Cold War justification it once might have had and should simply be abolished.”

This is reiterated in the second essay on the CIA, a review of Tim Weiner’s book Legacy of Ashes: The History of the CIA, where the conclusion is “the CIA has failed badly … and it would be an important step … simply to abolish it.” As for the security of the country being enhanced, after the "blowback" effects of the Mossadegh coup, all the coups and para-military police training in torture and assassination at the School of the Americas, and the Afghanistan mujahideen assistance against the Soviets indicates, the lesson is “that an incompetent or unscrupulous intelligence agency can be as great a threat to national security as not having one at all.”

Johnson’s prime target has been the extensive military bases that encircle the globe. The reason for these bases “is to expand our empire and reinforce our military domination of the world.” The question then is, why dominate the world militarily? Consumption. Money. Resources. “Our empire exists so we can exploit a much greater share of the world’s wealth than we are entitled to, and so we can prevent other nations from combining against us to take their rightful share.”

After all his arguments about the costs of the bases, their effects on other nations and their people, Johnson is even more direct with his evaluation of the outcome if the bases are not dismantled:

“Hanging on to our military empire and all the bases that go with it will ultimately spell the end of the United States as we know it.”

The third factor that is the basic one for all the arguments about the decline and fall of the empire is economic. This concern can be sub-texted in several ways: the costs of the mercenary armies; the pork-barrel economy of a Congress that “is no longer responsive to the people;” the military bases as introduced above; and the industrial economy based within the Pentagon.

Johnson reiterates that the military economy of the United States is more than that of all the other world militaries combined, with many unknowns including the black hole of the unaccountable Pentagon. Another factor is the money used for the military is money not used for infrastructure of anything else like hospitals, transportation, education, or a social safety net, all of which would be much more highly beneficial to the people of the United States. It is impossible to know what ‘innovations’ would or would not have risen from technological knowledge, although previous histories would indicate that technology that has helped humans has operated more or less independently of the various imperial armies of the past. Money spent on the military -- in spite of the pork-barrel politics that disperses the money around every state in many different industries from Lockheed Martin and Boeing to Kodak and Intel to garner leverage for votes in congress -- does not help the economy, but hinders its growth.

One of the largest factors for the economy is the sheer size of the budget for the military, estimated at over a trillion dollars a year, all of which needs to be borrowed from foreign countries. China and Japan are major owners of U.S. debt and could sink the U.S. dollar in an instant if that were required due to unexpected military adventurism that appeared to be endangering their rising prosperity. The consequences of the U.S. military economy is “we face probable national insolvency and a long depression.... the bankruptcy of the United States is inevitable.” [italics added]

The military economy is also affected by the current trend in privatization of garrisoning the bases, the employment of private security firms, and the "public-private" partnerships in U.S. corporate structures that are “a convenient cover for the perpetuation of corporate interests.”

The corporate sector has become a “dominant partner with the state,” fulfilling the argument that fascism should be called corporatism “because it was a merger of state and corporate power.” Because “a corporation [is] less amenable to public or congressional scrutiny,” these relationships “afford the private sector an added measure of security from [public] scrutiny.” The main motive of big business is “to replace democratic institutions with those representing the interests of capital.” This latter point is obvious when the institutions of the "Washington consensus" -- the IMF, World Bank -- and other more obvious corporate entities such as the WTO and the OECD are deciding many of the rules of international economic interaction.

All of which means that democracy is taking a hit. Johnson is quite clear and explicit in the matter -- the United States can either be an empire, or it can be a democracy, it cannot be both. The “consequences for democratic governance” of “military and intelligence functions ... may prove irreparable.”

Could it be made any more clear? Chalmers Johnson has not pulled any punches, nor worded his arguments in polite academic arguments or obscure wording. It seems so simple and obvious to some that serious changes are required if the United States is to be a democracy and a model to the rest of the world rather than an imperial overlord extracting resources at the expense of many lives, the democratic ideal, and much anger and hatred directed at the United States. Using examples of the British and Soviet empires, Johnson concludes “If we do not learn from their examples, our decline and fall is foreordained.” [italics added]

Johnson’s longer works provide ample evidence and arguments to back up his shorter essays (which are also well referenced). Dismantle the Empire is a must read for anyone looking for a quick, concise, and meaningful information concerning the future of the American Empire.