Billy Blanks Still Owes Me $150 (and other tales from my “acting” career) — Mickey Z. 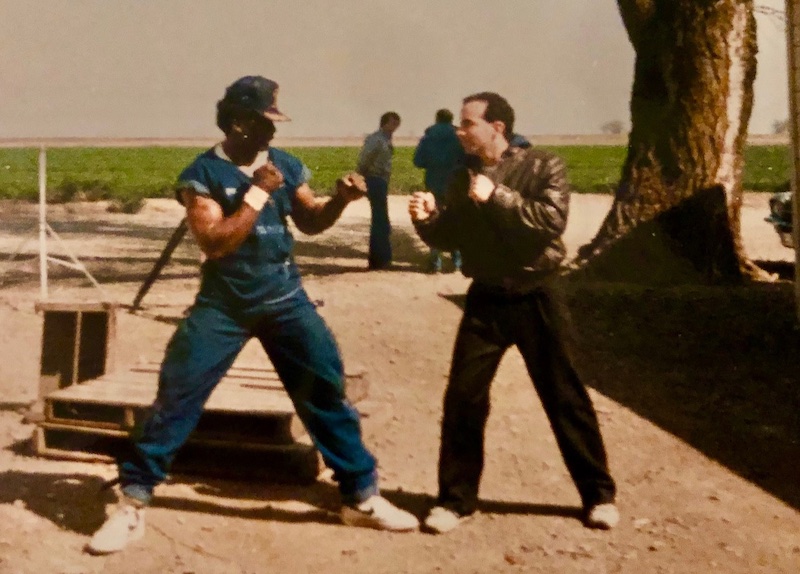 Billy Blanks and me, on the set of Low Blow (courtesy of Mickey Z.)

Like most martial artists of my generation, I dreamt of being the next Bruce Lee. The difference is I went out and did something about it. I studied Bruce’s original style (Wing Chun) and then diligently branched out to learn a wide array of techniques from a wide array of martial artists. In addition, I’ve actually appeared in a dozen or so “films” (yes, I use that term loosely). I’ve still got the movie posters and magazine covers to prove it: 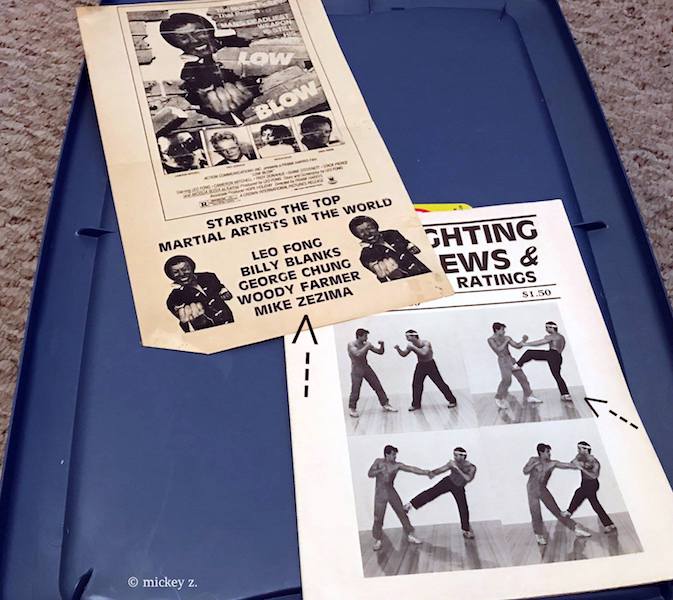 The first chop-socky flick I ever did was called Low Blow and featured none other than a (pre-Tae Bo) Billy Blanks. He and I went out to Stockton, California, to work on a project with a lunch budget that rarely went above the peanut-butter-and-jelly-sandwich level. Regardless, I did have fun with Billy. We trained together, gave a seminar at a local karate school, and I even ended up lending him some cash when he ran out. (FYI: Billy Blanks still owes me $150.) In the Low Blow clip below, you see me for the first 3 seconds but, besides this, I actually had lots of scenes and even some dialogue:

Over the ensuing years, I did manage to move, um… laterally, I guess. All the other movies I worked on were filmed in the NYC metropolitan area so at least I got to sleep at home after toiling all day as a celluloid ghoul or a drug dealer or security guard. The “celluloid ghoul” role was for a movie called Necropolis. Let’s just say it wasn’t exactly an art film. I was subjected to two hours of special effects make-up to look like this: 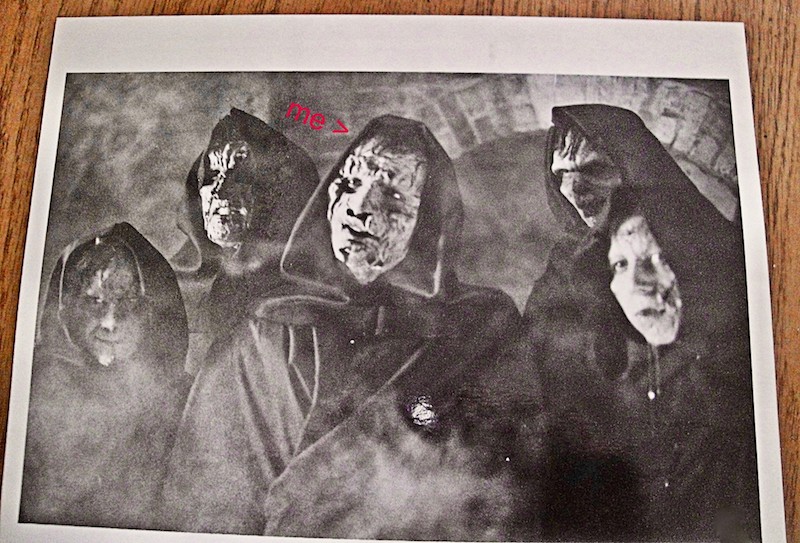 Some of the filmings took place late at night in Central Park, during a time in Big Apple history when absolutely no one in their right mind walked around in there after midnight. Well, I checked that adventure off my bucket list. Another Necropolis location was a catacomb-like collection of dark, dusty rooms underneath and inside the Brooklyn Bridge. One late night culminated with the genius filmmakers setting off a smoke bomb in that tight, enclosed setting. We were all warned to evacuate as soon as we got the signal.

The smoke was released. The signal was given. The entire cast and crew stampeded toward the doors, and I did my best to push past everyone. As I stood there, inhaling some “fresh” NYC air, I witnessed something I will never forget. A massive mischief (yes, that’s the technical term) of rats came rushing and clawing and squealing out behind us — dozens and dozens of them fleeing the smoke as we did. One particularly large specimen ran up a nearby grass hill. The huge rodent rose up on its rear legs and stayed that way, silhouetted by a nearly full moon. Suddenly, my zombie make-up felt completely appropriate. 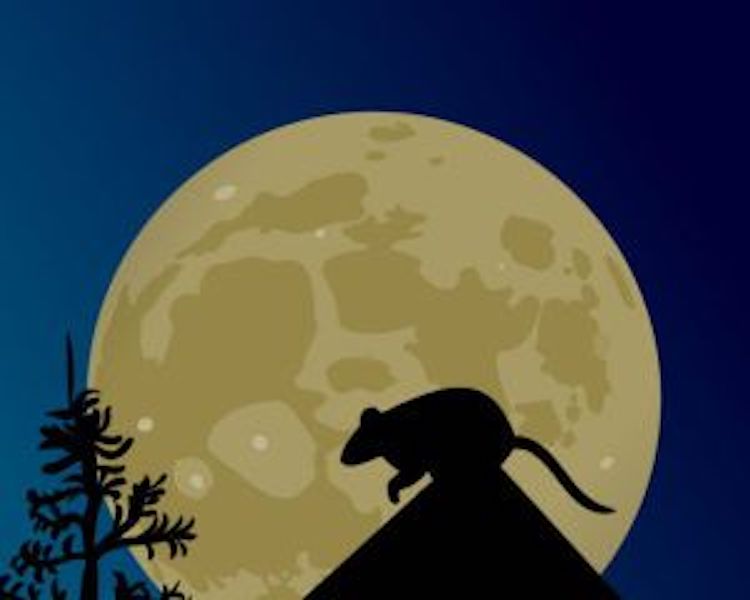 One oppressively warm New York City summer day, I got the call to “act” in yet another super-low-budget classic, Robot Holocaust — produced by the same team that regurgitated Necropolis. This time, I got to work with my buddy, Fast Eddie.

Eddie and I lived in the same neighborhood and worked together as trainers at the Vertical Club, NYC’s poshest health club. Our commutes back and forth to that bastion of elite Manhattan hedonism provided for some fun memories. One time, I was driving us home — bumper to bumper over the 59th Street Bridge. Eddie kept pulling out my tape from the cassette player (remember those?) and putting in one of his own. Already moody from the traffic, I warned him: “You do it again and I’m throwing your tape out the window.”

He called my bluff. Without as much as one second of hesitation, I grabbed the tape and tossed it out the window into oncoming traffic where it was instantly smashed under the tires of a passing car. Fast Eddie fell into a fit of hysterical laughter. It turned out he had smoothly put my tape in the player and that’s the one I tossed to its untimely death.

A few weeks later, I got even while we were riding the train back to Astoria. Eddie was busting my balls, getting some laughs from the pretty young woman sitting across from him. I was in the small love-seat-looking bench in the corner, about ten feet away. The lights went out for a few seconds — like they used to do all the time on the subway — and this gave me an idea. Eddie made another funny comment at my expense, just as the lights went out again. Moving like a ninja, I jumped up and sat right next to him. Three or four seconds later, the lights came back on, and there I was, staring in his face from just inches away. Eddie nearly fainted and this time, the pretty girl was laughing at him.

Anyway, on the set of Robot Holocaust, Eddie and I had dual roles. Yeah, we were so multi-talented that we played both “air slaves” and robots. As air slaves, we fought to the death and that’s primarily why we were hired: we could fight and we looked good doing so in skimpy outfits. As robots, we were so thoroughly ensconced in rubber costumes, there was zero chance that any of the five people who ended up seeing Robot Holocaust would ever identify us as the same loin-clothed gladiators who had just gotten zapped by a ray gun in the previous scene. Watch the zapping here:

The air slave fight scene was filmed inside the squalid Brooklyn Navy Yard with minimal crash padding. By the time we finished (garnering a long round of applause, thank you), we were covered in both dirt and bruises. After considerable complaining, we were given access to the facility's showers. However, we were unaware of these two facts: the drains were clogged and the cats kept in the building to keep rats away appropriated those same showers as their community kitty pan. Within minutes, Eddie and I were standing naked in ankle-deep water with cat droppings floating by. I sensed instinctively that this was not how Brad Pitt got his start.

Back at the Navy Yard the next day, it was even hotter. The slightest motion initiated a gradual process of sweat drenching my frame. Eddie and I donned the aforementioned rubber ensemble and, well… there were problems:

The director, who I’m sure eventually found a new vocation, bellowed at us to proceed faster and look “more imposing” as we negotiated the steps, a pool of perspiration trailing behind us. This provoked more grumbling and, when our scenes were wrapped, a very odd thing transpired: the producers of Robot Holocaust cut us a check right there on the set. This was unusual as both Fast Eddie and I normally had to pester producers for weeks or months to pay us for the work we did.

At that juncture, we correctly ascertained we would not become part of their cinematic repertory company. Anyway, we headed back to Queens for (feline-free) showers and then set out to meet friends at a Van Halen concert. You can be certain our movie set anecdotes that night omitted any allusion to our incessant whining or floating cat feces. 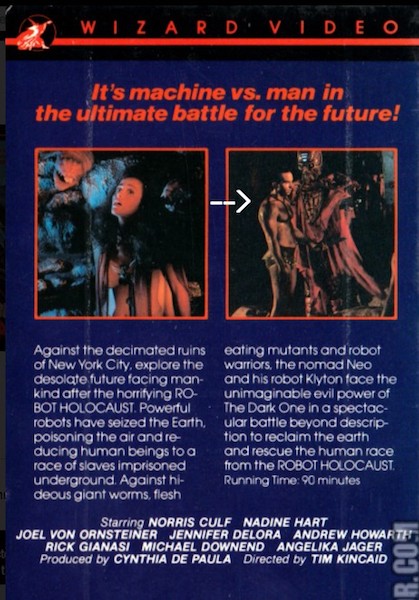 Of course, since those acton movie days, I’ve steered my life in many diverse directions. As for Robot Holocaust, for as long as video stores were still a thing, I appeared on the VHS box (image above). Eat your heart out, Billy Blanks — but I still want my money (with interest)!