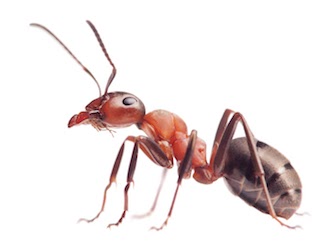 From: domyownpestcontrol.comApril 11, 2017 (Phys.Org) -- Millions of years before humans discovered agriculture, vast farming systems were thriving beneath the surface of the Earth. The subterranean farms, which produced various types of fungi, were cultivated and maintained by colonies of ants, whose descendants continue practicing agriculture today.

By tracing the evolutionary history of these fungus-farming ants, scientists at the Smithsonian's National Museum of Natural History have learned about a key transition in the insects' agricultural evolution. This transition allowed the ants to achieve higher levels of complexity in farming, rivaling the agricultural practices of humans: the domestication of crops that became permanently isolated from their wild habitats and thereby grew dependent on their farmers for their evolution and survival.

In the April 12 issue of Proceedings of Royal Society B, scientists led by entomologist Ted Schultz, the museum's curator of ants, report that the transition likely occurred when farming ants began living in dry climates, where moisture-loving fungi could not survive on their own. The finding comes from a genetic analysis that charts the evolutionary relationships of farming and non-farming ants from wet and dry habitats throughout the Neotropics.

About 250 species of fungus-farming ants have been found in tropical forests, deserts and grasslands in the Americas and the Caribbean, and these species fall into two different groups based on the level of complexity of their farming societies: lower and higher agriculture. All farming ants start new fungal gardens when a queen's daughter leaves her mother's nest to go off and found her own nest, taking with her a piece of the original colony's fungus to start the next colony's farm.

In the lower, primitive forms of ant agriculture -- which largely occur in wet rain forests -- fungal crops occasionally escape from their ant colonies and return to the wild. Lower ants also occasionally regather their farmed fungi from the wild and bring them back to their nests to replace faltering crops. These processes allow wild and cultivated fungi to interbreed and limit the degree of influence the lower ants have over the evolution of their crops.