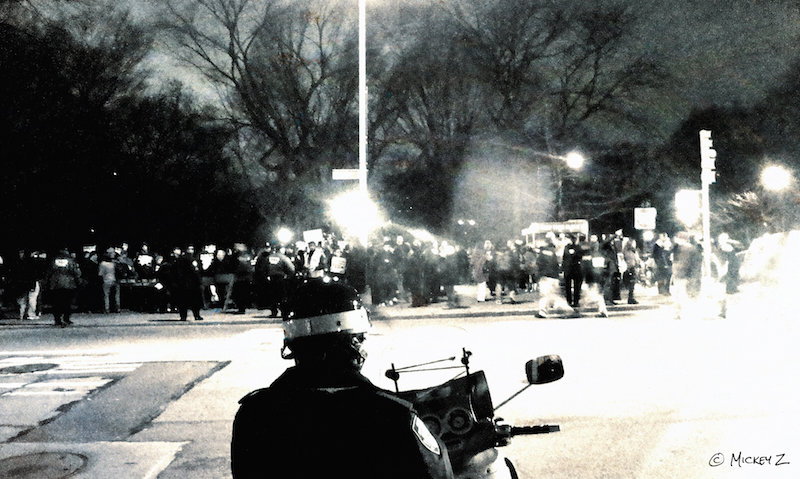 Most of my radical life has been, um, occupied with writing and public speaking. Many books published, articles regularly appearing on high profile lefty sites like Counterpunch and ZNet (both of whom now rarely, if ever, run my work), talks and lectures given from coast to coast, maintaining a popular blog, and even appearing on C-Span -- all this added up to global name recognition and a relatively large readership… and quite the reputation for “gloom and doom.”

Then along came Occupy Wall Street.

Thanks to OWS, I got way more involved in street activism in 2011 which also led me to seriously re-connect with the vegan/animal rights protest scene. Practically overnight, I became an omnipresent and well-liked figure at rallies, marches, and demos all across the NYC area.

I made many new friends and comrades, got to meet longtime readers, and received plenty of props for being more than a “keyboard warrior.” This face-to-face solidarity created genuine optimism and suddenly had folks lauding me for my “positive energy.”

Inevitably, my transition impacted my work. The articles I wrote and the talks I gave were more like rallying cries or pep talks as I sometimes avoided addressing what I should’ve been openly questioning. Looking back now, I recognize that I’d grown uncomfortable with my usual uncompromising approach. It’s not as easy to let loose in an article when you know within the next day or two, you’ll be standing alongside someone you like -- someone who you just may have offended.

All this became less germane as the bloom faded. Movements came and went and I learned yet again that familiarity can indeed breed contempt. What also breeds contempt is my endless evolution. Comrades were definitely not happy when they realized I do not let myself become complacent as a writer, thinker, or activist. From anti-racism to environmentalism to gender politics to food justice and far beyond, I learned the hard way about the insidious and counterproductive power of the activist hive mind.

Conversely, my work also benefitted from my street activism. Being introduced to diverse groups of dissidents sometimes meant being exposed to ideas and perspectives that had been rendered invisible by my privilege. For that, I will be eternally grateful.

Which brings me to the present day…

For many reasons, I attend a lot less protests now. I’ve also found myself re-reading some of my older work through the lens of my recent journey and I feel eager to return to the realm of the resolute, but this time with a whole new language and awareness.

Only time will tell if I can effectively balance sharing an uncompromising voice with being a compassionate comrade, but I will no longer allow myself to hold back for fear of bruising egos or even losing friends.

If what I can bring to the struggle for social justice are words -- written and spoken -- then I owe it to myself and whatever audience I still have to make those words as radically honest as possible.

"Activism: Balancing Distance and Presence" by Mickey Z is licensed under a Creative Commons Attribution-ShareAlike 4.0 International License.
Based on a work at https://worldnewstrust.com/activism-balancing-distance-and-presence-mickey-z