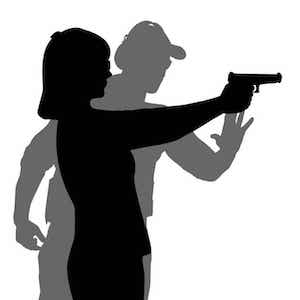 On a recent thunder-filled Saturday, I hosted 10 very green shooters for a basic pistol safety workshop.

Of the attendees, only a couple had previously shot any sort of firearm and a few were visibly jittery as they completed “dry” fire drills with unloaded weapons. Heavy in the air hovered the understanding that, in learning to use lethal violence defensively, we had all accepted the likelihood that our near-futures would, in myriad ways, be informed by bloodshed. No one wanted to be there, training with tools essentially destructive; but we all knew we must be there, preparing for the threats that lie ahead.

It’s worth noting that the folks I’ve trained these past few months, who are no doubt representative of a broader group of new gun owners, aren’t seeking these skills and tools because they are choosing to take risks that might result in confrontation. Rather, my students understand that they are presently more imperiled by violence simply because of who they are: what body parts adorn them; the amount of melatonin their skin holds; whom and how they love or the multitude of other ways they’re othered. While they didn’t consent to being swept into a conflict not of their own making, they are now taking agency over their own roles in the struggle.

Tensions arising from the Covid pandemic and the recent uprisings against police brutality and the nation’s slide towards Trump-flavored fascism have created a gun buying panic unparalleled in U.S. history. Millions of first-time gun owners have largely fueled this run on self-defense supplies, resulting in severe shortages of both weapons and ammunition.

One potential hazard created by this rush to purchase lethal firepower is an associated lack of access to firearms safety training provided by instructors sympathetic to non-traditional (for example: non-cisgendered heterosexual conservative white men) gun “newbies.” And anyone familiar with firearms safety understands that one must undergo considerable training in order to become both safe and effective.

Fortunately, while not yet mainstream, there are growing numbers of resources and organizations aimed at meeting the needs of gun owners wary of treading in a milieu historically monopolized by the National Rifle Association and its overwhelmingly conservative, and increasingly authoritarian, supporters. For example, the Huey P. Newton Gun Club and the National African American Gun Owners’ Association, the latter of which boasts upwards of 30,000 members, are well positioned to help train-up new Black gun owners, who account for a large portion of recent gun sales.

As an anti-authoritarian community defense and mutal aid organization, Western North Carolina’s Black Mountain John Brown Gun Club’s primary function is to help train and arm those directly impacted by the growth of American fascism. Interest in the club has increased dramatically over the last couple months, and it has started a successful firearms safety course serving members of the Queer community and people of color (POCs) who feel increasingly vulnerable as hate crimes carried out by white supremacists become commonplace in Trump’s America.

Strangely, however, John Brown Gun Clubs and other leftist organizations were recently purged by Facebook when the social media giant deleted the accounts of groups they deemed to be violent. This move will no doubt make outreach efforts by well-intended self-defense groups even more challenging, while doing nothing meaningful to address the very real violent threats of white supremacists who continue to use the platform to organize and recruit.

Another such niche outfit is Armed Margins, based near Greensboro, N.C. Its owner and chief instructor, Mitchell Fryer, understands first-hand the need for informed, skilled self-defense. Fryer, whose preferred pronouns are they/them, was a member of Redneck Revolt, a now-defunct anti-fascist militant formation that was called upon by counter-protesters to provide security during the infamous 2017 Charlottesville “Unite the Right” rally.

Charged with protecting those standing in opposition to the largest white supremacist gathering seen in recent history, Fryer and their comrades were some of the first to respond to the violent mayhem that culminated in the murder of Heather Hyer. At another point, they were doxxed by local white supremacists who publicized their family’s personal information in a campaign of death threats and harassment. These events have fueled in Fryer a desire to provide firearms training to marginalized communities, and their skills and compassion have become widely sought after.

Unfortunately, just as interest in self-defense-related instructors and resources geared towards LGBTQ+ and POC communities peaked, the combined forces of state and corporate repression have undermined efforts to safely arm marginalized people. Not surprisingly, many involved with community defense projects are political radicals. The Trump administration’s unhinged, McCarthyist attacks on “antifa” and anarchists, in concert with Facebook’s recent removal of anarchist and anti-fascist users and organizations, will undoubtedly slow the spread of life-saving information, while literally making targets of those standing in opposition to fascistic tyranny.

We witness, with alarming regularity, the effects of this demonization of the “left,” as domestic terrorists weaponize their cars against those protesting against police brutality and as hate crimes perpetrated by Trumpists continue to climb. Kyle Rittenhouse, the young white right-wing militia associate who murdered two protesters at a protest in Kenosha, Wisconsin, has emerged as a hero among conservatives, and was praised by Trump. And in the recent Presidential debate, the President refused to condemn white supremacists, and instead called on the Proud Boys, a known fascist gang, to prepare for violence against leftists who oppose him.

Experts in the gun world expect the current panic buying trend to continue for at least the next several months, as uncertainty over the nation’s political future and unrest over police brutality and Covid tensions intensify. Hopefully, more resources promoting safe and competent firearms handling will become available to members of marginalized communities, for whom self-defense training is becoming an urgent life-and-death necessity.

Harper S. Ferry (he/him) is an anarchist, anti-fascist and educator. He has spent much of the last few years educating people about the perils of fascism, with a focus on community defense work. Additionally, as an educator with nearly 20 years experience in the classroom, Harper has worked to help young people better understand the roles they can play in bringing powerful, perhaps revolutionary, changes to the systems in which they participate. He currently lives in Southern Appalachia with his beloved family, with whom he is frantically working to build mutual aid networks to help those impacted by the collapse of political and economic institutions.

A Surge in Nontraditional Gun Ownership Requires a Surge in Resources by Harper S. Ferry is licensed under CC BY-SA 4.0